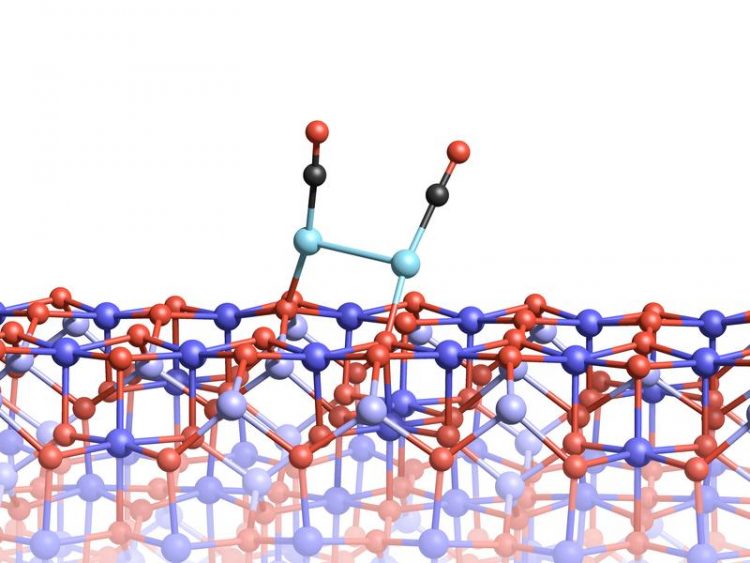 Two platinum atoms on the magnetite surface can bond, if they are attached to CO molecules. TU Wien

At first glance, magnetite appears to be a rather inconspicuous grey mineral. But on an atomic scale, it has remarkable properties: on magnetite, single metal atoms are held in place, or they can be made to move across the surface.

Sometimes several metal atoms on magnetite form small clusters. Such phenomena can dramatically change the chemical activity of the material. Atomic processes on the magnetite surface determine how well certain metal atoms can serve as catalysts for chemical reactions.

Scientists at TU Wien (Vienna), together with colleagues from Utrecht University, can now watch single platinum atoms form tiny clusters. Carbon monoxide plays a dual role in this process: It allows single platinum atoms to move and form pairs, and then it holds these pairs together for a long time. Only by increasing the temperature can the pair-bonds between platinum atoms can be broken.

It sounds a bit like an unhappy love story: “Two platinum atoms would actually like to be together, but the magnetite surface keeps them apart”, says Roland Bliem (TU Wien). Together with Professor Gareth Parkinson, Professor Ulrike Diebold and their colleagues, he analysed the behaviour of platinum atoms using a scanning tunnelling microscope.

“When a platinum atom hits the magnetite surface, it is kept in place by the oxygen atoms in the magnetite. The atoms always end up alone. On other surfaces, pair formation would be favoured, but magnetite does not allow that”, says Roland Bliem. The platinum atoms sit on specific places on the magnetite crystal and cannot get away without outside help.

However, with the appearance of carbon monoxide, the situation changes completely: “A carbon monoxide molecule can attach to a platinum atom and lift it up”, says Gareth Parkinson. “We call that the skyhook effect.” The lifting process frees the atom from the tight grip of the magnetite, and together, the molecule and the platinum atom can start moving around randomly across the magnetite surface.

When one mobilized platinum atom finds another, they can form a bond – as long as both of them are being lifted up by carbon monoxide, diminishing the influence of the magnetite below.

When the temperature is increased to 250°C, the carbon monoxide separates from the platinum atom and the bond breaks up. The two platinum atoms must once again find separate places on the magnetite surface. This effect opens up a strategy to turn clusters into single atoms – an important process in so called “single-atom catalysts”. Sometimes clusters of several atoms are formed. These larger clusters, however, cannot be broken up, even at high temperatures.

“In our scanning tunnelling microscope, we can image the same part of the surface again and again, so that we can create a movie, showing the dancing atoms”, says Roland Bliem. “This is crucial for understanding what really happens on the magnetite surface. We can watch single atoms as they wander across the magnetite surface or bond with each other.

If we only had a picture of the end result, we could not say with certainty, whether one specific structure consists of one, two or more atoms. Only by following the time evolution of the atomic motion, we know which interpretation is correct.” Bliem did not only conduct the experiments, he also performed complex theoretical calculations to explain the peculiar behaviour of the platinum atoms on a quantum mechanical level.

For chemical catalysis, such findings play an important role. “Metals such as platinum are frequently used as catalysts”, says Gareth Parkinson. “But a large cluster of many metal atoms may have completely different chemical properties than single metal atoms sitting separately on a surface. When we want to optimize catalysts, so we must be able to understand and control the behaviour of the atoms. This work is one step further towards that goal.”