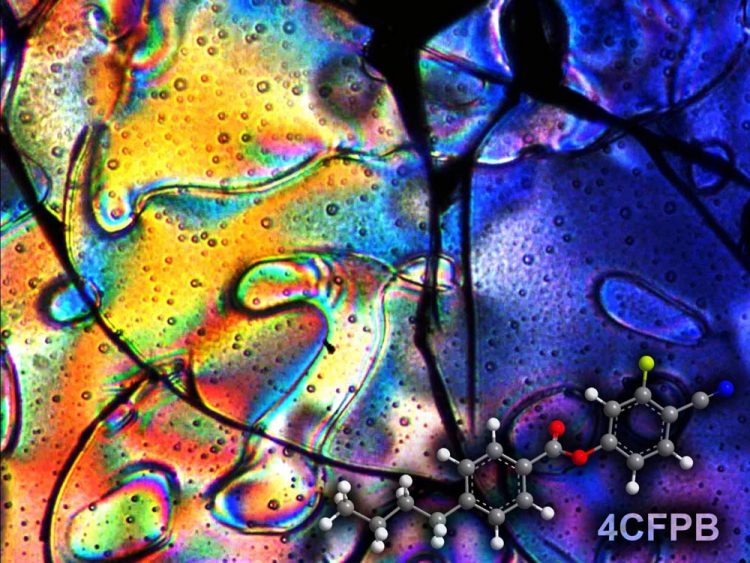 The negative pressure produced in nanopores by liquid crystals can significantly exceed 100 atmospheres. Above: The glass of the nematic phase of liquid crystal studied by scientists from the Institute of Nuclear Physics of the Polish Academy of Sciences in Cracow (Source: IFJ PAN). Source: IFJ PAN

At first glance, negative pressure appears to be an exotic phenomenon. In fact, it is common in nature, and what's more, occurs on many scales. On the scale of the Universe, the cosmological constant is responsible for accelerating the expansion of spacetime.

In the world of plants, attracting intermolecular forces (not: expanding thermal motions) guarantee the flow of water to the treetops of all trees taller than ten metres. On the quantum scale, the pressure of virtual particles of a false vacuum leads to the creation of an attractive force, appearing, for example, between two parallel metal plates (the famous Casimir effect).

“The fact that a negative pressure appears in liquid crystals confined in nanopores was already known. However, it was not known how to measure this pressure. Although we also cannot do this directly, we have proposed a method that allows this pressure to be reliably estimated,” says Dr. Tomasz Rozwadowski from the Institute of Nuclear Physics of the Polish Academy of Sciences (IFJ PAN) in Cracow, the first author of a publication in the Journal of Molecular Liquids.

The Polish physicists investigated a liquid crystal known as 4CFPB, made up of 1.67 nm long molecules with a molecular diameter of 0.46 nm. Experiments without nanopores, under normal and elevated pressure conditions (up to around 3000 atmospheres), were carried out at the University of Silesia in Katowice.

In turn, systems in silicon membranes with non-intersecting nanopores with a diameter of 6 and 8 nanometres were examined at the University of Leipzig (Germany). The geometry of the nanopores meant that there was room for only a few molecules of liquid crystal next to each other, with the long axes positioned along the walls of the channel.

The experiments looked at changes in various parameters of the liquid crystal (including dielectric dispersion and absorption). The measurements made it possible to conclude that an increase in pressure was accompanied by a slowing down of molecular mobility. However, the narrower the channels in which the molecules of liquid crystal in the nanopores were, the faster they moved.

The data also showed that the density of the liquid crystal molecules increased with increasing pressure whilst in the nanopores it decreased. There was also a change in the temperatures at which the liquid crystal passed from the liquid isotropic phase (with molecules arranged chaotically in space) to the simplest liquid crystalline phase (nematic; the molecules are still chaotically arranged, but they position their long axes in the same direction), and then to the glassy solid phase. As the pressure increased, the temperatures of the phase transitions increased. In the nanopores – they decreased.

“With increasing pressure, all the parameters of the liquid crystal we examined changed conversely to how they changed in nanopores with decreasing diameters. This suggests that the conditions in the nanopores correspond to a reduced pressure. Since the liquid crystal molecules in the channels try to stretch their walls, as if they were expanding, we can talk about negative pressure, relative to atmospheric pressure which constricts the walls,” says Dr. Rozwadowski.

“Our research is fundamental in nature, it provides information about the physics of phenomena occurring in liquid crystals constrained in nanopores of varying diameters. However, liquid crystals have many applications, for example in displays, optoelectronics, and medicine, so each new description of how these substances behave on the nanoscale in such specific spatial conditions may carry practical information,” stressed Dr. Rozwadowski.

Research on liquid crystals under spatial limitations was funded by the SONATA grant from the National Science Centre.

http://www.ifj.edu.pl/
The website of the Institute of Nuclear Physics Polish Academy of Sciences.

http://press.ifj.edu.pl/
Press releases of the Institute of Nuclear Physics Polish Academy of Sciences.

IFJ190424b_fot01s.jpg
HR: http://press.ifj.edu.pl/news/2019/04/24/IFJ190424b_fot01.jpg
The negative pressure produced in nanopores by liquid crystals can significantly exceed 100 atmospheres. Above: The glass of the nematic phase of liquid crystal studied by scientists from the Institute of Nuclear Physics of the Polish Academy of Sciences in Cracow (Source: IFJ PAN).