Light defines its own protected path 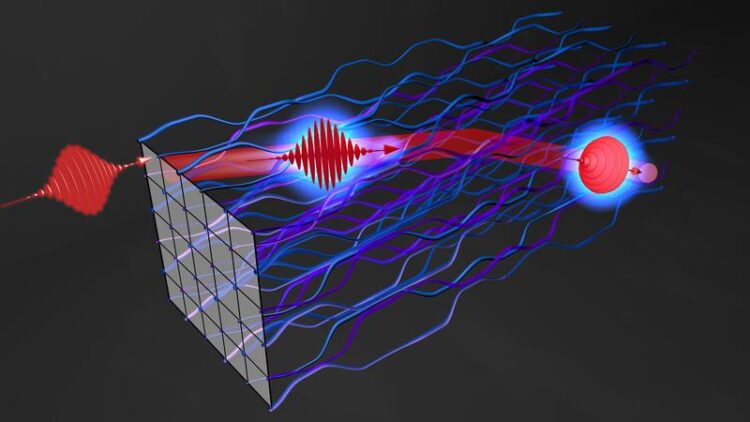 Researchers from the University of Rostock have developed a novel type of nonlinear photonic circuitry in which intense light beams can define their own path and, in doing so, render themselves impervious to external perturbations. This discovery was recently published in the renowned journal “Science”

Researchers from the University of Rostock have developed a novel type of nonlinear photonic circuitry in which intense light beams can define their own path and, in doing so, render themselves impervious to external perturbations. This discovery was recently published in the renowned journal “Science”.

“Photons are an unruly bunch,” explains Professor Alexander Szameit, whose group carried out the groundbreaking experiments. “As soon as one manages to herd them towards one specific point in space and time, they immediately disperse once again in all directions.” Indeed, centuries of research have been devoted to shaping the flow of light by a number of means: Lenses and curved mirrors can tightly focus rays from the sun. Powerful lasers generate coherent beams and short pulses of intense light. And fiber-optic cables deliver staggering amounts of optically encoded data across the world wide web. Yet, light waves are surprisingly delicate entities: A small crack in a lens, a mote of dust drifting through a laser beam, or a kink in the fiber can upset the intricate mechanisms that transform light into perhaps the most versatile tool ever harnessed by humanity.

Electronic topological insulators – solids that do not conduct electricity inside their bulk, yet at the same time are perfectly conductive along their surface – have been experimentally realized for the first time in 2007 by Laurens Molenkamp and his team at the University of Würzburg. Their photonic counterparts have fascinated Prof. Szameit for a long time. “Ever since our first implementation of a topological insulator for light, we have strived to discover how these peculiar systems can be utilized,” the physicist remembers.

While photonic topological insulators can guide light along precisely defined paths, and the mathematical framework underpinning their design endows them with an unprecedented degree of robustness towards imperfections or external perturbations, these sought-after properties also present a formidable obstacle. “Once injected into a topological channel, light pulses do not suffer from scattering losses, but this insulation also makes them virtually impossible to control without breaking them out of their protective environment”, coauthor Dr. Matthias Heinrich summarizes the challenge currently faced by the scientific community.

Of course, on paper, the solution may seem obvious. “In principle, it’s easy. All you need is a switch that you can flip at will to instantly change the topological properties of the system between two light pulses,” quips Szameit. However, topology is inextricably linked to the physical arrangement of the waveguide circuit, while ultrashort laser pulses are measured in femtoseconds (a millionth of a billionth of a second) – many orders of magnitude beyond the reach of even the fastest electronic modulators.

In close collaboration with theorists from the University of Rostock, the ICFO in Barcelona, the University of Lisbon and the Moscow Institute for Science and Technology, the team of young researchers found a way to instead let the light itself decide whether to engage topological protection or to behave as if in a conventional medium. “Depending on their peak intensity, optical pulses can behave in fundamentally different ways,” elaborates Lukas Maczewsky, Ph.D. student and leading author of the work. “Nonlinearity is the magic word: In photonics, sometimes two plus two really is more than just four.” After two years of intense research and countless hours in the labs of the Institute of Physics at the University Rostock, these efforts came to fruition.

The nonlinearity-induced topological insulator – a novel synthetic material – allows light pulses above a certain threshold intensity to establish a transient topological domain in their immediate vicinity. “Just like the U.S.S. Enterprise raises its shields, the self-generated protective cocoon follows

the light pulses and preserves them along their chosen path” the self-avowed Star Trek fan Szameit paints a vivid picture of the complex physics at play.

The successful international collaboration has substantially advanced fundamental science in the field of quantum optics and in particular the research into photonic topological insulators. Until these pieces can be assembled into a workable optical quantum computer – the holy grail pursued by groups all around the world – several challenges remain to be resolved. Nevertheless, the physicists’ newest discovery holds great promise for numerous innovative applications such as topologically protected all-optical signal processing and self-improving photonic neuronal nets. Given the rapid pace of progress, these ideas that today may seem like science fiction, could soon become reality.

The research was funded by Deutsche Forschungsgemeinschaft and the Alfried Krupp von Bohlen und Halbach-Foundation.