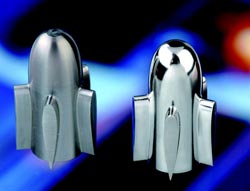 Untreated and laser-polished component of the ventricular assist system INCOR made out of titanium.<br>Fraunhofer ILT, Aachen/Germany<br>

Led by the Fraunhofer Institute for Laser Technology ILT, a consort of seven project partners addressed the task of reducing the time needed to process dental and blood-carrying implants while maintaining their high bio- and haemocompatibility. To accomplish this, a flexible and cost-effective plant, among others, was developed to automatically polish implants.

The surface quality of an implant plays a significant role if it is to be deployed in the body successfully. For example, bone implants require a porous structure so that cells can grow into them well. Other implants, however, need as smooth a surface as possible to keep bacteria from finding a hold on them and the surrounding tissue from being damaged. The project “MediSurf” has made these kinds of implants the object of its research, which has recently come to an end.

A main focus was to optimize the surface of the titanium ventricular assist system INCOR, made by the company Berlin Heart. The project aimed at reducing production time and, at the same time, guaranteeing high haemocompatibility. This means the implant should leave blood corpuscles undamaged and corpuscles should be prevented from settling on it to the largest extent possible. Blot clots are prevented from forming, thus significantly reducing the risk of heart attacks and strokes.

Initially, the question had to be resolved if laser-based polishing of the surface can reach the same haemocompatibility as obtained with conventionally used manual polishing. To answer this, researchers at the Fraunhofer ILT developed a process to polish blood-carrying implants with lasers. “We are able to reduce the micro-roughness to such an extent that the implant exhibits the best possible haemocompatibility. However, we began with very little information on exactly what quality the surface had to have for this purpose,” explains project leader Christian Nüsser from the Fraunhofer ILT. “For this reason, we had to test various parameters to reach the desired result.”

The implants were tested as to their haemocompatibility by the University Hospital Münster (UKM). The result: laser-polished implants exhibit the same haemocompatibility as those polished manually, but laser polishing is 30 to 40 times faster than manual polishing. With large lot sizes, this means an enormous reduction in production costs. In addition, laser polishing exhibits a higher reproducibility. It guarantees a homogeneous smoothness over the entire surface of a free-form geometrical component, even on corners and edges, which are difficult to reach when polished manually. Unlike in conventional processes, the edges are not rounded off when polished with lasers, thus guaranteeing a high geometrical accuracy of the component. Another advantage of laser polishing lies in its far cleaner and more environmentally friendly process. In contrast to manual polishing, no polishing or abrasive materials are used, leaving no chemical residues remaining on the implant itself.

Alongside this polishing process, a prototype plant has been developed at the Fraunhofer ILT for automated laser polishing of implants. For the first time, the scientists have developed a glove box with a six-axis articulated robot, which can grasp the implants and process a complete series of them on its own. This automated machine engineering makes the entire process less expensive, more flexible and appropriate for industrial series production.