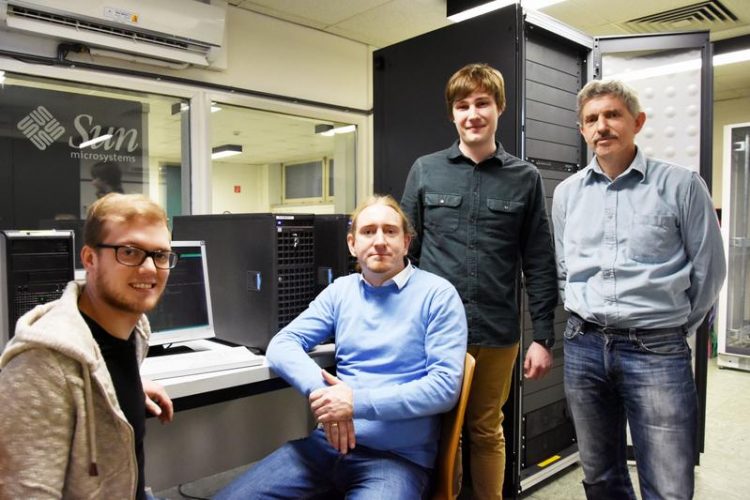 Using their supercomputer at Kiel University Niclas Schlünzen, Karsten Balzer, Jan-Philip Joost and Professor Michael Bonitz (from left) could describe, for the first time, the ultrafast electronic processes that are caused by energetic plasma ions hitting a nanostructured solid. Co-author Maximilian Rodriguez Rasmussen (not in the picture) also made a major contribution to the study. © Siekmann, CAU

Plasmas – hot gases consisting of chaotically-moving electrons, ions, atoms and molecules – can be found inside of stars, but they are also artificially created using special equipment in the laboratory.

If a plasma comes in contact with a solid, such as the wall of the lab equipment, under certain circumstances the wall is changed fundamentally and permanently: atoms and molecules from the plasma can be deposited on the solid material, or energetic plasma ions can knock atoms out of the solid, and thereby deform or even destroy its surface.

A team from the Institute of Theoretical Physics and Astrophysics at Kiel University (CAU) has now discovered a surprising new effect, in which the electronic properties of the solid material, such as its electrical conductivity, can be changed in a controlled, extremely fast and reversible manner, by ion impact. Their results were recently published in the renowned journal “Physical Review Letters”.

For more than 50 years, scientists from the fields of plasma physics and materials science have been investigating the processes at the interface between plasmas and solids.

However, until recently the processes that occur inside the solid have been described only in a simplified manner. Thus, accurate predictions have not been possible, and new technological applications are usually found via trial and error.

Kiel scientists have also been investigating the plasma-solid interface for many years, developing new experimental diagnostics, theoretical models and technological applications. But in their recently-published study, the research team led by Professor Michael Bonitz achieved a new level of simulation accuracy.

They examined the processes in the solid with high temporal resolution and could follow “live”, how solids react when they are bombarded with energetic plasma ions.

To describe these ultrafast processes on the scale of a few femtoseconds – a femtosecond is one quadrillionth of a second – the team applied precision many-particle quantum-mechanical simulation methods for the first time. “It turned out that the ions can significantly excite the electrons in the solid.

As a consequence, two electrons may occupy a single lattice position, and thereby form a so-called doublon,” explained Bonitz. This effect occurs in certain nanostructures, for example in so-called graphene nanoribbons.

These are strips made from a single layer of carbon atoms, which are presently attracting high interest for future applications in nanoelectronics, due to their unique mechanical and electrical properties that include extremely high flexibility and conductivity. Through the controlled production of such doublons, it may become possible to alter the properties of such nanoribbons in a controlled way.

“In addition, we were able to predict that this effect can also be observed in optical lattices in ultra-cold gases,” said Bonitz. Thus, the results of the Kiel scientists are also of importance even beyond the boundaries of the field of plasma-solid interaction. Now, the physicists are looking for the optimum conditions under which the effect can also be verified experimentally in plasmas created in the laboratory.

Photos are available to download:
https://www.uni-kiel.de/de/pressemitteilungen/2019/014-Plasmaeffekt.jpg
Caption: Using their supercomputer at Kiel University Niclas Schlünzen, Karsten Balzer, Jan-Philip Joost and Professor Michael Bonitz (from left) could describe, for the first time, the ultrafast electronic processes that are caused by energetic plasma ions hitting a nanostructured solid. Co-author Maximilian Rodriguez Rasmussen (not in the picture) also made a major contribution to the study.
© Siekmann, CAU

Details, which are only a millionth of a millimetre in size: this is what the priority research area “Kiel Nano, Surface and Interface Science – KiNSIS” at Kiel University has been working on. In the nano-cosmos, different laws prevail than in the macroscopic world – those of quantum physics. Through intensive, interdisciplinary cooperation between physics, chemistry, engineering and life sciences, the priority research area aims to understand the systems in this dimension and to implement the findings in an application-oriented manner. Molecular machines, innovative sensors, bionic materials, quantum computers, advanced therapies and much more could be the result. More information at http://www.kinsis.uni-kiel.de