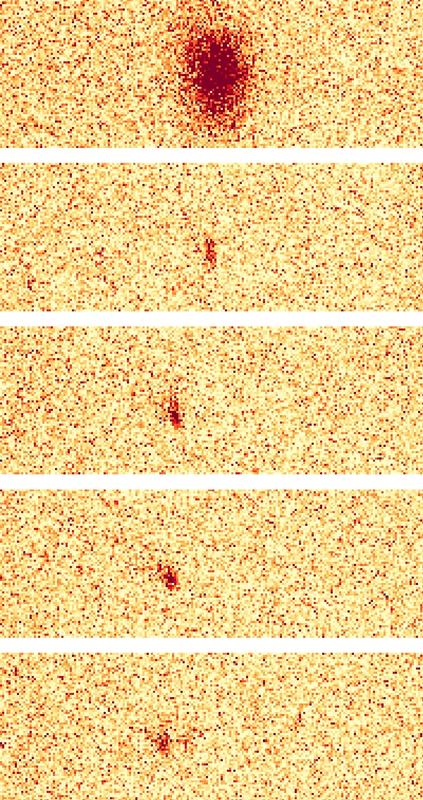 Diffusion is a universal physical phenomenon, describing the motion of particles in their particular environment, whether solid, liquid or gaseous. The first observation of Robert Brown and the subsequent explanation by Albert Einstein are already more than a hundred years old: Robert Brown observed the random, irregular dithering movement of pollen in a liquid.

Albert Einstein and his colleague Marian Smoluchowski interpreted this “Brownian motion” correctly as a result of random collisions of molecules of the liquid with the pollen. The diffusion in complex systems goes one step further and can have very diverse characteristics: Tumor movement in living organisms, DNA transport within cells, ion flow in batteries, moving atoms on surfaces – all these are diffusion processes in complex systems.

Uncovering of the underlying mechanisms is of great interest as these could reach far into daily applications one day. Physical studies of ultracold atoms, carried out at the University of Kaiserslautern, now provide an understanding of diffusion in periodic structures, relevant for various complex systems.

Physicists at the University of Kaiserslautern together with scientists from the Universities of Erlangen-Nuremberg and Kyoto in Japan have made an important step towards the fundamental understanding of complex diffusion and the interpretation of their experimental data. For the study, published in the prestigious journal Nature Physics, the Kaiserslautern team around Professor Widera (Department of Physics and State Research Center OPTIMAS) developed a novel model system:

A single atom is cooled by lasers near to absolute zero temperature and trapped by light within a near-perfect vacuum. The atom is then transferred into an environment of a light field in which the light-absorption and light-emission of the atoms act as collisions with other particles. In this environment, the diffusion can be readily set and the motion of the atom be tracked by a camera.

In parallel, theoretical physicists from Erlangen-Nuremberg and Kyoto developed a model for the description of the dynamics of the system. A central aspect here was to understand the processes in terms of the physical phenomenon of ergodicity. Due to the excellent agreement between experiment and theory, diffusion processes can now be understood beyond Brownian motion. These results have potentially an impact on the understanding of various complex systems in medicine, biology, physics and engineering in the future.

The motion of individual cells in the body or the transport of charge carriers in energy storage systems can be understood only in the context of the particular environment. The particles within the environment encounter permanent collisions with a cell or a carrier, thus influencing their motion. These processes can in many cases be described through Brownian motion by Einstein’s theory. Sometimes the observations can, however, not be described within this model, and in some cases this non-Brownian dynamics are not obvious at first glance. The scientists of the three universities have succeeded in showing both theoretically and experimentally, how the diffusion in certain complex systems can be characterized.

Ergodicity is a key to understanding complex diffusions

A central aspect of the study was to investigate the atomic system on time scales that are relevant for the establishment of ergodicity. Ergodicity is a basic assumption of thermodynamics and an important factor for the description of diffusion processes. In simple words, the ergodicity hypothesis states that in an ensemble of particles, the motion of a single particle is representative for the entire ensemble. This assumption is usually valid for all observed phenomena in our everyday lives. Strictly seen, this applies, nevertheless, for most systems only on very long time scales. The scientists could now show in their study that even seemingly “normal” diffusion processes in certain cases may violate ergodicity on surprisingly long time scales. These findings have interesting implications for understanding the diffusion in complex systems and can help, for example, to re-evaluate and interpret observations and measurements in biological systems.

The study was published in the renowned journal “Nature Physics”: „Nonergodic diffusion of single atoms in a periodic potential“.
DOI: DOI 10.1038/nphys3911