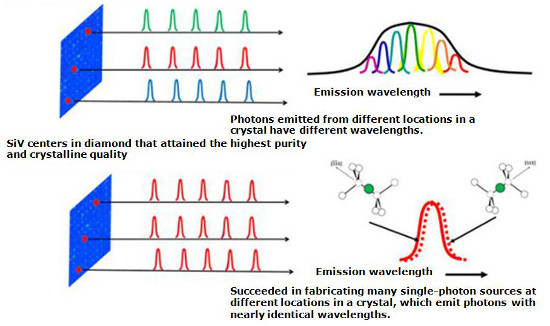 A research group led by Junichi Isoya, professor emeritus, University of Tsukuba and Tokuyuki Teraji, principal researcher, Optical and Electronic Materials Unit, NIMS, has successfully fabricated for the first time in the world single-photon sources of SiV (silicon vacancy) centers – one of the color centers in diamond during the growth of thin film diamond, which have high purity and crystalline quality – by introducing them at extremely low concentrations.

By using this advanced technology to grow diamond thin film, the research group succeeded in fabricating many bright and stable single-photon sources at different locations in a crystal.

Furthermore, the group obtained nearly identical emission spectra, with an spectral overlap of 91 %, between two photons emitted from two single-photon sources that were fabricated at different locations in a crystal.

These results are promising as a key step toward the realization of using single-photon sources in solid matter applied to such fields as quantum optics, quantum computing and quantum information networks that involve quantum interference.

This research was jointly carried out with Fedor Jelezko, a professor at the University of Ulm in Germany, as part of Japan-Germany joint research (in nanoelectronics) on “quantum computing in isotopically engineered diamond,” supported by the JST Strategic International Collaborative Research Program.