Iron in the sun: a greenhouse gas for X-ray radiation 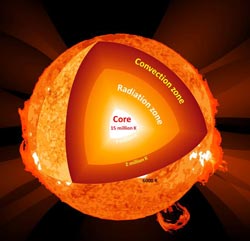 Illustration of the inner structure of the Sun: The energy released by nuclear fusion of hydrogen to helium in the Sun’s core is transported outwards via radiation. In the outer shell energy transfer is dominated by convection.<br><br>Graphics (modified by MPIK): Kelvinsong, Wikimedia Commons http://commons.wikimedia.org/wiki/File:Sun_poster.svg<br>

Scientists from the Heidelberg Max Planck Institute for Nuclear Physics (MPIK) in cooperation with DESY (Hamburg) at the synchrotron PETRA III have investigated for the first time X-ray absorption of highly charged iron ions.

A transportable ion trap developed at MPIK was used for generation and storage of the ions. The high-precision measurements provide important new insight into the role of highly charged ions in astrophysical plasmas, e. g. for radiation transport inside stars. [Physical Review Letters, September 5, 2013]

Highly charged ions – that is, atoms which have been stripped off most of their electrons – play an important role in astrophysics. Within the large accumulations of visible (luminous) matter in the universe, the highly charged state is the natural one. This is the case in stellar atmospheres as well as in the interior of stars, where temperatures of several million degrees Celsius rule. Highly charged ions also abound around exotic objects such as neutron stars or black holes. Before matter plunges into their cores, it delivers gravitational energy, heating up and emitting extremely intense X-rays, which can be observed.

X-rays also determine the energy transport inside the Sun. At its core temperature of 15 million degrees, a natural fusion power plant runs with a total capacity of about 4•10^26 watts. The power density of 200 watts per cubic meter is, however, modest, and corresponds to about that of a compost heap. In contrast to such, the Sun is very large. If the solar core would freely radiate X-rays at those temperatures, a power exceeding the fusion energy yield by 11 orders of magnitude would be lost. The sun works because the radiation transport to the outside is inhibited, thus maintaining the high core temperature. Convection, the heat transport by turbulent upstream flows of hot matter, only takes place further outward, starting at about 70% of the solar radius. This good insulation reduces hydrogen consumption and extends the duration of fusion in our central star to the billions of years that are needed for the formation of a stable planetary system, and ultimately for the development of life.

A measure of the inhibition of radiation transport is the ‘opacity’ of the solar matter, a term describing how efficiently radiation is absorbed by it. Although the Sun consists mainly of hydrogen and helium, these elements only play a secondary role for the opacity. Their share of it diminishes from about 50% in the outer core to below 20% in the radiation zone. Crucial there are the tiny impurities (about 1.6% by mass) of heavier elements, dubbed by astronomers ‘metals’. Besides oxygen, iron, with its mass fraction of only 0.14%, plays for X-rays the role of a greenhouse gas, and contributes about a quarter of the total opacity. To illustrate it: the total amount of iron in the sun would reach for a solid wall of about 100 km thickness at the edge of the radiation zone, at 500,000 km radius. As a dilute impurity in the solar plasma, iron takes a substantial role in the X-ray shielding.

In order to better understand the role of these stellar ‘trace gases’ and obtain reliable data for comparison with astronomical observations, physicists in the team of José R. Crespo López-Urrutia from the Heidelberg Max Planck Institute for Nuclear Physics (MPIK) have prepared, in cooperation with colleagues from DESY (Hamburg) and eight other institutions worldwide, highly charged iron ions in eight different charge states and studied them systematically. PhD student Jan Rudolph and his colleagues installed a mobile electron beam ion trap (EBIT) for the production and storage of highly charged ions at the PETRA III storage ring. This facility provides one of the world's most powerful X-ray beams, which was focused onto the trapped ions and tuned in its energy. In this way, the absorption of the X-ray radiation by the iron ions could be measured for the first time, and with high precision. This new laboratory astrophysical data show a good agreement with the latest theoretical calculations. In addition to the characteristic energies of the absorption lines found in the spectra, their natural line width (for the first time measured in this experiment) is also very important, because it determines the maximum radiant power which a single iron ion can handle. It amounts almost one watt per ion for the observed X-ray transitions. Even within the solar core, iron ions are not yet saturated with respect to radiation transport, because they can absorb and emit X-ray photons a million times faster than normal atoms can do with the much less energetic visible photons. This combination of high rates and high photon energy crucially determines the dominance of iron in the solar radiation balance.

The new data provide valuable insights for the opacity calculations that can be used as the basis of stellar models. In addition, they also help in the diagnostics of astrophysical plasmas, such as those surrounding active galactic nuclei, or in binary systems containing compact objects – such as neutron stars or black holes – accreting matter from the partner star. The iron X-ray lines studied here are usually the last spectroscopic witnesses of such processes.