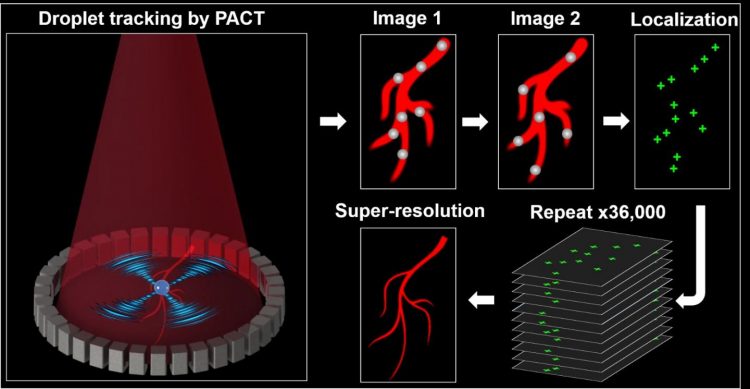 However, by detecting ultrasonic waves, PACT cannot escape the doom that is faced by all wave-based imaging techniques: the diffraction of waves presents a fundamental limit on its spatial resolution. Due to ultrasonic diffraction, an absorbing point source is spread out as a disk (point spread function) in its image, which has a size comparable with the ultrasound wavelength.

Therefore, structures in tissues are smeared out by this disk and blurred, and any features that are separated by a distance smaller than the ultrasound wavelength cannot be resolved. Although finer resolution can be achieved by detecting ultrasound with shorter wavelengths, the attenuation of ultrasound in tissues becomes stronger accordingly, limiting penetration.

Recently, researchers at the Caltech Optical Imaging Laboratory, directed by Lihong Wang, developed a technique for in vivo super-resolution PACT. It breaks the acoustic diffraction limit by localizing the centers of single dyed droplets flowing in blood vessels. This technique resolves brain blood vessels at a six-fold finer resolution. The research has been published in Light: Science and Applications.

The researchers fabricated 'photoacoustically bright' oil-in-water droplets using a solution of a hydrophobic dye, namely, IR-780 iodide in oil. The sizes of the droplets range from 4 to 30 microns, which are much smaller than the wavelengths of the detected ultrasound, making them excellent photoacoustic point sources.

Taking advantage of their small sizes, liquid compliance, and high photoacoustic 'brightness', once injected into the bloodstream, the droplets flow smoothly in blood capillaries and provide excellent tracers for localization-based super-resolution imaging.

By injecting the droplets into brain vessels of live mice, the researchers achieved super-resolution PACT in three steps. The first step is to image single dyed droplets with single laser shots. The data acquisition time of PACT (~50 μs) is so short that the flowing droplets are almost frozen in each frame.

The number of the injected droplets was controlled so that droplets are separated by more than half an acoustic wavelength, which guaranteed the image of each one (the disk) does not overlap with those of its neighbors.

The second step is to determine the exact position of each droplet by finding the center of its point spread function. Because the droplets are well-separated, their centers can be localized with precisions that are much smaller than the ultrasound wavelength. Taking advantage of droplet flow, droplets in closely separated vessels can be spatially resolved as long as they do not show up in the same image frame.

The final step is to repeat the imaging and localizing processes until a sufficient density of source points has been obtained. The researchers continuously acquired 36,000 image frames and localized a total of 220,000 droplets.

By marking the positions of all of these point sources in one image, a super-resolved image can be built up, which represents a finer-resolved vascular network since the droplets are confined within the vessels.

The spatial resolution of this image exceeds the diffraction limit, because it is determined by the accuracy with which the position of each droplet can be estimated. In addition to the resolution enhancement, tracking the flowing droplets also allowed the researchers to characterize the blood flow speed in the deep brain of live mice.

Super-resolution PACT of microvasculature has an exciting prospect. The technique has the potential to substantially advance the study of normal blood-vessel function, as well as disease, such as angiogenesis in tumors in deep tissue.