Icy giant planets in the laboratory 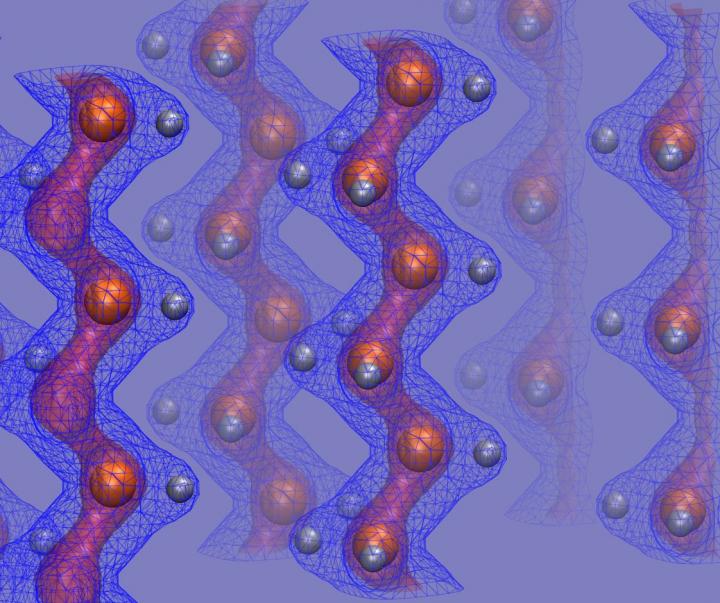 Even under extremely high pressure, such as those in the interior of Neptune or Uranus, there are stable crystal structures of carbon (orange) and hydrogen (gray). This discovery by HZDR researchers reveals new possibilities for the inner structure of the ice giants. Credit: HZDR / J. Vorberger

Giant planets like Uranus and Neptune may contain much less free hydrogen than previously assumed. Researchers from the German Helmholtz-Zentrum Dresden-Rossendorf (HZDR) drove shock waves through two different types of plastic to reach the same temperatures and pressures present inside such planets, and observed the behavior using ultra-strong X-ray laser pulses. Unexpectedly, one of these plastics kept its crystalline structure even at the most extreme pressures reached. Since the icy giant interiors are made up of the same components as the plastic, planetary models may need to be partially reconsidered, as reported in the journal Scientific Reports (doi: 10.1038/s41598-019040782-5).

Carbon and hydrogen are among the most abundant elements in the universe, and are a major constituent of icy giant planets such as Uranus and Neptune. In the outer atmosphere, these atoms are found in the form of methane gas, but deeper inside the high pressure can lead to more complex hydrocarbon structures. Predicting the phases and structures that material takes at these conditions is one of the big questions of planetary research.

In order to better understand the structure of the ice giants, an international team led by the two HZDR researchers Dr. Nicholas Hartley and Dr. Dominik Kraus investigated two types of plastic in a laboratory experiment: polystyrene and polyethylene. These materials are similar in chemistry to the hydrocarbon inside the planets. At the SLAC National Accelerator Laboratory in the US, the scientists exposed the samples to conditions predicted to be present around ten thousand kilometers below the surface of Neptune and Uranus. At this depth, the pressure is almost as high as in the core of the earth and two million times higher than the atmospheric pressure on the earth's surface.

At such high pressures and temperatures, the only possible structure that the researchers expected was diamond, or that the samples would be melted. Instead, they observed stable hydrocarbon structures up to the highest pressures reached, but only for the polyethylene samples. “We were very surprised by this result,” says Hartley. “We did not expect the different initial state to make such a big difference at such extreme conditions. It's only recently, with the development of brighter X-ray sources, that we're able to study these materials. We were the first to think that it might be possible – and it was.”

Since the extreme conditions inside the ice giants on Earth can only be reached for a brief moment, the researchers need lightning-fast measurement methods. There are only a handful of ultrafast X-ray laser facilities worldwide, and time for measurements is rare and highly demanded. Kraus and Hartley were awarded a total of three twelve hour shifts for their experiments, and so had to use every minute to carry out as many measurement runs as possible. The actual moment where they shock the sample and probe with the X-ray laser takes only a few billionths of a second.

Even during the experiments, the researchers were able to recognize initial results: “We were very excited because, as hoped, polystyrene formed diamond-like structures of carbon. For polyethylene, however, we saw no diamonds for the conditions reached in this experiment. Instead, there was a new structure that we could not explain at first”, Hartley recalls. By comparing the data with previous results at lower pressures, they identified it as a stable structure of polyethylene, which had been seen at five times lower pressure, and only at ambient temperatures.

The discovery of the research team demonstrates how important it is to better characterize the temperature and pressure conditions inside the ice giants, and the chemistry that these lead to, in order to understand their structure and physical properties. Models of Uranus and Neptune assume that the unusual magnetic fields of these planets may originate from free hydrogen, which these results could imply is less common than expected. In the future, the researchers want to use mixtures including oxygen, in order for their experiments to better match the chemistry inside the planets.

HZDR is a member of the Helmholtz Association and has five sites (Dresden, Freiberg, Grenoble, Leipzig, Schenefeld near Hamburg) with almost 1,200 members of staff, of whom about 500 are scientists, including 150 Ph.D. candidates.