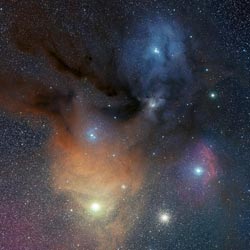 The Rho Ophiuchi star formation region, where hydrogen peroxide has been detected in space.<br>ESO/S. Guisard<br>

On Earth, hydrogen peroxide plays a key role in the chemistry of water and ozone in our planet’s atmosphere, and is familiar for its use as a disinfectant or to bleach hair blonde. Now it has been detected in space by a team of astronomers from Sweden and Germany using the APEX telescope in Chile. APEX is a collaboration between Onsala Space Observatory (OSO), the Max Planck Institute for Radio Astronomy (MPIfR) and ESO.

An international team of astronomers made the discovery with the Atacama Pathfinder Experiment telescope (APEX), situated on the 5000-metre-high Chajnantor plateau in the Chilean Andes. They observed a region in our galaxy close to the star Rho Ophiuchi, about 400 light-years away. The region contains very cold (around -250 degrees Celsius), dense clouds of cosmic gas and dust, in which new stars are being born. The clouds are mostly made of hydrogen, but contain traces of other chemicals, and are prime targets for astronomers hunting for molecules in space. Telescopes such as APEX, which make observations of light at millimetre- and submillimetre-wavelengths, are ideal for detecting the signals from these molecules.

Now, the team has found the characteristic signature of light emitted by hydrogen peroxide, coming from part of the Rho Ophiuchi clouds.

“We were really excited to discover the signatures of hydrogen peroxide with APEX. We knew from laboratory experiments which wavelengths to look for, but the amount of hydrogen peroxide in the cloud is just one molecule for every ten billion hydrogen molecules, so the detection required very careful observations,” says Per Bergman, astronomer at Chalmers and Onsala Space Observatory. Bergman is lead author of the study, which is published in the journal Astronomy & Astrophysics.

Hydrogen peroxide (H2O2) is a key molecule for both astronomers and chemists. Its formation is closely linked to two other familiar molecules, oxygen and water, which are critical for life. Because much of the water on our planet is thought to have originally formed in space, scientists are keen to understand how it is created.

Hydrogen peroxide is thought to form in space on the surfaces of cosmic dust grains — very fine particles similar to sand and soot — when hydrogen (H) is added to oxygen molecules (O2). A further reaction of the hydrogen peroxide with more hydrogen is one way to produce water (H2O). This new detection of hydrogen peroxide will therefore help astronomers better understand the formation of water in the Universe.

“We don’t understand yet how some of the most important molecules here on Earth are made in space. But our discovery of hydrogen peroxide with APEX seems to be showing us that cosmic dust is the missing ingredient in the process,” says Bérengère Parise, head of the Emmy Noether research group on star formation and astrochemistry at the Max-Planck Institute for Radio Astronomy in Germany, and a co-author of the paper.

The new discovery of hydrogen peroxide may also help astronomers understand another interstellar mystery: why oxygen molecules are so hard to find in space. It was only in 2007 that oxygen molecules were first discovered in space, by a team of scientists (among them Chalmers researchers) using the satellite Odin.

To work out just how the origins of these important molecules are intertwined will need more observations of Rho Ophiuchi and other star-forming clouds with future telescopes such as the Atacama Large Millimeter/submillimeter Array (ALMA) — and help from chemists in laboratories on Earth.

APEX is a collaboration between the Max-Planck Institute for Radio Astronomy (MPIfR), the Onsala Space Observatory (OSO) and ESO. The telescope is operated by ESO.

Onsala Space Observatory is Sweden's national facility for radio astronomy. The observatory provides researchers with equipment for the study of the earth and the rest of the universe. It operates two radio telescopes in Onsala, 45 km south of Gothenburg, and participates in several international projects. The observatory is hosted by Department of Earth and Space Sciences at Chalmers University of Technology, and is operated on behalf of the Swedish Research Council. The observations were made using receivers made by Onsala Space Observatory's group for advanced receiver development, based at Chalmers University of Technology.