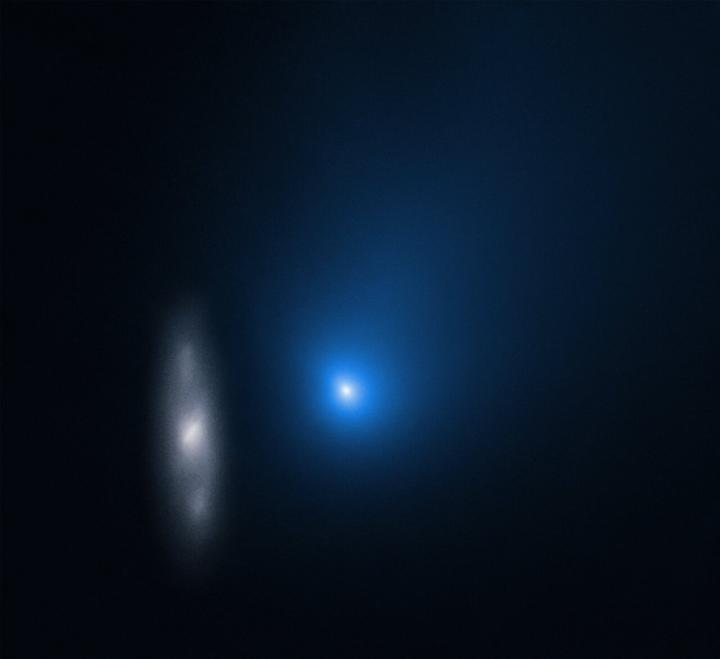 Comet 2I/Borisov is only the second interstellar object known to have passed through our Solar System. In this image taken by the NASA/ESA Hubble Space Telescope, the comet appears in front of a distant background spiral galaxy. Credit: NASA, ESA, and D. Jewitt (UCLA)

In October 2019, Hubble observed the comet at a distance of approximately 420 million kilometres from Earth. These new observations taken in November and December 2019 of the comet at a closer distance provide clearer insights into the details and dimensions of the interstellar visitor [1].

The first image shows the comet in front of a distant background spiral galaxy (2MASX J10500165-0152029). The galaxy's bright central core is smeared in the image because Hubble was tracking the comet. Borisov was approximately 326 million kilometres from Earth in this exposure. Its tail of ejected dust streaks off to the upper right.

The second image is Hubble's revisit observation of the comet near its closest approach to the Sun. There it was subjected to a greater degree of heating than it had ever experienced, after spending most of its life in the extreme cold of interstellar space. The comet is 298 million kilometres from Earth in this photo, near the inner edge of the asteroid belt.

The nucleus, an agglomeration of ices and dust, is still too small to be resolved. The bright central portion is a coma made up of dust leaving the surface. The comet will make its closest approach to Earth in late December, when it will be at a distance of 290 million kilometres.

“Hubble gives us the best measure of the size of comet Borisov's nucleus, which is the really important part of the comet,” said David Jewitt, a professor of planetary science and astronomy at the University of California Los Angeles, whose team has captured the best and sharpest images of this first interstellar comet.

“Surprisingly, our Hubble images show that its nucleus is more than 15 times smaller than earlier investigations suggested it might be. The radius is smaller than half a kilometre. This is important because knowing the size helps us to determine the total number, and mass, of such objects in the Solar System, and in the Milky Way. Borisov is the first known interstellar comet, and we would like to know how many others there are.”

Crimean amateur astronomer Gennady Borisov discovered the comet on 30 August 2019. After a week of observations by amateur and professional astronomers all over the world, the International Astronomical Union's Minor Planet Center computed an orbit for the comet which showed that it came from interstellar space.

Until now, all catalogued comets have come either from a ring of icy debris at the periphery of our Solar System, called the Kuiper belt, or from the Oort cloud, a shell of icy objects which is thought to be in the outermost regions of our Solar System, with its innermost edge at about 2000 times the distance between the Earth and the Sun.

2I/Borisov may represent only the beginning of a series of discoveries of interstellar objects paying a brief visit to our Solar System. There may be thousands of such interstellar objects here at any given time; most, however, are too faint to be detected with present-day telescopes.

Observations by Hubble and other telescopes have shown that rings and shells of icy debris encircle young stars where planet formation is underway. A gravitational interaction between these comet-like objects and other massive bodies could cause them to hurtle deep into space where they go adrift among the stars.