Home / Physics and Astronomy / Hubble surveys a snowman sculpted from gas and dust
11.11.2021

Hubble surveys a snowman sculpted from gas and dust 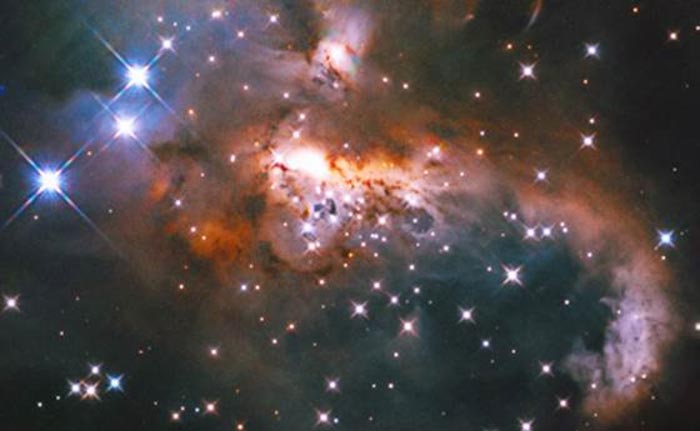 The Snowman Nebula is an emission nebula that resides in the constellation Puppis in the southern sky, about 6,000 light-years away from Earth.

Emission nebulae are diffuse clouds of gas that have become so charged by the energy of nearby massive stars that they glow with their own light. The radiation from these massive stars strips electrons from the nebula’s hydrogen atoms in a process called ionization.

As the energized electrons revert from their higher-energy state to a lower-energy state, they emit energy in the form of light, causing the nebula’s gas to glow.

From a telescope on Earth, the Snowman looks a bit like a dual-lobed ball of gas, but this Hubble Space Telescope image captures the details of sweeping curves of bright gas and dark knots of dust in a small section of the nebula.

The Snowman is also known as Sharpless 2-302, one of the objects in a catalog of mostly emission nebulae that was compiled by astronomer Stewart Sharpless as he sought to identify areas of interstellar ionized hydrogen, or HII regions.

This image was captured as part of a survey of massive- and intermediate-size “protostars,” or newly forming stars. Astronomers used the infrared sensitivity of Hubble’s Wide Field Camera 3 to look for hydrogen ionized by ultraviolet light from the protostars, jets from the stars, and other features.