Hubble sees `Oumuamua getting a boost 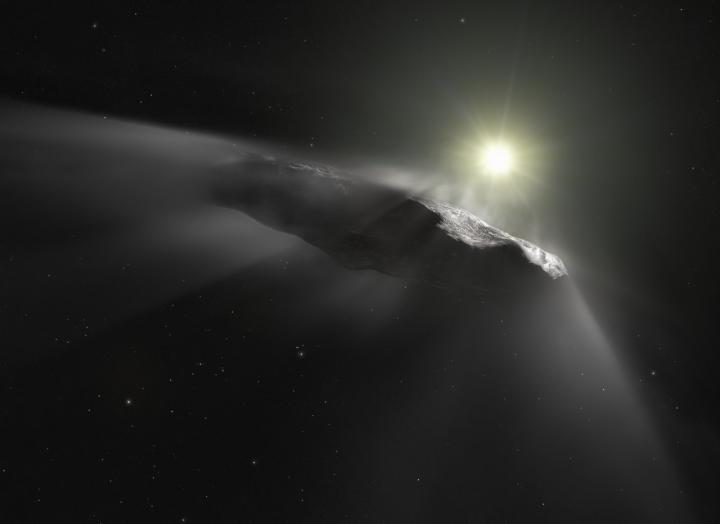 This artist's impression shows the first interstellar object discovered in the Solar System, `Oumuamua. Observations made with the NASA/ESA Hubble Space Telescope and others show that the object is moving faster than predicted while leaving the Solar System. Credit: ESA/Hubble, NASA, ESO, M. Kornmesser

`Oumuamua, the first interstellar object discovered in the Solar System, is moving away from the Sun faster than expected. This anomalous behaviour was detected using the NASA/ESA Hubble Space Telescope in cooperation with ground-based telescopes. The new results suggest that `Oumuamua is most likely a comet and not an asteroid. The discovery appears in the journal Nature.

`Oumuamua — the first interstellar object discovered within our Solar System — has been the subject of intense scrutiny since its discovery in October 2017 [1]. Now, by combining data from the NASA/ESA Hubble Space Telescope, the Canada-France-Hawaii Telescope , ESO's Very Large Telescope and the Gemini South Telescope, an international team of astronomers has found that the object is moving faster than predicted. The measured gain in speed is tiny and `Oumuamua is still slowing down because of the pull of the Sun — just not as fast as predicted by celestial mechanics.

The team, led by Marco Micheli (European Space Agency) explored several scenarios to explain the faster-than-predicted speed of this peculiar interstellar visitor. The most likely explanation is that `Oumuamua is venting material from its surface due to solar heating — a behaviour known as outgassing [2]. The thrust from this ejected material is thought to provide the small but steady push that is sending `Oumuamua hurtling out of the Solar System faster than expected — as of 1 June, it is travelling with about 114 000 kilometres per hour.

Such outgassing is a typical behaviour for comets and contradicts the previous classification of `Oumuamua as an interstellar asteroid. “We think this is a tiny, weird comet,” comments Marco Micheli. “We can see in the data that its boost is getting smaller the farther away it travels from the Sun, which is typical for comets.”

Usually, when comets are warmed by the Sun they eject dust and gas, which form a cloud of material — called a coma — around them, as well as the characteristic tail . However, the research team could not detect any visual evidence of outgassing.

“We did not see any dust, coma, or tail, which is unusual,” explains co-author Karen Meech (University of Hawaii, USA) who led the discovery team's characterisation of `Oumuamua in 2017. “We think that 'Oumuamua may vent unusually large, coarse dust grains.”

The team speculated that perhaps the small dust grains adorning the surface of most comets eroded during `Oumuamua's journey through interstellar space, with only larger dust grains remaining. A cloud of these larger particles would not be bright enough to be detected by Hubble.

Not only is `Oumuamua's hypothesised outgassing an unsolved mystery, but also its interstellar origin. The team originally performed the new observations on `Oumuamua to exactly determine its path which would have probably allowed it to trace the object back to its parent star system. The new results means it will be more challenging to obtain this information.

“The true nature of this enigmatic interstellar nomad may remain a mystery,” concludes team member Olivier Hainaut (European Southern Observatory, Germany). “`Oumuamua's recently-detected gain in speed makes it more difficult to be able to trace the path it took from its extrasolar home star.”

[1]`Oumuamua, pronounced “oh-MOO-ah-MOO-ah”, was first discovered using the Pan-STARRS telescope at the Haleakala Observatory, Hawaii. Its name means “a messenger from afar, arriving first” in Hawaiian, and reflects its nature as the first known object of interstellar origin to have entered the Solar System.

[2] The team tested several hypotheses to explain the unexpected change in speed. They analysed whether solar radiation pressure , the Yarkovsky effect, or friction-like effects could explain the observations. It was also checked whether the gain in speed could have been caused by an impulse event (such as a collision), by `Oumuamua being a binary object or by `Oumuamua being a magnetised object. Also, the unlikely theory that `Oumuamua is an interstellar spaceship was rejected: the smooth and continuous change in speed is not typical for thrusters and the object is tumbling on all three axes, speaking against it being an artificial object.

The research team's work is presented in the scientific paper “Non-gravitational acceleration in the trajectory of 1I/2017 U1 (`Oumuamua)”, which will be published in the journal Nature on 27 June 2018.