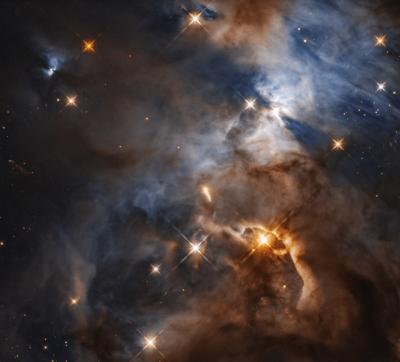 This image, taken with the NASA/ESA Hubble Space Telescope shows the Serpens Nebula, a stellar nursery about 1300 light-years away. Within the nebula, in the upper right of the image, a shadow is created by the protoplanetary disc surrounding the star HBC 672. While the disc of debris is too tiny to be seen even by Hubble, its shadow is projected upon the cloud in which it was born. In this view, the feature -- nicknamed the Bat Shadow -- spans approximately 200 times the diameter of our own Solar System. Credit: NASA, ESA, and STScI

The Serpens Nebula, located in the tail of the Serpent (Serpens Cauda) about 1300 light-years away, is a reflection nebula that owes most of its sheen to the light emitted by stars like HBC 672 — ?a young star nestled in its dusty folds. In this image the NASA/ESA Hubble Space Telescope has exposed two vast cone-like shadows emanating from HBC 672.

These colossal shadows on the Serpens Nebula are cast by the protoplanetary disc surrounding HBC 672. By clinging tightly to the star the disc creates an imposing shadow, much larger than the disc — approximately 200 times the diameter of our own Solar System.

The disc's shadow is similar to that produced by a cylindrical lamp shade. Light escapes from the top and bottom of the shade, but along its circumference, dark cones of shadow form.

The disc itself is so small and far away from Earth that not even Hubble can detect it encircling its host star. However, the shadow feature — nicknamed the Bat Shadow — reveals details of the disc's shape and nature. The presence of a shadow implies that the disc is being viewed nearly edge-on.

Whilst most of the shadow is completely opaque, scientists can look for colour differences along its edges, where some light gets through. Using the shape and colour of the shadow, they can determine the size and composition of dust grains in the disc.

The whole Serpens Nebula, of which this image shows only a tiny part, could host more of these shadow projections. The nebula envelops hundreds of young stars, many of which could also be in the process of forming planets in a protoplanetary disc.

Although shadow-casting discs are common around young stars, the combination of an edge-on viewing angle and the surrounding nebula is rare. However, in an unlikely coincidence, a similar looking shadow phenomenon can be seen emanating from another young star, in the upper left of the image.

These precious insights into protoplanetary discs around young stars allow astronomers to study our own past. The planetary system we live in once emerged from a similar protoplanetary disc when the Sun was only a few million years old. By studying these distant discs we get to uncover the formation and evolution of our own cosmic home.