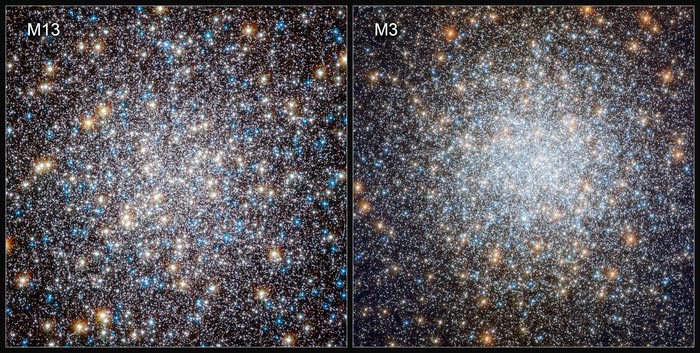 To investigate the physics underpinning white dwarf evolution, astronomers compared cooling white dwarfs in two massive collections of stars: the globular clusters M3 and M13. These two clusters share many physical properties such as age and metallicity but the populations of stars which will eventually give rise to white dwarfs are different. This makes M3 and M13 together a perfect natural laboratory in which to test how different populations of white dwarfs cool.
Credit: ESA/Hubble & NASA, G. Piotto et al.

The prevalent view of white dwarfs as inert, slowly cooling stars has been challenged by observations from the NASA/ESA Hubble Space Telescope. An international group of astronomers have discovered the first evidence that white dwarfs can slow down their rate of ageing by burning hydrogen on their surface.

“We have found the first observational evidence that white dwarfs can still undergo stable thermonuclear activity,” explained Jianxing Chen of the Alma Mater Studiorum Università di Bologna and the Italian National Institute for Astrophysics, who led this research. “This was quite a surprise, as it is at odds with what is commonly believed.”

White dwarfs are the slowly cooling stars which have cast off their outer layers during the last stages of their lives. They are common objects in the cosmos; roughly 98% of all the stars in the Universe will ultimately end up as white dwarfs, including our own Sun [1]. Studying these cooling stages helps astronomers understand not only white dwarfs, but also their earlier stages as well.

To investigate the physics underpinning white dwarf evolution, astronomers compared cooling white dwarfs in two massive collections of stars: the globular clusters M3 and M13 [2]. These two clusters share many physical properties such as age and metallicity [3] but the populations of stars which will eventually give rise to white dwarfs are different. In particular, the overall colour of stars at an evolutionary stage known as the Horizontal Branch are bluer in M13, indicating a population of hotter stars. This makes M3 and M13 together a perfect natural laboratory in which to test how different populations of white dwarfs cool.

“The superb quality of our Hubble observations provided us with a full view of the stellar populations of the two globular clusters,” continued Chen. “This allowed us to really contrast how stars evolve in M3 and M13.”

Comparing their results with computer simulations of stellar evolution in M13, the researchers were able to show that roughly 70% of the white dwarfs in M13 are burning hydrogen on their surfaces, slowing down the rate at which they are cooling.

This discovery could have consequences for how astronomers measure the ages of stars in the Milky Way. The evolution of white dwarfs has previously been modelled as a predictable cooling process. This relatively straightforward relationship between age and temperature has led astronomers to use the white dwarf cooling rate as a natural clock to determine the ages of star clusters, particularly globular and open clusters. However, white dwarfs burning hydrogen could cause these age estimates to be inaccurate by as much as 1 billion years.

“Our discovery challenges the definition of white dwarfs as we consider a new perspective on the way in which stars get old,” added Francesco Ferraro of the Alma Mater Studiorum Università di Bologna and the Italian National Institute for Astrophysics, who coordinated the study. “We are now investigating other clusters similar to M13 to further constrain the conditions which drive stars to maintain the thin hydrogen envelope which allows them to age slowly”.

[1] The Sun is only 4.6 billion years through its roughly 10-billion-year lifetime. Once it exhausts hydrogen in its core, the Sun will swell into a red giant, engulfing the inner planets and searing the Earth’s surface. It will then throw off its outer layers, and the exposed core of the Sun will be left as a slowly cooling white dwarf. This stellar ember will be incredibly dense, packing a large fraction of the mass of the Sun into a roughly Earth-sized sphere.

[2] M3 contains roughly half a million stars and lies in the constellation Canes Venatici. M13 — occasionally known as the Great Globular Cluster in Hercules — contains slightly fewer stars, only several hundred thousand. White dwarfs are often used to estimate the ages of globular clusters, and so a significant amount of Hubble time has been dedicated to exploring white dwarfs in old and densely populated globular clusters. Hubble directly observed white dwarfs in globular star clusters for the first time in 2006.

[3] Astronomers use the word “metallicity” to describe the proportion of a star which is composed of elements other than hydrogen and helium. The vast majority of matter in the Universe is either hydrogen or helium — to take the Sun as an example, 74.9% of its mass is hydrogen, 23.8% is helium, and the remaining 1.3% is a mixture of all the other elements, which astronomers refer to as “metals”.