How to have a blast like a black hole 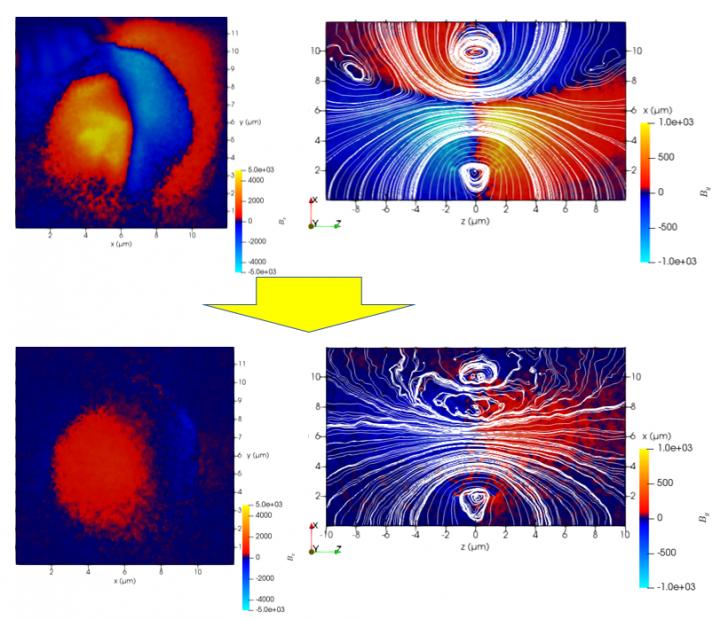 Scientists at Osaka University use extremely intense laser pulses to create magnetized-plasma conditions comparable to those surrounding a black hole, study that may help explain the still mysterious X-rays that can be emitted from some celestial bodies.

Laser Engineering at Osaka University have successfully used short, but extremely powerful laser blasts to generate magnetic field reconnection inside a plasma. This work may lead to a more complete theory of X-ray emission from astronomical objects like black holes.

In addition to being subjected to extreme gravitational forces, matter being devoured by a black hole can be also be pummeled by intense heat and magnetic fields. Plasmas, a fourth state of matter hotter than solids, liquids, or gasses, are made of electrically charged protons and electrons that have too much energy to form neutral atoms. Instead, they bounce frantically in response to magnetic fields.

Within a plasma, magnetic reconnection is a process in which twisted magnetic field lines suddenly “snap” and cancel each other, resulting in the rapid conversion of magnetic energy into particle kinetic energy. In stars, including our sun, reconnection is responsible for much of the coronal activity, such as solar flares. Owing to the strong acceleration, the charged particles in the black hole’s accretion disk emit their own light, usually in the X-ray region of the spectrum.

To better understand the process that gives rise to the observed X-rays coming from black holes, scientists at Osaka University used intense laser pulses to create similarly extreme conditions on the lab. “We were able to study the high-energy acceleration of electrons and protons as the result of relativistic magnetic reconnection,” Senior author Shinsuke Fujioka says. “For example, the origin of emission from the famous black hole Cygnus X-1, can be better understood.”

This level of light intensity is not easily obtained, however. For a brief instant, the laser required two petawatts of power, equivalent to one thousand times the electric consumption of the entire globe. With the LFEX laser, the team was able to achieve peak magnetic fields with a mind-boggling 2,000 telsas. For comparison, the magnetic fields generated by an MRI machine to produce diagnostic images are typically around 3 teslas, and Earth’s magnetic field is a paltry 0.00005 teslas. The particles of the plasma become accelerated to such an extreme degree that relativistic effects needed to be considered.

“Previously, relativistic magnetic reconnection could only be studied via numerical simulation on a supercomputer. Now, it is an experimental reality in a laboratory with powerful lasers,” first author King Fai Farley Law says. The researchers believe that this project will help elucidate the astrophysical processes that can happen at places in the Universe that contain extreme magnetic fields.