Home / Physics and Astronomy / How heavy elements come about in the universe
18.03.2019

How heavy elements come about in the universe 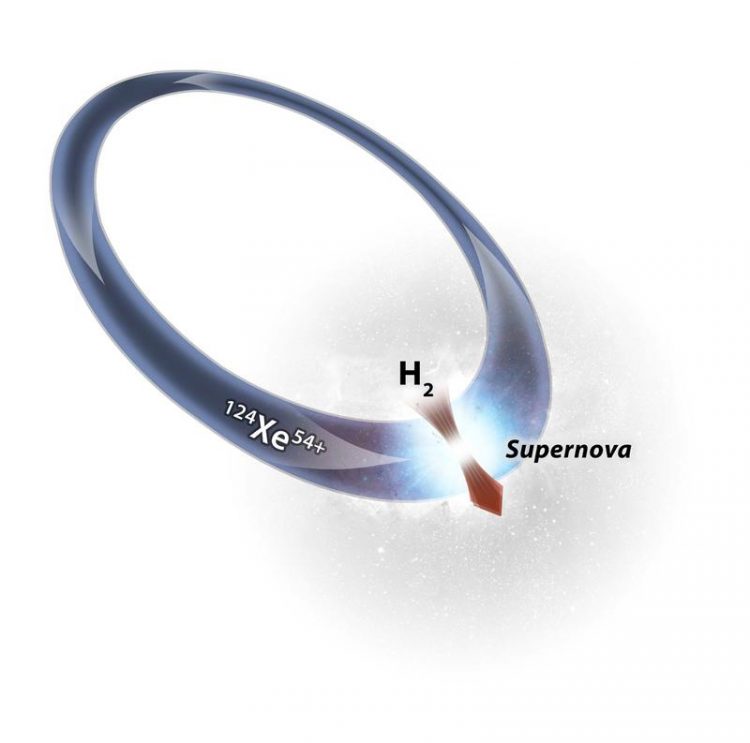 For the first time, the fusion of hydrogen and xenon was able to be investigated at the same temperatures as occur in stellar explosions using an ion storage ring. Mario Weigand, Goethe-Universität

Heavy elements are produced during stellar explosion or on the surfaces of neutron stars through the capture of hydrogen nuclei (protons).

This occurs at extremely high temperatures, but at relatively low energies. An international research team headed by Goethe University has now succeeded in investigating the capture of protons at the storage ring of the GSI Helmholtzzentrum für Schwerionenforschung.

As the scientists report in the current issue of Physical Review Letters, their goal was to determine more precisely the probability for a proton capture in astrophysical scenarios. As Dr. Jan Glorius from the GSI atomic physics research department explains, they were faced with two challenges in this endeavour:

“The reactions are most probable under astrophysical circumstances in an energy range called the Gamow window. In this range, nuclei tend to be somewhat slow, making them difficult to obtain in the required intensity. In addition, the cross section – the probability of proton capture – decreases rapidly with energy. Until now, it has been almost impossible to create the right conditions in a laboratory for these kinds of reactions.”

René Reifarth, Professor for experimental astrophysics at Goethe University suggested a solution as early as ten years ago: The low energies within the Gamow window range can be reached more precisely when the heavy reaction partner circulates in an accelerator in which it interact with an stationary proton gas.

He achieved first successes in September 2015 with a group of Heimholtz early career researchers. Since then, his team has gained excellent support from Professor Yuri Litvinov, who leads the EU-funded research project ASTRUm at GSI.

In the experiment, the international team first produced xenon ions. They were decelerated in the experimental storage ring ESR and caused to interact with protons. This resulted in reactions in which the xenon nuclei captured a proton and were transformed into heavier caesium – a process like that which occurs in astrophysical scenarios.

“The experiment makes a decisive contribution to advancing our understanding of nucleosynthesis in the cosmos,” says René Reifarth. “Thanks to the high-performance accelerator facility at GSI, we were able to improve the experimental technique for decelerating the heavy reaction partner. We now have more exact knowledge of the area in which the reaction rates occur, which until now had only been theoretically predicted. This allows us to more precisely model the production of elements in the universe.”

The experiment took place as part of the research collaboration SPARC (Stored Particles Atomic Physics Research Collaboration), which is part of the FAIR research programme. Equipment funded by the Verbundforschung (collaborative research) of the Federal Ministry for Education and Research was used in this experiment.

A picture can be downloaded here: http://www.uni-frankfurt.de/76756294
Caption: For the first time, the fusion of hydrogen and xenon was able to be investigated at the same temperatures as occur in stellar explosions using an ion storage ring.
Credit: Mario Weigand, Goethe-Universität

Current news about science, teaching, and society can be found on GOETHE-UNI online (www.aktuelles.uni-frankfurt.de)
Goethe University is a research-oriented university in the European financial centre Frankfurt am Main. The university was founded in 1914 through private funding, primarily from Jewish sponsors, and has since produced pioneering achievements in the areas of social sciences, sociology and economics, medicine, quantum physics, brain research, and labour law. It gained a unique level of autonomy on 1 January 2008 by returning to its historic roots as a “foundation university”. Today, it is one of the three largest universities in Germany. Together with the Technical University of Darmstadt and the University of Mainz, it is a partner in the inter-state strategic Rhine-Main University Alliance. Internet: www.uni-frankfurt.de