Home / Physics and Astronomy / How are hadrons born at the huge energies available in the LHC?
01.03.2018

How are hadrons born at the huge energies available in the LHC? 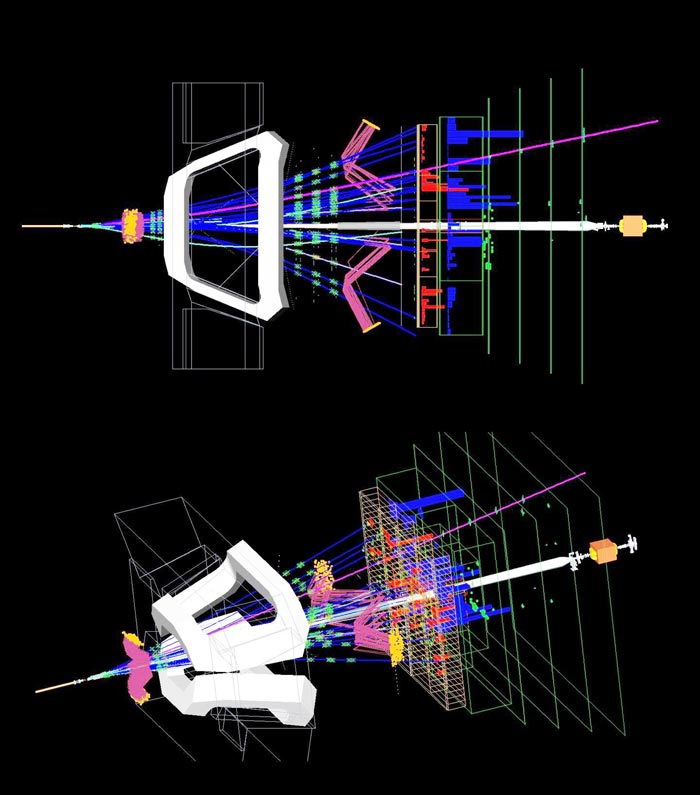 These are particles produced during one of the collisions of two protons, each with energies of 7 TeV, registered by the detectors of the LHCb experiment in 2011; view from two different sides. Credit: CERN, LHCb

When protons accelerated to the greatest energy collide with each other in the LHC, their component particles – quarks and gluons – create a puzzling intermediate state. The observation that in the collisions of such relatively simple particles as protons this intermediate state exhibits the properties of a liquid, typical for collisions of much more complex structures (heavy ions), was a big surprise.

Properties of this type indicate the existence of a new state of matter: a quark-gluon plasma in which quarks and gluons behave almost as free particles. This exotic liquid cools instantly. As a result, the quarks and gluons re-connect with each other in a process called hadronisation. The effect of this is the birth of hadrons, particles that are clumps of two or three quarks.

Thanks to the latest analysis of data collected at energies of seven teraelectronvolts, researchers from the Institute of Nuclear Physics Polish Academy of Sciences (IFJ PAN) in Cracow, working within the LHCb Collaboration, acquired new information on the mechanism of hadronisation in proton-proton collisions.

“The main role in proton collisions is played by strong interaction, described by the quantum chromodynamics. The phenomena occurring during the cooling of the quark-gluon plasma are, however, so complex in terms of computation that until now it has not been possible fully understand the details of hadronisation. And yet it is a process of key significance! It is thanks to this that in the first moments after the Big Bang, the dominant majority of particles forming our everyday environment was formed from quarks and gluons,” says Assoc. Prof. Marcin Kucharczyk (IFJ PAN).

In the LHC, hadronisation is extremely fast, and occurs in an extremely small area around the point of proton collision: its dimensions reach only femtometres, or millionths of one billionth of a metre. It is no wonder then, that direct observation of this process is currently not possible. To obtain any information about its course, physicists must reach for various indirect methods. A key role is played by the basic tool of quantum mechanics: a wave function whose properties are mapped by the characteristics of particles of a given type (it is worth noting that although it is almost 100 years since the birth of quantum mechanics, there still exists various interpretations of the wave function!).

“The wave functions of identical particles will effectively overlap, i.e. interfere. If they are enhanced as a result of interference, we are talking about Bose-Einstein correlations, if they are suppressed – Fermi-Dirac correlations. In our analyses, we were interested in the enhancements, that is, the Bose-Einstein correlations. We were looking for them between the pi mesons flying out of the area of hadronisation in directions close to the original direction of the colliding beams of protons,” explains Ph.D. student Bartosz Malecki (IFJ PAN).

The method used was originally developed for radioastronomy and is called HBT interferometry (from the names of its two creators: Robert Hanbury Brown and Richard Twiss). When used with reference to particles, HBT interferometry makes it possible to determine the size of the area of hadronisation and its evolution over time. It helps to provide information about, for example, whether this area is different for different numbers of emitted particles or for their different types.

The data from the LHCb detector made it possible to study the hadronisation process in the area of so-called small angles, i.e. for hadrons produced in directions close to the direction of the initial proton beams. The analysis performed by the group from the IFJ PAN provided indications that the parameters describing the source of hadronisation in this unique region covered by LHCb experiment at LHC are different from the results obtained for larger angles.

“The analysis that provided these interesting results will be continued in the LHCb experiment for various collision energies and different types of colliding structures. Thanks to this, it will be possible to verify some of the models describing hadronisation and, consequently, to better understand the course of the process itself,” sums up Prof. Mariusz Witek (IFJ PAN).

The work of the team from the IFJ PAN was financed in part by the OPUS grant from the Polish National Science Centre.

The average yearly yield of the IFJ PAN encompasses more than 600 scientific papers in the Journal Citation Reports published by the Thomson Reuters. The part of the Institute is the Cyclotron Centre Bronowice (CCB) which is an infrastructure, unique in Central Europe, to serve as a clinical and research centre in the area of medical and nuclear physics. IFJ PAN is a member of the Marian Smoluchowski Krakow Research Consortium: “Matter-Energy-Future” which possesses the status of a Leading National Research Centre (KNOW) in physics for the years 2012-2017. The Institute is of A+ Category (leading level in Poland) in the field of sciences and engineering.

Particles produced during one of the collisions of two protons, each with energies of 7 TeV, registered by the detectors of the LHCb experiment in 2011; view from two different sides. (Source: CERN, LHCb)