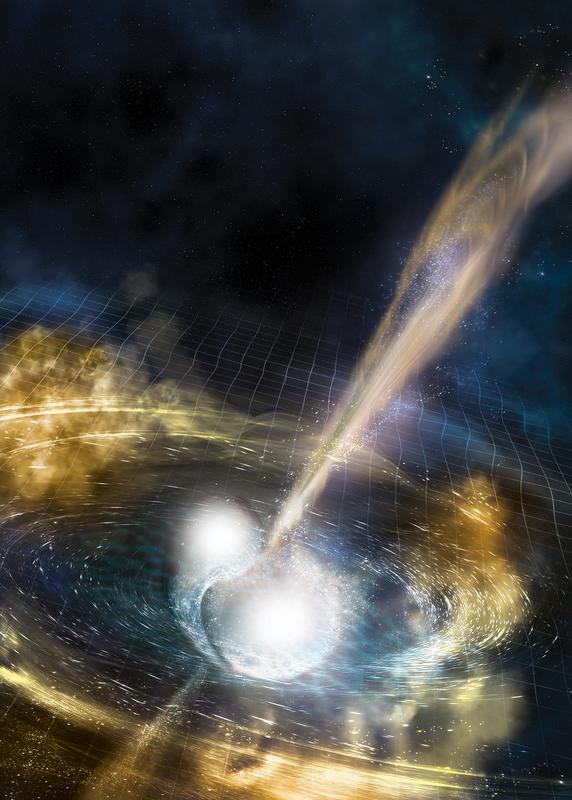 When two neutron stars collide, the matter at their core enters extreme states. An international research team has now studied the properties of matter compressed in such collisions.

The HADES long-term experiment, involving more than 110 scientists, has been investigating forms of cosmic matter since 1994.

With the investigation of electromagnetic radiation arising when stars collide, the team has now focused attention on the hot, dense interaction zone between two merging neutron stars.

Collisions between stars cannot be directly observed – not least of all because of their extreme rarity. According to estimates, none has ever happened in our galaxy, the Milky Way. The densities and temperatures in merging processes of neutron stars are similar to those occurring in heavy ion collisions, however.

This enabled the HADES team to simulate the conditions in merging stars at the microscopic level in the heavy ion accelerator at the Helmholtzzentrum für Schwerionenforschung (GSI) in Darmstadt.

As in a neutron star collision, when two heavy ions are slammed together at close to the speed of light, electromagnetic radiation is produced. It takes the form of virtual photons that turn back into real particles after a very short time. However, the virtual photons occur very rarely in experiments using heavy ions.

“We had to record and analyze about 3 billion collisions to finally reconstruct 20,000 measurable virtual photons,” says Dr. Jürgen Friese, the former spokesman of the HADES collaboration and researcher at Laura Fabbietti’s Professorship on Dense and Strange Hadronic Matter at TUM.

To detect the rare and transient virtual photons, researchers at TUM developed a special 1.5 square meter digital camera. This instrument records the Cherenkov effect: the name given to certain light patterns generated by decay products of the virtual photons.

“Unfortunately the light emitted by the virtual photons is extremely weak. So the trick in our experiment was to find the light patterns,” says Friese.

“They could never be seen with the naked eye. We therefore developed a pattern recognition technique in which a 30,000 pixel photo is rastered in a few microseconds using electronic masks. That method is complemented with neural networks and artificial intelligence.”

Observing the material properties in the laboratory

The reconstruction of thermal radiation from compressed matter is a milestone in the understanding of cosmic forms of matter. It enabled the scientists to place the temperature of the new system resulting from the merger of stars at 800 billion degrees celsius. As a result, the HADES team was able to show that the merging processes under consideration are in fact the cosmic kitchens for the fusion of heavy nucleii.

The HADES project is making it possible to collect data on strange particles believed to exist only in the core of neutron stars. With their study of strangeness in particles, Prof. Fabbietti's team is helping to lay the foundation for realistic models of neutron stars.

https://www.tum.de/nc/en/about-tum/news/press-releases/details/35655/ Link to the press release