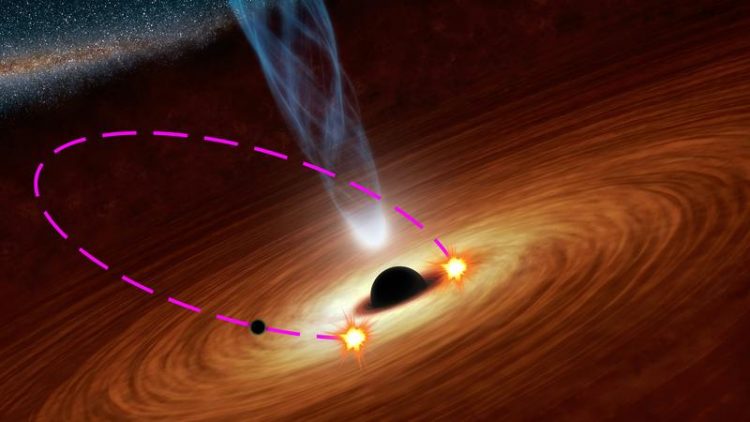 Illustration of the centre of OJ 287. Two supermassive black holes are revolving around each other on relativistic orbits with an orbital period of 12 years. NASA/JPL-Caltech

It took more than 100 years until the existence of gravitational waves predicted by Albert Einstein in 1915 as part of his general theory of relativity was finally proven in an experiment.

Now, astrophysicists want to write a new chapter and detect gravitational waves in the nanohertz range, which e.g. supermassive black holes orbiting one another create, long before they collide.

An international team of almost 30 research institutions from all over the world has now indirectly detected such a system of supermassive black holes. The scientists have proven that the quasar OJ 287–located approximately four billion light years away in the Cancer constellation–is a binary system of two supermassive black holes whose interaction is believed to lead to the emission of nanohertz gravitational waves.

In the current issue of the “Astrophysical Journal Letters”, they present their observational data recorded last year. “The measurements of the Spitzer Space Telescope were assisted by ground based observations”, says Dr Markus Mugrauer from the Astrophysical Institute and University Observatory of the Friedrich Schiller University Jena. Both the astrophysicist and Jena physics student Felix Hildebrandt co-authored the current study. They spent many clear nights observing OJ 287 from the University Observatory, located in Großschwabhausen.

The researchers argue that their observations very precisely confirm predictions made based on the general theory of relativity. “We already knew that OJ 287 is a quasar, a quasi-stellar object. It looks like a star through a telescope, but in fact it is the extremely luminous centre of a galaxy far away,” explains Mugrauer.

What is striking about OJ 287 is the temporal variability of its luminosity: twice in twelve years, the brightness of OJ 287 increases significantly within only two days compared to the rest of the time. Astronomers had attributed this strange behaviour to the theory that there is not only one black hole in the centre of OJ 287, but two supermassive black holes that revolve around each other in an orbital period of twelve years.

This was only a theory—until a recent observation has provided evidence. Calculations predicted another optical outburst of OJ 287 for the morning of 31 July 2019. “On its orbit, the secondary black hole punches through a gaseous accretion disk that surrounds the primary black hole,” explains Mugrauer. Every time this happens, extremely hot gas is released in a big explosion—the outburst that can be observed from the Earth.

The outburst calculated to happen in 2019 was predicted to be similar to the one observed in 2007, because the secondary black hole passed through the disk surrounding the primary black hole in almost the same point and direction than 12 years before. And the astrophysicists were able to show exactly that: The telescope registered the expected signal of the outburst in OJ 287's light curve, with a deviation of less than four hours from the predicted time.

With the help of these observations that are published now, the team of researchers was moreover able to verify a fundamental theorem of black hole physics called “no-hair” theorem. The theorem states that black holes are plain bodies—jokingly “without hair”—, which rules out any unevenness in their event horizons.

One way to prove this theorem is to examine a satellite’s movement around a black hole with great precision: If a black hole had edges–”hair”–, then the orbit of the satellite should change in a measurable way. The data recorded now and earlier observations of OJ 287’s outbursts allowed to determine the orbit of the secondary black hole very precisely, which validates the “no hair” theorem.

“The research results we present in our study show the importance of university observatories,” Mugrauer summarizes. “Not only do they provide important calibration data for space observation, but they also enable us to continuously observe celestial objects over a very long period of time.” In addition, these observatories allow physics students to directly collaborate in international astrophysical research projects.