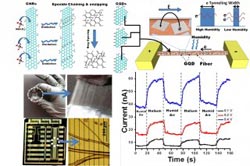 Vikas Berry, William H. Honstead professor of chemical engineering, and his research team are using graphene quantum dots to improve sensing devices in a twofold project. The first part involves producing the graphene quantum dots, which are ultrasmall pieces of graphene. Graphene is a single-atom thick sheet of carbon atoms and has superior electrical, mechanical and optical properties. The second part of the project involves incorporating these quantum dots into electron-tunneling based sensing devices.

The scientists assembled the quantum dots into a network on a hydroscopic microfiber that was attached to electrodes on its two sides. They placed the assembled quantum dots less than a nanometer apart so they were not completely connected. The assembling of dots is similar to a corn on the cob structure — the corn kernels are nanoscale quantum dots and the cob is the microfiber.

Several researchers — including four 2012 alumni in chemical engineering: Augustus Graham, Alfredo A. Rodriguez, Jonathan Colston and Evgeniy Shishkin — applied a potential across the fiber and controlled the distance between the quantum dots by adjusting the local humidity, which changes the current flowing through the dots.

“If you reduce the humidity around this device, the water held by this fiber is lost,” Berry said. “As a result, the fiber shrinks and the graphenic components residing atop come close to one another in nanometer scale. This increases the electron transport from one dot to the next. Just by reading the currents one can tell the humidity in the environment.”

Decreasing the distance between the graphene quantum dots by 0.35 nanometers increased the device's conductivity by 43-fold, Berry said. Furthermore, because air contains water, reducing air pressure decreased its water content and caused the graphene quantum dots to get closer together, which increased conductivity. Quantum mechanics suggests that electrons have a finite probability to tunnel from an electrode to a nonconnected electrode, Berry said. This probability is inversely and exponentially proportional to the tunneling distance, or the gap between the electrodes.

The research has numerous applications, particularly in improving sensors for humidity, pressure or temperature.

“These devices are unique because, unlike most humidity sensors, these are more responsive in vacuum,” Berry said. “For example, these devices can be incorporated into space shuttles, where low humidity measurements are required. These sensors might also be able to detect trace amounts of water on Mars, which has 1/100th of the earth's atmospheric pressure. This is because the device measures humidity at a much higher resolution in vacuum.”

“If you replace this polymer with a polymer that is responsive to other stimuli, you can make a different kind of sensor,” Berry said. “I envision this project to have a broad impact on sensing.”

Molecular machines
Berry's research team also is studying molecular machines interfaced with graphene. In this work, the researchers are able to mechanically actuate the molecules, which undergo a change in the electric field around them and influence the carrier density of the interfaced graphene. This work will appear in an upcoming issue of the journal Small in an article titled “Covalent functionalization of dipole-modulating molecules on trilayer graphene: an avenue for graphene-interfaced molecular machines.”

The researchers have found that graphene responds sensitively to molecular motion. Phong Nguyen, a doctoral student in chemical engineering and lead author of the work, tethered actuating molecules on graphene and measured the device's response.

“The next phase of science beyond nanotechnology will be molecular technology,” Berry said. “We are working on developing routes to incorporate molecular machines into devices.”