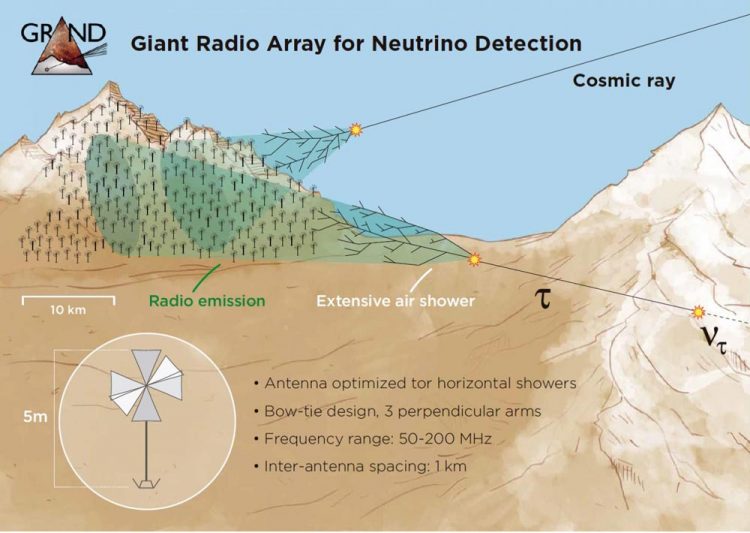 This is the GRAND detection principle Credit: ©Science China Press

A decades-old mystery: where are the most energetic particles coming from?

A major open question in astrophysics for the past fifty years has been the origin of the most energetic particles known to us, the ultra-high-energy cosmic rays (UHECRs). These are electrically charged particles – protons and atomic nuclei – of extraterrestrial origin. Their energies are millions of times higher than those of the Large Hadron Collider.

The most energetic UHECRs have energies of 1019 eV or more . This is about the kinetic energy of a football (soccer ball) kicked by a professional player, concentrated in the size of an atomic nucleus. UHECRs are likely made in powerful cosmic accelerators – like active supermassive black holes and supernovae – located outside the Milky Way, at distances of a few Gigaparsecs (109 parsec ~ 1013 km), in the far reaches of the observable Universe. However, despite our efforts, no individual source of cosmic rays has been identified so far.

The reason is two-fold. First, because cosmic rays are electrically charged, they are bent by the magnetic fields that exist in the intergalactic space and inside the Milky Way. As a result, the direction with which they arrive at Earth does not point back to their origin. Second, during their trip to Earth, UHECRs randomly interact with cosmic photon fields that permeate the Universe – notably, with the cosmic microwave background. In the interactions, UHECRs are either completely destroyed – and so never arrive at Earth – or lose a significant amount of energy – which further aggravates their magnetic bending.

Fortunately, the same interactions also produce secondary ultra-high-energy neutrinos as a by-product. Those we can use as a proxy to finding the sources and properties of UHECRs.

Neutrinos are elementary particles with unique properties: they are light, electrically neutral, and hardly interact with matter or photons. This makes it difficult to detect them. But it also means that, unlike cosmic rays, ultra-high-energy neutrinos are not bent by magnetic fields, nor are they destroyed or lose energy in interactions with cosmic photons. Because the Universe is not opaque to them, they are able to reach Earth even at the highest energies, and from the most distant locations.

Neutrinos inherit about 5% of the energy of their parent UHECRs. Therefore, neutrinos of energies around 1019 eV (10 EeV, with 1 EeV = 1018 eV) are created from UHECRs of energies 20 times higher, which do not reach Earth, unless they are produced nearby Therefore, by studying EeV neutrinos, we indirectly study 200-EeV cosmic rays, at the very end of the observed cosmic-ray energy spectrum. Because these cosmic rays are unlikely to reach Earth, neutrinos provide the only viable way to study them and their sources.

Ultra-high-energy neutrinos produced in the interactions of UHECRs with the cosmic microwave background en-route to Earth, are called cosmogenic neutrinos. See Figure 1. Their energy spectrum encodes information about their parent UHECRs – notably, their energy distribution mass composition, and the maximum energy that they reach. Cosmogenic neutrinos also carry information about the population of UHECR sources – their number density and distances – that can help narrow down the list of candidate UHECR source classes. In addition to cosmogenic neutrinos, ultra-high-energy neutrinos can also be produced in interactions that take place inside the UHECR sources. These neutrinos, unlike cosmogenic ones, would point back to individual sources when detected at Earth, so they are capable of revealing individual UHECR sources.

Yet, so far, ultra-high-energy neutrinos have eluded detection. In recent years, it has become clear that their flux is likely so low that a large neutrino detector – larger than the ones that currently exist – is needed in order to discover and study them. GRAND is such a detector and is especially designed to tackle this challenge.

Neutrinos ordinarily interact feebly with matter and are able to travel through the Earth without being stopped. However, the probability of neutrinos interacting with matter grows with their energy. Hence, ultra-high-energy neutrinos that arrive at Earth have a significant chance of interacting underground, inside the Earth.

When one of the three known types of neutrinos – “tau neutrinos” – interacts underground, it produces a short-lived particle – a “tau lepton” – that exits into the atmosphere. There, it decays and creates a shower of new particles, including many billions of electrons and positrons that, under the influence of the Earth's magnetic field, emit an impulsive radio signal in the MHz frequency range. This signal can be detected using rather simple antennas sensitive in the 50-200 MHz regime. This is the detection principle of GRAND. It is illustrated in Figure 2.

Because the expected flux of ultra-high-energy neutrinos is very low, we need a huge detector to increase the chances of detection. Therefore, GRAND is designed to cover a total area of 200,000 km2 with antennas, making it the world's largest radio array. Moreover, GRAND will be sensitive to similar radio signals created by ultra-high-energy cosmic rays and gamma rays, making it a versatile ultra-high-energy observatory, not just a neutrino detector.

For years, the technique of radio-detection of ultra-high-energy particles has been explored by other experiments, like the Pierre Auger Observatory and LOFAR. However, the sheer scale of GRAND represents a logistical challenge. We will meet it by building GRAND in stages of progressively larger arrays. At each stage, the science goals and the research and development (R&D) will go hand-in-hand.

Presently, GRANDProto300, a 300-antenna engineering array, is under construction near the town of LengHu in the QingHai province of China. It will already be sensitive enough to study the transition energies at which the origin of the observed cosmic rays starts being dominated by extragalactic sources. It will also search for transient radio signals from astrophysical events such as fast radio bursts and giant radio pulses.

The next stage, GRAND10k, will consist of 10000 antennas. It will be the first stage of GRAND large enough provide the first chance of detecting ultra-high-energy neutrinos. The construction of GRAND10k is expected to start in approximately five years. GRAND10k will also detect record numbers of ultra-high-energy cosmic rays and achieve the best sensitivity for ultra-high-energy gamma rays.

The final, target stage, GRAND200k will consist of 200,000 antennas. These antennas will be set-up in several ( approximately 20) different “hotspots”, that is, favorable, radio-quiet locations in the world. At this stage, GRAND will reach its full physics potential, notably, the best sensitivity to ultra-high-energy neutrinos. GRAND200k is planned for the 2030s. The rich science case and challenging R&D required to create GRAND is attracting scientists from different countries to work together. Steps to formalize the GRAND organizational structure through Memoranda of Understanding between different institutes are being prepared. In addition, the QingHai government is providing the necessary infrastructure and it ensures that the GRAND10K site will be free of man-made background sources. In addition to bringing great science, GRAND may also become a successful example of a truly world-wide scientific collaboration under Chinese leadership.