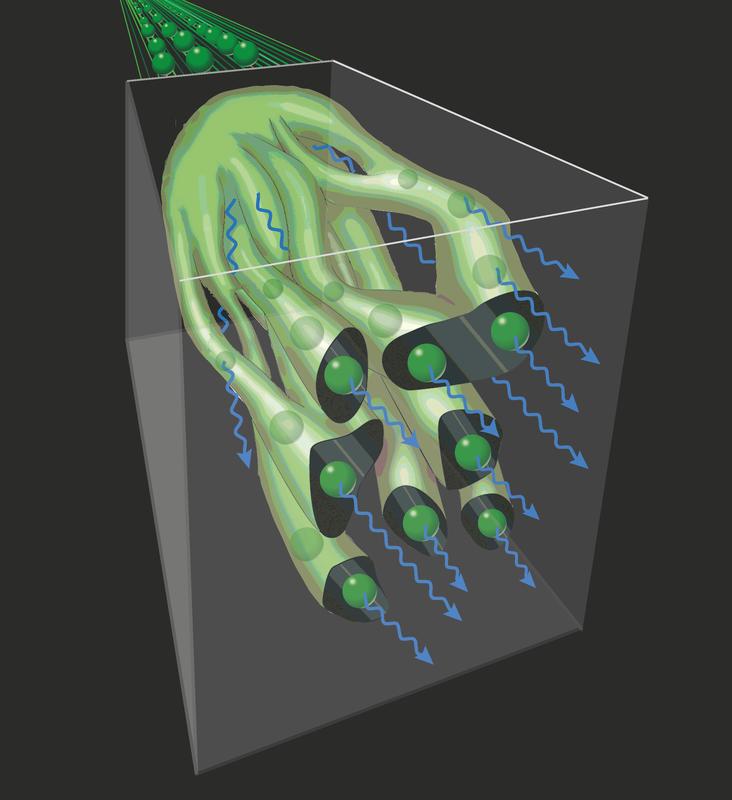 Fig. 1: Illustration of the efficient Gamma-ray emission (blue) from an ultra-relativistic high-density electron beam (green) which splits into filaments while passing through a thin metal foil. (c) MPIK

The typical wavelength of light interacting with an object of the microcosm scales with the size of this object. For atoms, this ranges from visible light to ultraviolet (UV) and X-rays. The development of increasingly powerful radiation sources for high-energy photons of this type has been very successful over the last two decades.

Synchrotrons and free-electron lasers produce high-intensity UV and X-rays for basic research or for a variety of applications. For the interaction with atomic nuclei, which are ten to a hundred thousand times smaller than atoms, it needs the even shorter-wave and higher-energy gamma radiation. To date, there are no efficient gamma-ray sources. However, these are of great interest for researchers because they would offer completely new, unprecedented opportunities: from the study of nuclear structure and exotic processes in nuclei to nuclear and medical applications.

Various methods have been proposed to generate intense gamma-rays with photon energies of several million electron volts (eV). For comparison, the energy of a photon of visible light is about 2 eV. All proposals are based on acceleration of electrons with an extremely powerful laser and subsequent conversion of the electron energy into gamma-rays.

One method of this type has been projected recently at the “Extreme Light Infrastructure” (ELI) in Romania: here, optical photons of a laser beam colliding with relativistic electrons are scattered up to gamma energies (Compton effect). However, the energy transfer efficiency is (like all other mechanisms discussed so far) low: only approximately 10% using a laser of the 10-petawatt class (1 petawatt = 10¹⁵ watt).

Physicists around team leader Matteo Tamburini of the department “Theoretical Quantum Dynamics and Quantum Electrodynamics” headed by Christoph Keitel at the Max Planck Institute for Nuclear Physics (MPIK) in Heidelberg have proposed a novel mechanism: their model calculations show that up to 60% conversion efficiency can be achieved if a high-energy (2 billion eV) well-focused high-density electron beam is shot at a thin (0.5 mm) electrically conductive solid plate as a target.

Under “normal” circumstances, the electrons would produce the well-known “bremsstrahlung”, as in an X-ray tube. Here, deflection and deceleration of the electrons at the atomic nuclei – as an accelerated movement of charged particles – leads to radiation emission according to the laws of electrodynamics. The energy of the emitted photons covers a broad spectrum up to the (maximum convertible) kinetic energy of the electrons as an upper limit.

At very high electron densities in the electron beam (comparable to the density of molecules in air), the target material starts to act back on the electron beam itself. As the main feedback, the free electrons the conductor form a counterpropagating current which compensates the penetrating electron beam. Both overlapping currents create strong electromagnetic fields and instabilities, causing the incident electron beam to break up into individual filaments (see the illustration in Figure 1). This, in turn, reinforces the self-generated fields, which cause violent accelerations of the ultra-relativistic electrons, ultimately leading to a gigantic emission of synchrotron radiation. This exceeds the usual bremsstrahlung by up to a factor of 1000 in “brilliance”. This is a measure of the number of photons per time, area, energy interval and solid angle. The latter describes the bundling of the radiation in the forward direction.

Figure 2 shows the spectral brilliance as a function of the photon energy for the most efficient synchrotron sources (red), energy conversion via the Compton effect (yellow ELI) and for the new method (blue). Compared with ELI, more than two orders of magnitude both in brilliance and in gamma-ray energies could be expected. Another disadvantage of the Compton scattering is the difficulty of overlapping and synchronizing the laser and electron beams. Furthermore, the new method is very efficient – up to 60% of the energy of the electrons could be converted into gamma-rays. The duration of the ultrashort gamma-ray flashes – determined by the length of the electron bunches – could be shorter than 30 femtoseconds (1 femtosecond = 10⁻¹⁵ s).

The electron density required for the self-amplification of electromagnetic fields is a technical challenge. Conventional 200 terawatt lasers (1 terawatt = 10¹² watt) with a 1 to 10 hertz repetition rate (a few flashes per second) are routinely available for generating and accelerating ultra-relativistic electron beams, and the new method could operate even with 100-1000 times higher repetition rate. However, the electron density achieved so far in experiments is still a factor of 10 to 100 too low. The total electron flow would be sufficient, but a stronger focusing of the beam onto the target would be required for efficient production of gamma-rays. A typical target would be metal foil of about 0.5 mm thickness. Strontium was investigated in the simulation, but the type of metal is not critical – conventional aluminum should also be a suitable target material.