Gamma bubbles of the Milky Way 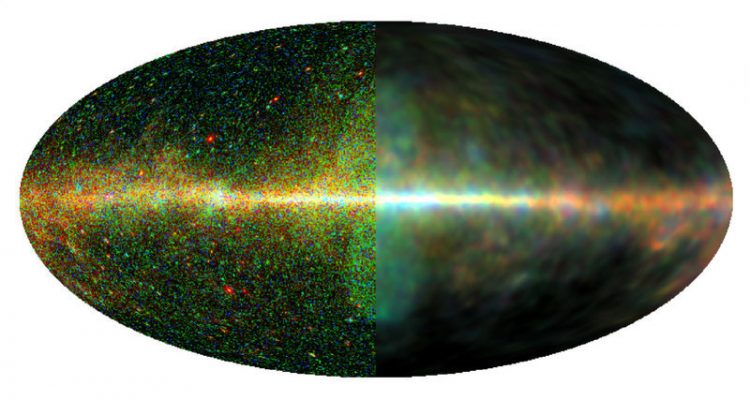 The Milky Way in gamma ray light: The left half shows the grainy raw data; the right half the processed data. The researchers have developed a statistical algorithm that helps remove the noise as well as instrumental artefacts and separates diffuse and point-like structures from each other. The images reveal interesting details such as the so-called Fermi bubbles (centre), extending over 50,000 light-years, about the origins of which astronomers are still puzzled. © MPA / Marco Selig

The anatomy of the Milky Way as seen in gamma light is full of mysteries. For example, there are gigantic bubbles of unknown origin above and below the centre of the Milky Way that emit a lot of this high-energy radiation.

A new method for imaging, developed at the Max Planck Institute for Astrophysics, now divided the Galactic gamma-radiation into three fundamental components: radiation from point sources, radiation from reactions of energetic protons with dense cold gas clouds, and radiation from electrons scattering light in the thin, hot, Galactic gas. The anatomic insights gained unravel some Galactic mysteries. Thus, it appears that the gamma-ray bubbles are simply outflows of ordinary, hot gas.

The sky in the light of gamma-radiation shows a variety of objects, structures, and astrophysical processes. It is most prominently illuminated by the Milky Way, which contributes a great part of the point sources as well as the major part of the diffuse gamma-radiation in the sky. The various radiation sources appear superimposed, which complicates their identification and interpretation. Furthermore, our measurement instruments, such as the Fermi satellite, record only individual gamma photons arriving at random times from random directions. These are highly energetic light particles, whose observation requires complex imaging algorithms in order to reconstruct sky maps. A new method for denoising, deconvolving, and decomposing photon observations, called D³PO (link: http://www.mpa-garching.mpg.de/mpa/research/current_research/hl2013-12/hl2013-12-en.html), developed at the Max Planck Institute for Astrophysics, has now created the by far most brilliant gamma-radiation map of the sky from the data of the Fermi satellite.

D³PO has decomposed the gamma-ray sky into point sources and diffuse radiation at nine photon energies. From these, a coloured image can be generated, which shows the diffuse sky as it would appear to an observer with gamma-eyes. The different astrophysical processes can be recognized therein via their different energy spectra, visible as different colours. The gamma-bubbles above (and below) the centre of the Milky Way appear blue-greenish, which indicates particularly high-energy gamma-radiation. This should have been mainly generated by collisions of electrons that are moving almost with the speed of light with starlight and other photons. The orange-brown areas on the right and left side are primarily caused by collisions of super-fast protons with nuclei in dense, cold gas clouds.

The big surprise was that the central bright Galactic disk, and virtually all other areas of the sky, shows essentially just a superposition of these two processes: collisions of protons with nuclei and of electrons with photons. If we decompose the diffuse gamma-radiation into only these two processes, more than 90% of the radiation is explained – and this at all studied sky locations and energies. The total diffuse galactic gamma-radiation is thus produced almost exclusively by two typical media: dense, cold gas clouds and the thin, hot gas between them. In fact, gamma-radiation coming from the clouds shows almost the same spatial distribution as the Galactic dust clouds as measured by the Planck satellite in the microwave range.

The gamma-radiation generated by electrons in the mysterious gamma-ray bubbles does not differ in colour from the electron-generated radiation from the Galactic disk. This suggests that we see the same material in both places: hot gas that has been enriched with electrons moving almost at the speed of light by supernova explosions. The gamma-bubbles are therefore simply rising hot gas masses, leaving the centre of our Milky Way.

In addition to unravelling the gamma-ray bubbles, the D³PO analysis of the anatomy of Galactic gamma-radiation has delivered a number of other scientific results. It was shown that the cold gas clouds that are illuminated by the gamma-radiation extend up to larger heights above the Galactic plane than the dust clouds measured by the Planck satellite. While this could have been expected due to the higher mass of dust particles in comparison with the gas particles, it is a nice confirmation of the astrophysical correctness of these anatomical dissections of the Galaxy in gamma light. Furthermore, a comprehensive catalogue of point sources was generated and searched for gamma-radiation from clusters of galaxies – unfortunately without success.

The D³PO algorithm that has made all this possible is now freely available and will in the future also provide astronomical images at other wavelengths of light. D³PO was developed by Marco Selig during his just-completed doctorate with honours at the Ludwigs-Maximilians-Universität München. The algorithm was derived within information field theory and implemented using the also freely available NIFTY- software for numerical information field theory. Information field theory deals with the mathematics of imaging complex data sets and is a central focus of the research group of Torsten Ensslin at the Max Planck Institute for Astrophysics.