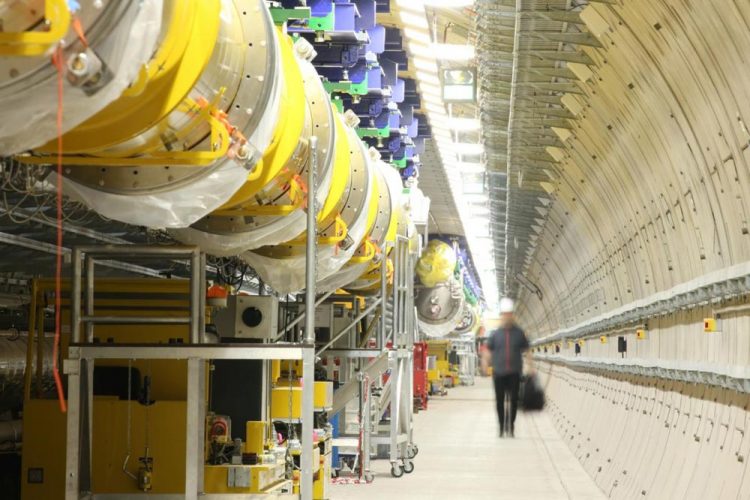 Nuclear physics usually involves high energies, as illustrated by experiments to master controlled nuclear fusion. One of the problems is how to overcome the strong electrical repulsion between atomic nuclei which requires high energies to make them fuse.

But fusion could be initiated at lower energies with electromagnetic fields that are generated, for example, by state-of-the-art free electron lasers emitting X-ray light. Researchers at the Helmholtz-Zentrum Dresden-Rossendorf (HZDR) describe how this could be done in the journal Physical Review C.

During nuclear fusion two atomic nuclei fuse into one new nucleus. In the lab this can be done by particle accelerators, when researchers use fusion reactions to create fast free neutrons for other experiments. On a much larger scale, the idea is to implement controlled fusion of light nuclei to generate power – with the sun acting as the model: its energy is the product of a series of fusion reactions that take place in its interior.

For many years, scientists have been working on strategies for generating power from fusion energy. “On the one hand we are looking at a practically limitless source of power. On the other hand, there are all the many technological hurdles that we want to help surmount through our work,” says Professor Ralf Schützhold, Director of the Department of Theoretical Physics at HZDR, describing the motivation for his research.

Tunneling at a high level, to be accessible soon

In order to trigger nuclear fusion, you first have to overcome the strong electrical repulsion between the identically charged atomic nuclei. This usually requires high energies. But there is a different way, explains the co-author of the study, Dr. Friedemann Queißer: “If there isn't enough energy available, fusion can be achieved by tunneling. That's a quantum mechanical process. It means that you can pass (i.e., tunnel) through the energy barrier caused by nuclear repulsion at lower energies.”

This is not some theoretical construct; it really happens: The temperature and pressure conditions in the sun's core do not suffice to overcome the energy barrier directly and enable hydrogen nuclei to fuse. But fusion happens nonetheless because the prevailing conditions allow the fusion reaction to be sustained thanks to a sufficiently high number of tunneling processes.

In their current work, the HZDR scientists are investigating whether controlled fusion could be facilitated with the assistance of tunneling processes using radiation. But that is also a question of energy: the lower it is, the lesser the likelihood of tunneling. Up to now, conventional laser radiation intensity was too low to trigger the processes.

This could all change in the near future: With X-ray free electron lasers (XFEL) it is already possible to achieve power densities of 10^20 watts per square centimeter. This is the equivalent of approximately a thousand times the energy of the sun hitting the earth, concentrated on the surface of a one-cent coin. “We are now advancing into areas that suggest the possibility of assisting these tunneling processes with strong X-ray lasers,” says Schützhold.

The idea is that the strong electric field causing the nuclei repulsion is superimposed with a weaker, but rapidly changing, electromagnetic field that can be produced with the aid of an XFEL. The Dresden researchers investigated the process theoretically for the fusion of the hydrogen isotopes deuterium and tritium. This reaction is currently considered to be one of the most promising candidates for future fusion power plants. The results show that it should be possible to increase the tunneling rate in this way; a sufficiently high number of tunneling processes could eventually facilitate a successful, controlled fusion reaction.

Today, just a handful of laser systems around the world with the requisite potential are the flagships of large-scale research facilities, like those in Japan and the United States – and in Germany where the world's strongest laser of its type, the European XFEL, is to be found in the Hamburg area. At the Helmholtz International Beamline for Extreme Fields (HIBEF) located there, experiments with unique ultra-short and extremely bright X-ray flashes are planned. HZDR is currently in the process of constructing HIBEF.

The Dresden strong field physicists' next step is to dive even deeper into the theory in order to understand other fusion reactions better and be able to assess their potential for assisting tunneling processes with radiation. Analogous processes have already been observed in laboratory systems, such as quantum dots in solid-state physics or Bose-Einstein condensates, but in nuclear fusion experimental proof is still pending. Thinking yet further ahead, the authors of the study believe other radiation sources could possibly assist tunneling processes. The first theoretical results on electron beams have already been obtained.

HZDR is a member of the Helmholtz Association and has five sites (Dresden, Freiberg, Grenoble, Leipzig, Schenefeld near Hamburg) with almost 1,200 members of staff, of whom about 500 are scientists, including 170 Ph.D. candidates.