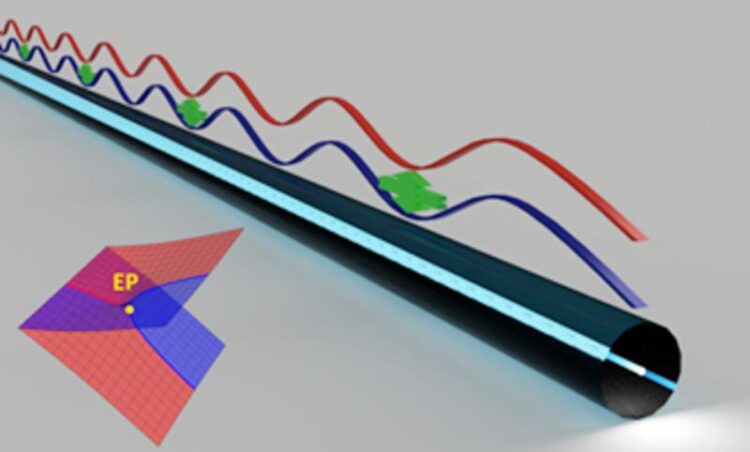 Schematic diagram of a fiber-based anti-parity-time system Changes in optical intensity (red and blue lines) propagating along an optical fiber and symmetry-breaking transition at an exceptional point are illustrated.
Credit: POSTECH

When optical gain or loss are precisely controlled using nanophotonics, a new physical event called the non-Hermitian phenomenon can be observed, potentially the next-generation technology of optical signal control and sensing. However, it is difficult to control the optical gain and loss in optical experiments precisely.

The Hermitian-Hamiltonian operator has been used for a long time as a basic operating principle of quantum physics, assuming that there is no energy loss in a closed system. However, all physical systems in an open system have energy loss, which is treated as a simple imperfection and compensated by amplification.

However, the recently emerging field of non-Hermitian physics extends the basic operating principle by giving gain and loss a new role other than simple correction to incomplete systems. Demonstrating physical phenomena different from those of the standard Hermitian-Hamiltonian dynamics is attracting attention as the next generation signal and energy control technology.

Among the non-Hermitian physical systems, anti-parity-time (APT) symmetry systems consisting of balanced gain and loss can induce symmetry-breaking transitions that occur at an exceptional point, energy-difference conservation, and synchronized power oscillations. However, optical energy-difference conservation and synchronized power oscillation have not yet been observed due to the difficulty of balancing perfectly optical gain and loss.

To this, the researchers produced an APT symmetry platform based on nonlinear four-wave-mixing (FWM) using optical fibers widely used in optical communication. Using optical fibers enabled a simple experimental device with an elongated interaction length with little energy loss, which has been difficult to access even in nano-photonics due to the fabrication limitations.

Using the proposed method, the researchers observed synchronized oscillations of optical intensity thanks to the long optical fibers as well as symmetry-breaking transitions at an exceptional point. In addition, using the low loss and nonlinearity of optical fibers, the energy-difference conservation – a unique behavior of the APT symmetry systems – was observed for the first time in the optical domain.

“This study provides an efficient experimental framework for research on non-Hermitian physics,” explained Professor Heedeuk Shin of POSTECH. “It will contribute to higher-level non-Hermitian research and become an important stepping stone for interdisciplinary research including materials development and quantum information science.”

The findings from this study were published in Physical Review Letters (published by the American Physical Society) on August 17, 2021.