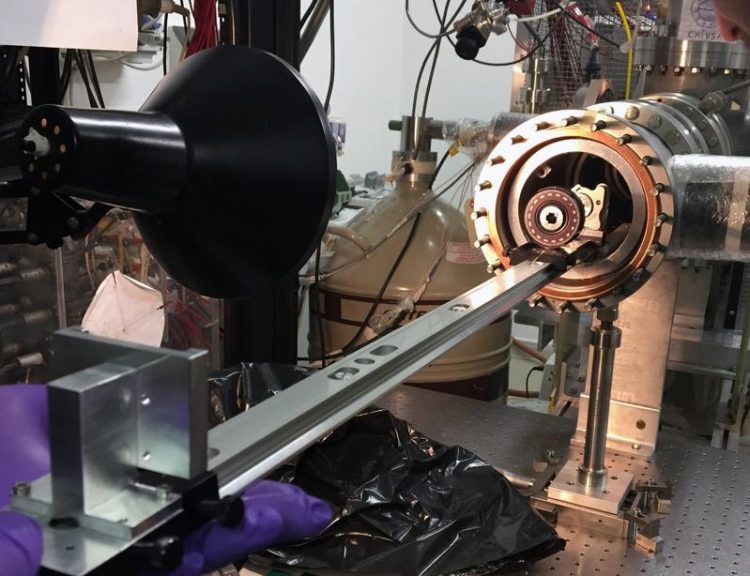 The Talbot-Lau interferometer of the QUPLAS collaboration at the Positron Laboratory of the Politecnico di Milano in Como. LHEP / AEC, University of Bern

Matter waves constitute a crucial feature of quantum mechanics, where particles have wave properties in addition to particle characteristics. This wave-particle duality was postulated already in 1924 by the French physicist Louis de Broglie.

The existence of the wave property of matter has been successfully demonstrated in a number of experiments with electrons and neutrons, as well as with more complex matter, up to large molecules.

For antimatter the wave-particle duality had also been proven through diffraction experiments. However, researchers of the QUPLAS collaboration now established the wave behavior in a single positron (antiparticle to the electron) interference experiment. The results are reported in the Science Advances journal.

An experiment already envisaged by Einstein

The QUPLAS scientific collaboration includes researchers from the University of Bern and from the University and Politecnico of Milano. To demonstrate the wave duality of single positrons they performed measurements with a setup similar to the so-called double-slit experiment.

This setup was already suggested as a gedankenexperiment by famous physicists like Albert Einstein and Richard Feynman; it is often used in quantum theory to demonstrate the wave nature of particles. In the experiment particles (in this case positrons) are directed from a source to a position sensitive detector.

In between there are gratings with patterns of two or more slits which the particles go through. Particles behaving like particles travel in straight lines and would produce a pattern corresponding exactly to the grating.

If the particles have a wave nature, a striped interference pattern appears at the detector which is different from the grating.

The new pattern is generated by the superposition of the waves emitted by the source and travelling through the grating.

The researchers of the QUPLAS collaboration were able to generate for the first time such an interference pattern from single antimatter particle waves. It was obtained thanks to an innovative period-magnifying Talbot-Lau interferometer coupled to a nuclear emulsion position sensitive detector.

“With the nuclear emulsions we are able to determine the impact point of individual positrons very precisely which allows us to reconstruct their interferometric pattern with micrometric accuracy – thus to better than millionth of a meter”, explains Dr. Ciro Pistillo of the Laboratory of High Energy Physics (LHEP) and Albert Einstein Center (AEC) of the University of Bern. This feature allowed the researchers to overcome the main limitations of antimatter experiments, namely low antiparticle flux and beam manipulation complexity.

The scientists of LHEP and AEC played a key role for the success of the project: Akitaka Ariga, Antonio Ereditato, Ciro Pistillo and Paola Scampoli were in particular responsible for the design, construction and operations of the emulsion detector and for the analysis of positron interaction data.

New field of investigations of antimatter

“Our observation of the energy dependence of interference pattern proves its quantum-mechanical origin and thus the wave nature of the positrons”, says Professor Paola Scampoli. The success of the experiment paves the way to a new field of investigations based on antimatter interferometry.

A goal is for example to perform gravity measurements with exotic matter-antimatter symmetric atoms such as positronium. With this one could test the validity of the Weak Equivalence Principle for antimatter. This principle is at the basis of general relativity and has never been tested with antimatter. Future research fields based on antimatter interferometry could in the future provide information about the imbalance of matter and antimatter in the universe.