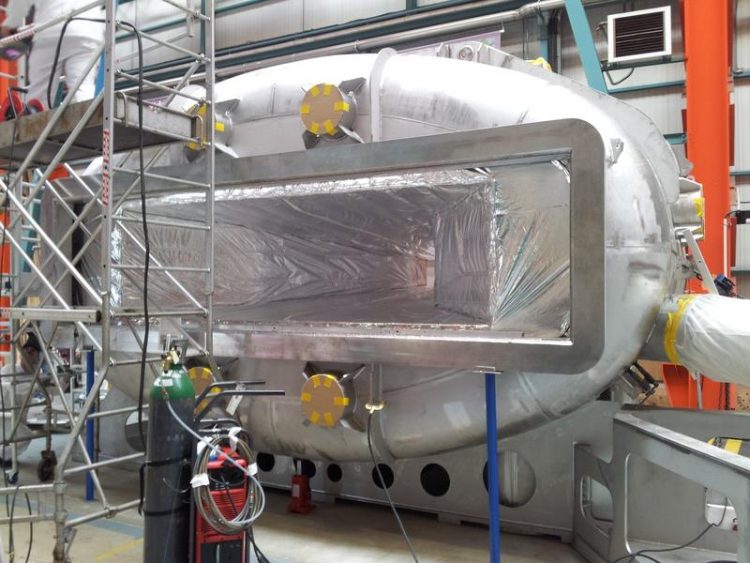 In the French Technology Research Center CEA the superconducting coils of GLAD were inserted into the cryostat, with which the magnet can be cooled to 4.5 Kelvin. Felix Wamers

The NUSTAR researchers intend to examine the characteristics of rare and extremely unstable atomic nuclei with large numbers of neutrons and how they are created in supernovae. In this manner the scientists would ultimately like to find out how our elements have been created in such massive starbursts.

Some 50 engineers and scientists at the French technology research center CEA in Saclay – with the support of industry partners – have, over a period of many years, developed a superconducting magnet for the R3B experiment in the NUSTAR collaboration at FAIR, the GLAD magnet (GSI Large Acceptance Dipole).

In the R3B experiment the NUSTAR scientists will examine extremely rare and highly neutron-rich nuclei, which for the first ever may now be created at the FAIR complex in sufficient amounts as a secondary beam. If such neutron-rich atomic nuclei fly close to other atomic nuclei of the so-called target, they are excited, oscillate and collapse, by emitting neutrons for example.

Thus they reveal to scientists something about their structure, for instance the formation of neutron skins. Thus they can possibly answer the fundamental question of why uncharged neutrons in certain numbers can stabilize atomic nuclei such that it was possible for all the heavy elements such as lead, gold and uranium which we now find on earth could be formed in supernovae (starbursts).

The GLAD magnet separates the charged particles from the uncharged neutrons directly behind the target and thus allows for their analysis. The particular technological challenge: the magnet has a large horizontal and a large vertical angular aperture so as measure both charged particles and nuclear fragments.

At the same time it creates a strong, highly homogenous magnetic field. This is necessary because the particles have a large momentum. In addition, the superconducting magnet coils do not have an iron core to amplify the magnetic field, thus making the magnet an overall “lightweight” of merely 60 tonnes. For this reason it can be transported by road as a heavy load from France to Darmstadt.