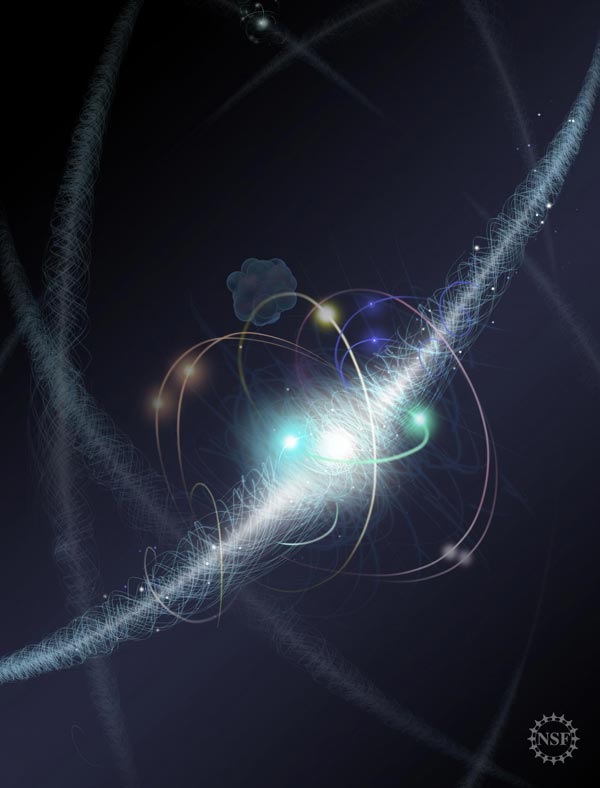 In this artist's representation, an electron orbits an atom's nucleus, spinning about its axis as a cloud of other subatomic particles are constantly emitted and reabsorbed. Some theories in particle physics predict particles, as yet undetected, that would cause the cloud to appear very slightly pear-shaped when seen from a distance. With the support of the National Science Foundation, ACME researchers created an experimental setup look at that shape with extreme precision. To the limits of their experiment, they saw a perfectly round sphere, implying that certain types of new particles, if they exist at all, have properties different from those theorists expected. Credit: Nicolle R. Fuller, NSF

An unprecedented, close examination of the electron has opened a window into the mind-bending nature of particles, energy and forces at infinitesimal scales.

The findings, showing a spherical shape for the electron's charge, emerged from the Advanced Cold Molecule Electron Electric Dipole Moment (ACME) Search, funded by the National Science Foundation (NSF). The results support the strength of the Standard Model of particle physics, a longstanding theory describing most of the fundamental forces and particles in the universe, and seems to force several alternative theories into revision.

Led by researchers from Yale, Harvard and Northwestern universities, the ACME team reported their results in the Oct. 18 issue of Nature.

Whether the emptiness between stars or the emptiness between molecules, experiments have shown that upon close examination, any vacuum is not truly empty. All manner of subatomic particles — and their antimatter counterparts — constantly pop in and out of existence and annihilate each other on contact. That environment influences the electron, its round, negative charge defined by the constant interaction.

Many theories — involving such concepts as “supersymmetry” and “grand unification” — posit that some undiscovered subatomic particles would be revealed if researchers were able to look closely at an electron and find that its spherical charge was slightly squashed.

That would require an extreme observation, akin to measuring an Earth-sized sphere to a precision of a few atoms' thickness.

The ACME researchers did look that closely at the electron's charge — and found that the sphere appeared to be perfectly round.

“An electron always carries with it a cloud of fleeting particles, distortions in the vacuum around it,” said John Gillaspy, program director for NSF's Atomic, Molecular and Optical Physics program. “The distortions cannot be separated from the particle, and their interactions lead to the ultimate shape of the electron's charge, called the electric dipole moment, or EDM.”

For nearly a decade, NSF supported the ACME team's ever-more-precise experiments in pursuit of such observations.

“Supporting this work involved committing significant resources to a high-risk, high-reward idea,” Gillaspy said. “The investment was relatively large, and the timescale was relatively long, but these new results demonstrate the risk was worth taking. When it comes to precision measurements, big advances often require a daring spirit and a large amount of patience.”

ACME uses a unique process that involves firing a beam of cold thorium-oxide molecules — 1 million per pulse, 50 times per second — into a chamber the size of a large desk.

“Probing the shape of the electron's charge has far-reaching implications for fundamental physics but can be done with an experiment of modest size,” said Gerald Gabrielse, who leads the ACME group at Northwestern. “The entire ACME team consisted of only about a dozen researchers, using an apparatus that fits in a basement room at Harvard.”

Within that relatively small chamber, lasers orient the molecules — and their electrons — as they soar between two charged glass plates inside a carefully controlled magnetic field.

ACME researchers then watch for light the molecules emit when targeted by an additional, carefully tuned, set of “readout” lasers. That light reveals whether the electron's orientation twists during flight, as would occur if it were squashed.

“It is an exciting development for particle physics,” said John Doyle, who leads the ACME group at Harvard, “Room-sized, quantum-enabled measurements are helping to advance the frontier in particle physics and probing leading theories for the existence of matter in our universe.”

The Standard Model predicts that interaction with specific particles does indeed squash an electron's charge ever so slightly, but the effect would only be noticeable at a resolution 1 billion times more precise than ACME observed.

By controlling some three dozen parameters, from the tuning of the lasers to the timing of the experimental steps, the ACME team achieved a tenfold improvement over the last record holder, a prior experiment they performed with a simpler apparatus in 2014. With further refinement, ACME expects to get at least another tenfold improvement on their precision.

“The Standard Model makes predictions that differ radically from its alternatives and ACME can distinguish those,” noted David DeMille, who leads the ACME group at Yale. “Our result tells the scientific community that we need to seriously rethink some of those alternative theories.”