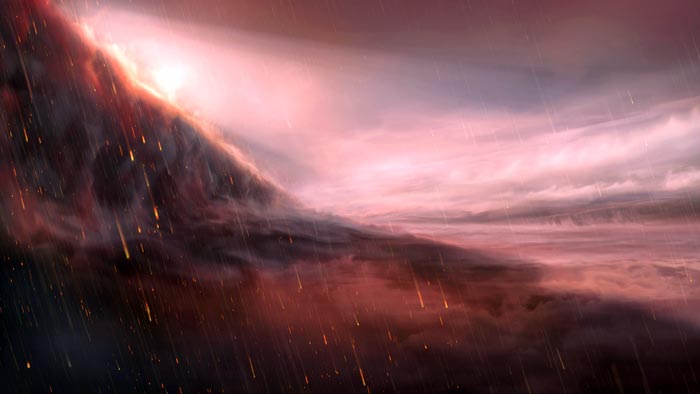 The fiery exoplanet WASP-76b – a so-called hot Jupiter, where it rains iron – may be hotter than previously thought.
Credit: ESO/M. Kornmesser

Considered an ultra-hot Jupiter – a place where iron gets vaporized, condenses on the night side and then falls from the sky like rain – the fiery, inferno-like WASP-76b exoplanet may be even more sizzling than scientists had realized.

An international team, led by scientists at Cornell University, University of Toronto and Queen’s University Belfast, reports the discovery of ionized calcium on the planet – suggesting an atmospheric temperature higher than previously thought, or strong upper atmosphere winds.

The discovery was made in high-resolution spectra obtained with Gemini North near the summit of Mauna Kea in Hawaii.

Hot Jupiters are named for their high temperatures, due to proximity to their stars. WASP-76b, discovered in 2016, is about 640 light-years from Earth, but so close to its F-type star, which is slightly hotter than the sun, that the giant planet completes one orbit every 1.8 Earth days.

The research results are the first of a multiyear, Cornell-led project, Exoplanets with Gemini Spectroscopy survey, or ExoGemS, that explores the diversity of planetary atmospheres.

“As we do remote sensing of dozens of exoplanets, spanning a range of masses and temperatures, we will develop a more complete picture of the true diversity of alien worlds – from those hot enough to harbor iron rain to others with more moderate climates, from those heftier than Jupiter to others not much bigger than the Earth,” said co-author Ray Jayawardhana, Harold Tanner Dean of the College of Arts and Sciences at Cornell University and a professor of astronomy.

“It’s remarkable that with today’s telescopes and instruments, we can already learn so much about the atmospheres – their constituents, physical properties, presence of clouds and even large-scale wind patterns – of planets that are orbiting stars hundreds of light-years away,” Jayawardhana said.

The group spotted a rare trio of spectral lines in highly sensitive observations of the exoplanet WASP-76b’s atmosphere, published in the Astrophysical Journal Letters on Sept. 28 and presented on Oct. 5 at the annual meeting of the Division for Planetary Sciences of the American Astronomical Society.

“This spectral signature of ionized calcium could indicate that the exoplanet has very strong upper atmosphere winds,” Deibert said. “Or the atmospheric temperature on the exoplanet is much higher than we thought.”

Gemini North is part of the international Gemini Observatory, a program of National Science Foundation’s NOIRLab.