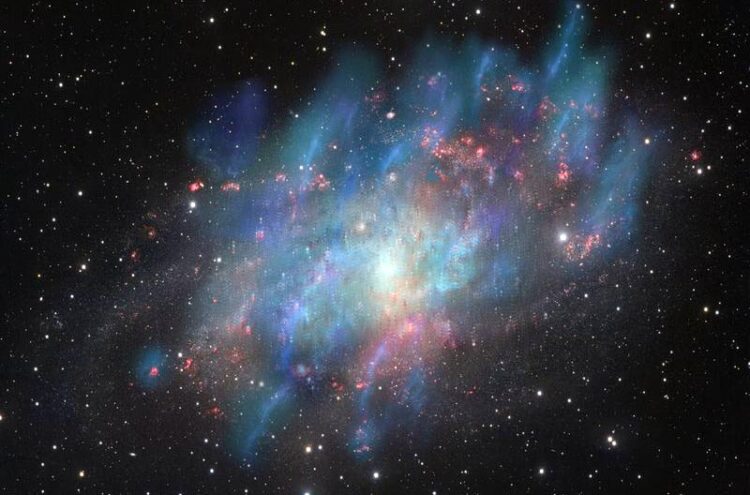 Studying the interplay between massive star formation and the interstellar medium is important to understand the evolution of galaxies.

An international research team led by Fatemeh Tabatabaei including several scientists from the Max Planck Institute for Radio Astronomy in Bonn, Germany, performed high-resolution radio observations of the local group galaxy Messier 33 with the Karl G. Jansky Very Large Array (VLA). Their results show a direct connection between molecular gas and star formation exists in M33. Massive star formation amplifies the magnetic field and increases the number of high-energy cosmic ray electrons, which can help the onset of winds and outflows.

Galaxies are systems of stars and interstellar gas in interaction. Observations show that galax-ies today are forming fewer stars than they did in the past. As cold gas is needed to form stars, models link the deceleration of star formation and the observed evolution of galaxies to galactic winds removing cold gas.

Galactic winds originate in the disks of galaxies and extend to the halo and intergalactic me-dium, however, their origin is still under debate. Supernova explosions and active galactic nu-clei (AGN) can drive powerful winds but their role in hindering star formation is complicated by the fact that the gas of their winds can fall back to the galaxy disk and trigger the for-mation of new stars. Thanks to new radio observations with the Karl G. Jansky Very Large Array, an international team of researchers found evidence for cosmic rays as an alternative agent of galactic winds in our neighbor galaxy M33 in the constellation Triangulum (the Trian-gle) at a distance of 2.7 million light-years from the Earth. This galaxy is smaller than the Milky Way by about 23 times in mass.

Cosmic rays are high-energy particles that can travel at speeds comparable to the speed of light. They can increase the pressure in the interstellar medium, drive outflows, and change structures galaxy-wide. Previous studies had indicated the importance of cosmic ray driven winds in driving bubbles on scales of a few thousand light years in the Milky Way and the Andromeda galaxy.

“This is the first time that we find evidence for such winds in a low-mass star-forming spiral galaxy such as M33”, says Fatemeh Tabatabaei, the principal investigator of this research. ‘This evidence emerged from a contradiction when we found that cosmic ray electrons are more energetic in regions where the magnetic field is also stronger. In a strong magnetic field, it is expected that cosmic ray electrons lose energy to a stronger synchrotron radiation.” Tabatabaei conducted her dissertation research (Thesis: 2008) at the Max Planck Institute for Radio Astronomy (MPIfR) under the supervision of Rainer Beck, a coauthor of the present study.

This paradox can be resolved by taking the structure of the magnetic field into account. In star forming regions, the magnetic field is amplified due to turbulent gas motions by the im-pact of a dynamo mechanism that converts kinetic energy to magnetic energy. The resulting field is highly tangled. “The dynamo is a powerful mechanism that operates everywhere in the Universe: in stars, planets, galaxies, and even huge intergalactic gas clouds“, says Rainer Beck.

“This tangled structure of the magnetic field helps cosmic rays to scatter off before they lose their energy due to synchrotron cooling in the magnetic field. These high-energy cosmic rays can then easily mix with the background gas and plasma and create high pressure regions in the disk. The resulting pressure imbalance between the disk and outer layers in the halo causes winds”, says Fatemeh Tabatabaei.

The present study shows that cosmic ray driven winds can play a role in most galaxies, par-ticularly in those that have a relatively small mass, but active star formation, such as M33, sys-tems which are much more frequent than massive galaxies. Hence, in principle, the cosmic-ray driven winds can have also played an important role in removing gas at earlier epochs as they were even stronger due to higher star formation activities.

“In order to confirm and extend these findings to earlier epochs in the Universe, radio observa-tions of more distant galaxies are required which become feasible with future sensitive radio telescopes such as the Next Generation Very Large Telescope and the SKA Observatory”, con-cludes Karl Menten, Director at MPIfR and Head of its Millimeter and Submillimeter Re-search Department, also a co-author of the paper.

The Karl G. Jansky Very Large Array (JVLA) consists of 27 radio antennas in a Y-shaped configuration on the Plains of San Agustin fifty miles west of Socorro, New Mexico. Each antenna is 25 meters (82 feet) in diameter. The data from the antennas is combined electroni-cally to give the resolution of an antenna 36 km (22 miles) across, with the equivalent sensitiv-ity of a dish 130 meters (422 feet) in diameter. The VLA is operated by the National Radio Astronomy Observatory (NRAO), which is a facility of the National Science Foundation (NSF), operated under cooperative agreement by Associated Universities, Inc. (AUI).