Electrons and photons in a twin pack 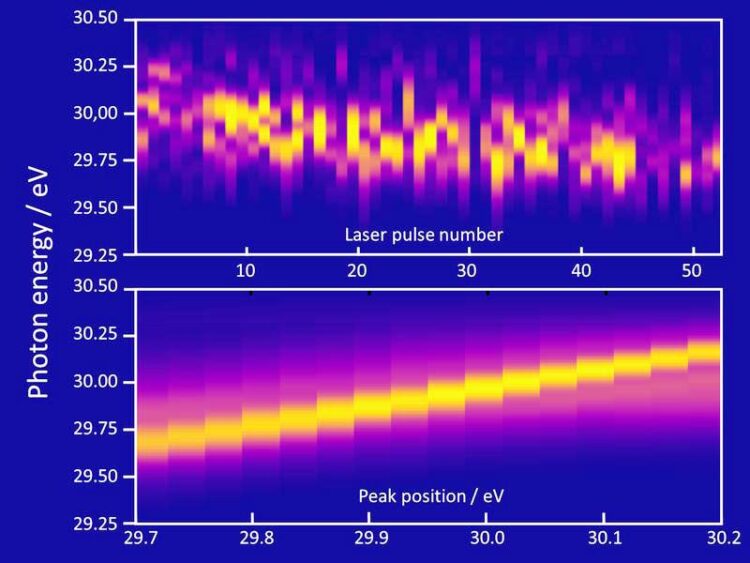 Using a new experimental method, physicists from the Max Planck Institute for Nuclear Physics in Heidelberg investigated the resonant two-photon ionisation of helium with improved spectral resolution and angular resolution.

For this purpose, they utilised a reaction microscope in combination with a high-resolution extreme-ultraviolet (EUV) photon spectrometer developed at the Institute. The measurements have been performed at the Free Electron Laser in Hamburg (FLASH), a brilliant radiation source, delivering intense EUV laser flashes. This allows the events from each individual laser flash to be analysed in terms of photon energy, yielding spectrally high-resolution data sets.

Helium, as the simplest and most accessible multi-electron system, is ideally suited for fundamental theoretical and experimental studies. Here, the mutual electrical repulsion of the two electrons plays an essential role – it accounts for a good third of the total binding energy. Of particular and fundamental interest is the interaction with photons (the quanta of light). Researchers from the groups around Christian Ott and Robert Moshammer in the division of Thomas Pfeifer at the Max Planck Institute for Nuclear Physics in Heidelberg have investigated the resonant two-photon ionisation of helium in detail at the free-electron laser FLASH of DESY in Hamburg.

In this nonlinear process, both electrons simultaneously absorb two extreme-ultraviolet photons and form a doubly excited state in which, illustratively, both electrons are on a large orbit around the helium nucleus. The correlated pair dance of the electrons is unstable and their mutual repulsion causes one to leave the atom while the other falls back to the ground state of the helium ion – a process called autoionization (see Fig. 1). It occurs when the sum energy of the photons just corresponds to the discrete excitation energy, i.e. when the so-called resonance condition is fulfilled.

For a detailed measurement, the researchers used a reaction microscope (REMI), which allows a kinematically complete detection of both the photoelectrons and the helium ions. However, a fundamental difficulty still had to be overcome: Although the free-electron laser delivers sufficiently intense ultraviolet radiation, the energy of the photons has a rather broad bandwidth and the energy range of highest intensity also varies from laser flash to laser flash.

However, it is this very property that has now been exploited: “We used a spectrometer to measure the energy distribution of the photons in each individual shot and then sorted them according to the photon energy with the highest intensity (peak position),” explains first author Michael Straub. “Synchronised with the REMI signals, we thus obtain spectrally high-resolution data sets, digitally tunable over the entire bandwidth.” (Fig. 2). The resonance was resolved with this trick and the angular distribution of the photoelectrons in the resonance measured. In direct comparison with theoretical calculations from the group of Chris Greene (Purdue University), there was good agreement, but also deviations upon closer inspection. One explanation is small contributions from non-resonant ionisation by single photons of twice the energy (red curve in Fig. 1), which account for about 1% of the FLASH photon flux.

“These results and the newly developed experimental methodology open up a promising avenue for exploring fundamental interactions of a few photons with a few electrons,” says group leader Christian Ott, summarising the scope of the work.