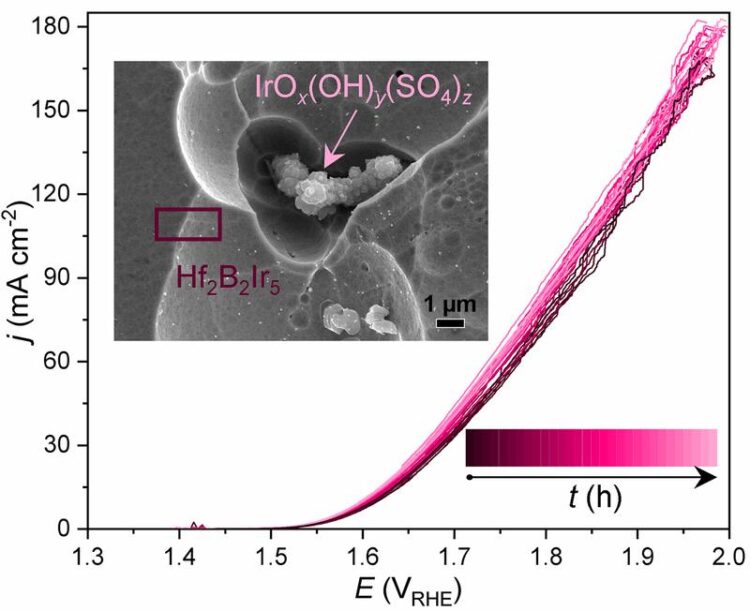 The water electrolysis is an electrochemical way for production of hydrogen, which is considered as one of the future energy carrier molecules. Therefore, looking at numerous advantages of proton exchange membrane electrolysis compared to the classical alkaline variant, it’s efficiency and applicability on the large scale is of huge importance nowadays.

However, the slow kinetics of the anode oxygen evolution reaction (OER) limits the overall electrolysis process and requires an active and stable electrocatalyst.

Such need inspired the scientists of Chemical Metal Science and Physics of Correlated Matter departments at MPI CPfS together with the Fritz-Haber-Institut in Berlin to employ their longstanding expertise in chemistry of intermetallic compounds, electronic features of solid matter and electrocatalysis to make a step forward in this challenging direction. As a result of fruitful teamwork, the concept of cooperative phases with different stabilities under OER conditions was successfully demonstrated with the intermetallic compound Hf2B2Ir5 as a self-optimizing electrocatalyst for OER.

Based on chemical bonding analysis, the intermetallic compound Hf2B2Ir5 has a cage-like type of the crystal structure: the two-dimensional layers of B2Ir8 units are interconnected by two- and three-center Ir-Ir interactions to polyanionic framework and hafnium atoms are guesting in such anionic cages. The atomic interactions features are reflected in the electronic structure of Hf2B2Ir5 and its chemical behaviour under OER conditions.

The initial electrochemical OER activity of Hf2B2Ir5 sustains during the continuous operation at elaborated current densities of 100 mA cm-2 for at least 240 h (Figure 1) and positions this material among Ir-based state-of-the-art electrocatalysts.

The harsh oxidative conditions of OER activate the surface-limited changes of the pristine material and as a result the electrochemical performance is related to the cooperative work of Ir-terminated surface of the ternary compound itself and agglomerates of IrOx(OH)y(SO4)z particles (inset of Figure 1). The latter are formed mainly due to the oxidation of HfB4Ir3 secondary phase and near-surface oxidation of the investigated compound.

The presence of at least two OER-active states of Ir, originated from the Hf2B2Ir5 under OER conditions, was confirmed by the XPS analysis (Figure 2). The experimental data (electrochemical results, material characterization using bulk-and surface-sensitive methods, elemental analysis of the used electrolyte) are consistent with the chemical bonding analysis. The illustrated concept of cooperative phases with different chemical stabilities under OER conditions can be explored to other systems and offers a perspective knowledge-based way for discovery of new effective OER-electrocatalysts.