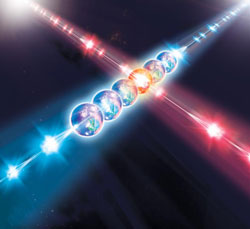 The mathematical description of the phenomenon to be investigated is programmed by using a series of laser pulses to perform a quantum calculation with atoms. Graphic: H. Ritsch<br>

They have realized a digital, and therefore, universal quantum simulator in their laboratory, which can, in principle, simulate any physical system efficiently. Their work has been published in the online issue of the journal Science.

Almost two years ago Rainer Blatt’s and Christan Roos‘ research groups from the University of Innsbruck recreated the properties of a particle moving close to speed of light in a quantum system. They encoded the state of the particle into a highly cooled calcium atom and used lasers to manipulate it according to equations proposed by the famous quantum physicist Paul Dirac. Thereby, the scientists were able to simulate so called Zitterbewegung (quivering motion) of relativistic particles, which had never been observed directly in nature before. In the current work, the physicists use a digital approach instead of the previous analogue approach, and this universal digital quantum simulator can potentially be programmed to simulate any physical system efficiently. “We show in our experiment that our method works and that we can virtually recreate and investigate many systems,” explains Benjamin Lanyon from the Institute of Quantum Optics and Quantum Information (IQOQI) of the Austrian Academy of Sciences. “When we want to study another phenomenon, we only need to reprogram our simulator.”

The quantum computer at its best

The Innsbruck physicists use the building blocks of a quantum computer for the simulation. The mathematical description of the phenomenon to be investigated is programmed by using a series of laser pulses to perform a quantum calculation with atoms. Laser-cooled and electrically trapped calcium atoms are used as carriers of quantum bits (qubits). “We encode the desired initial state of the system to be investigated in these qubits and implement the operation sets by laser pulses,“ explains Christian Roos. He and his colleagues have demonstrated this method in two experiments at the IQOQI and the University of Innsbruck using up to 100 gates and 6 qubits. “One of the new scientific results is that interactions and dynamics can be simulated that are not even present in the quantum computer,“ says the enthused Benjamin Lanyon. He is convinced that this will be one of the most promising applications of a future quantum computer. “However, we still need a considerably higher number of quantum bits. This means that we need to be able to control and manipulate considerably more atoms – up to 40 – in the same exact way as we did in our experiment,“ says Lanyon.

Physical phenomena are often described by equations, which may be too complicated to solve. In this case, researchers use computer simulations as a model to investigate open questions. Because this strategy is not feasible even for relatively small quantum systems due to the lack of the processing power of classical computers, the American physicist Richard Feynman proposed to simulate these phenomena in quantum systems experimentally. In 1996 the theorist Seth Lloyd confirmed the feasibility of this approach: Quantum computers can be programmed to efficiently simulate any physical system. A precondition for this approach is to have complete control over the technology and set-up of the simulator. This has already been achieved by Rainer Blatt’s successful research group working on quantum computers over the last few years. Based on this groundwork, the physicists have now been the first to experimentally realize a quantum simulator.

The scientific work published in Science has been supported by the Austrian Science Fund, the European Commission and the Federation of Austrian Industries Tyrol.