Did a black hole eating a star generate a neutrino? 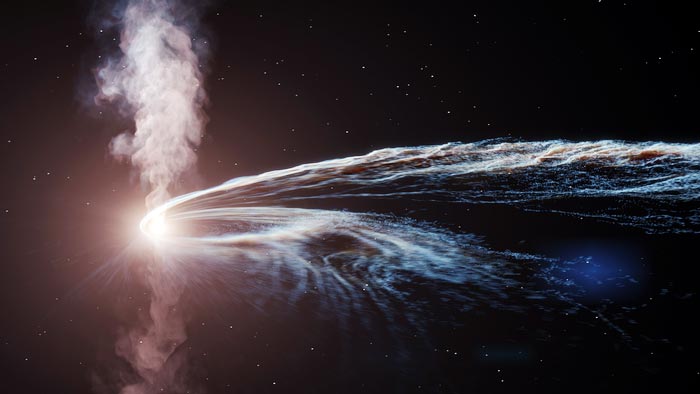 Artist’s illustration of tidal disruption event AT2019dsg where a supermassive black hole spaghettifies and gobbles down a star. Some of the material is not consumed by the black hole and is flung back out into space.
Credit: DESY, Science Communication Lab, License CC BY-NC-SA

New calculations show that a black hole slurping down a star may not have generated enough energy to launch a neutrino.

In October 2019, a high-energy neutrino slammed into Antarctica. The neutrino, which was remarkably hard to detect, peaked astronomers’ interest: what could generate such a powerful particle?

Researchers traced the neutrino back to a supermassive black hole that had just ripped apart and swallowed a star. Known as a tidal disruption event (TDE), AT2019dsg occurred just months earlier — in April 2019 — in the same region of the sky where the neutrino had come from. The monstrously violent event must have been the source of the powerful particle, astronomers said.

But new research casts doubt on that claim.

In a study published this month in the Astrophysical Journal, researchers at the Center for Astrophysics | Harvard & Smithsonian and Northwestern University, present extensive new radio observations and data on AT2019dsg, allowing the team to calculate the energy emitted by the event. The findings show AT2019dsg generated nowhere near the energy needed for the neutrino; in fact, what it spewed out was quite “ordinary,” the team concludes.

While it may seem counterintuitive, black holes do not always swallow everything in reach.

“Black holes are not like vacuum cleaners,” says Yvette Cendes, a postdoctoral fellow at the Center for Astrophysics who led the study.

When a star wanders too close to a black hole, gravitational forces begin to stretch, or spaghettify, the star, Cendes explains. Eventually, the elongated material spirals around the black hole and heats up, creating a flash in the sky that astronomers can spot from millions of light years away.

“But when there’s too much material, black holes can’t eat it all smoothly at once,” says Kate Alexander, a study co-author and postdoctoral fellow at Northwestern University who calls black holes ‘messy eaters.’ “Some of the gas gets spewed back out during this process — like when babies eat, some of the food ends up on the floor or the walls.”

These leftovers get flung back into space in the form of an outflow, or jet — which, if powerful enough, could theoretically generate a subatomic particle known as a neutrino.

An Unlikely Source for Neutrinos

Using the Very Large Array in New Mexico and Atacama Large Millimeter/submillimeter Array (ALMA) in Chile, the team was able to observe AT2019dsg, some 750 million light years away, for more than 500 days after the black hole had started consuming the star. The extensive radio observations make AT2019dsg the most well-studied TDE to date and revealed that the radio brightness peaked around 200 days after the event began.

According to the data, the total amount of energy in the outflow was equivalent to the energy radiated by the Sun over the course of 30 million years. While that may sound impressive, the powerful neutrino spotted on Oct. 1, 2019 would require a source 1,000 times more energetic.

“Instead of seeing the bright jet of material needed for this, we see a fainter radio outflow of material,” Alexander explains. “Instead of a powerful firehose, we see a soft wind.”

Cendes adds, “If this neutrino somehow came from AT2019dsg, it begs the question: Why haven’t we spotted neutrinos associated with supernovae at this distance or closer? They are much more common and have the same energy velocities.”

The team concludes it’s unlikely that the neutrino came from this particular TDE. If it did, however, astronomers are far from understanding TDEs and how they launch neutrinos.

“We’re probably going to check-in on this one again,” says Cendes, who believes there’s still much to learn. “This particular black hole is still feeding.”

TDE AT2019dsg was first discovered on April 9, 2019 by the Zwicky Transient Facility in Southern California. The neutrino, known as IceCube-191001A, was detected by the IceCube Neutrino Observatory in the South Pole six months later.

Additional study co-authors are Edo Berger and Peter Williams of the Center for Astrophysics; Tarraneh Eftekhari of Northwestern University; and Ryan Chornock of the University of California, Berkeley.