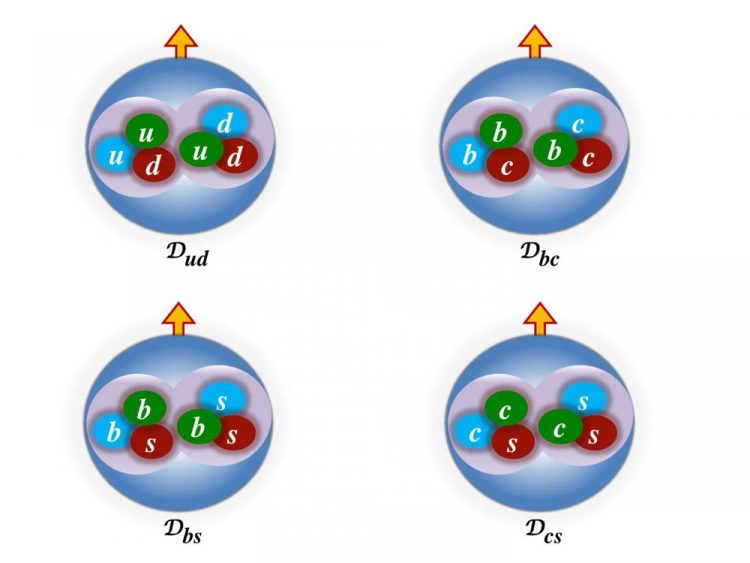 This is a schematic picture of deuteron (D_ud) and other deuteron-like stable nuclei predicted in this study. Credit: Nilmani Mathur

Perhaps you know that this is due to fusion reactions where four nuclei of hydrogen join together to produce a helium nucleus. Such nucleosynthesis processes are possible solely due to the existence, in the first place, of stable deuterons, which are made up of a proton and a neutron.

Probing deeper, one finds that a deuteron consists of six light quarks. Interestingly, the strong interaction between quarks, which brings stability to deuterons, also allows for various other six-quark combinations, leading to the possible formation of many other deuteron-like nuclei. However, no such nuclei, though theoretically speculated about and searched for experimentally many times, have yet been observed.

All this may get changed with an exciting new finding, where, using a state-of-the-art first-principles calculation of lattice quantum chromodynamics (QCD), the basic theory of strong interactions, a definite prediction of the existence of other deuteron-like nuclei has been made by TIFR's physicists.

Using the computational facility of the Indian Lattice Gauge Theory Initiative (ILGTI), Prof. Nilmani Mathur and postdoctoral fellow Parikshit Junnarkar in the Department of Theoretical Physics have predicted a set of exotic nuclei, which are not to be found in the Periodic Table. The masses of these new exotic nuclei have also been calculated precisely.

These new subatomic particles could either be made of six heavy quarks (charm and bottom) or heavy and strange quarks. They are stable against strong and electromagnetic decays, but ? unlike the deuteron ? they can decay through weak interactions. Surprisingly, it is found that the stability of such nuclei increases as they become heavier.

These predictions may aid in discovering these new subatomic particles at experimental facilities. This also opens up the possibility of the existence of many other exotic nuclei, which can be formed through the fusion of heavy baryons, similar to the formation of nuclei of elements in the Periodic Table.

In such reactions, these deuteron-like nuclei could well play the same role as the deuteron in nucleosynthesis. Formation of these new subatomic particles also enhances the possibility of a quark-level analogue of nuclear fusion as discussed recently [Nature 551, 89 (2017)]. Formation of some of these states through fusion is highly exothermic, releasing energy as large as 300 MeV/reaction — an exciting possibility for energy creation some day in the future!

Not only does it require a sophisticated understanding of the quantum field-theoretic issues, but the availability of large-scale computational resources is also crucial. In fact some of the largest scientific computational resources of the world are being utilized by lattice gauge theorists, like those at TIFR, who are trying to solve the mystery of strong interactions of our Universe through their investigations inside the femtoworld (within a scale of about one million-billionth of a meter).

Lattice QCD methods can also play a crucial role in understanding matter under conditions of high temperature and density similar to those in the early stages of the Universe after the Big Bang.