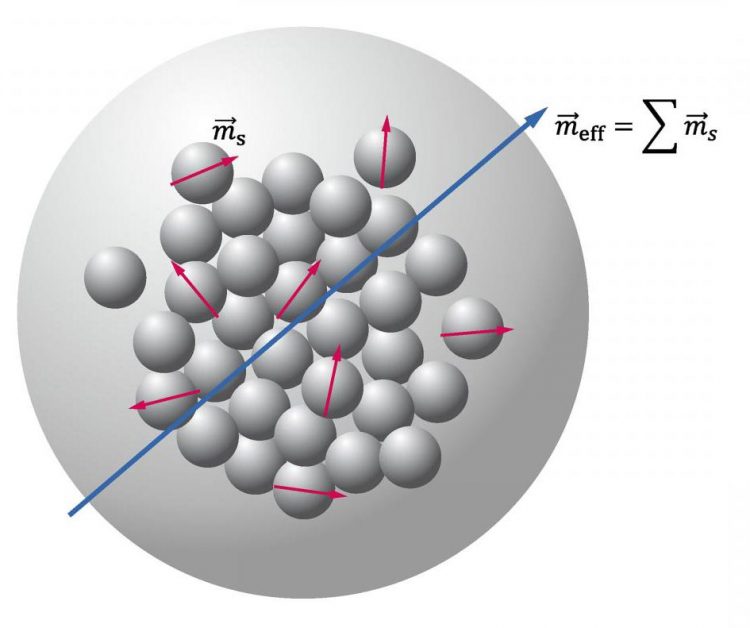 Magnetic nanoparticles, a class of nanoparticles that can be manipulated by magnetic fields, have a wide range of technical and biomedical applications, including magnetic hyperthermia, targeted drug delivery, new magnetic storage media and nanorobots.

Most commercial nanoparticles do not possess a single magnetic core but have a number of small magnetic crystals called crystallites.

The important question for researchers is how these crystallites behave inside a multicore nanoparticle and how they respond to an applied magnetic field. A paper in the Journal of Applied Physics, from AIP Publishing, compares the effective magnetic moments of different multicore nanoparticle systems and shows that they are magnetic-field dependent.

“The effective magnetic moment of such a multicore nanoparticle depends on various parameters, such as the size of magnetic crystallites, their packing density, core configuration and the magnetic interaction between them,” said Frank Ludwig, one of the authors of the paper.

In magnetic drug targeting, the capsule with drugs and magnetic particles is directed to the tumor by magnetic field gradients. When they arrive at the tumor, the drugs are released from the capsule by various techniques. Targeted drug therapy can result in dramatic reduction of doses and side effects versus traditional chemotherapy.

Technical applications of nanoparticles range from new magnetic storage media to nanorobots. Storage media made of nanoparticles are much smaller than existing media and can store greater amounts of data. Nanorobots are machines that can build and manipulate things precisely at an atomic level and can be used in a wide variety of contexts such as miniscule sensors that monitor blood chemistry.

Ludwig said continuing to gain a better understanding of the effective magnetic moment of multicore nanoparticles and, especially, its field dependence is essential for both basic science and applications.

The Journal of Applied Physics is an influential international journal publishing significant new experimental and theoretical results in all areas of applied physics. See https://aip.scitation.org/journal/jap.