Dark matter is a no show in ghostly galaxy 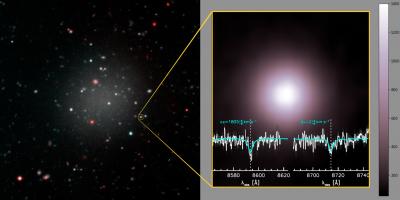 (Left) The ultra-diffuse galaxy is rich with globular clusters, which hold the key to understanding this mysterious object's origin and mass. (Right) A closer look at one of the globular clusters within the galaxy, which are all much brighter than typically seen, with the brightest emitting almost as much light as the brightest globular cluster within the Milky Way. The spectrum, obtained by Keck Observatory, shows the calcium absorption lines used to determine the velocity of this object. 10 clusters were observed, providing the information needed to determine the mass of the galaxy, revealing its lack of dark matter. Credit: W. M. KECK OBSERVATORY/GEMINI OBSERVATORY/NSF/AURA/J. MILLER/J. POLLARD

“Finding a galaxy without dark matter is unexpected because this invisible, mysterious substance is the most dominant aspect of any galaxy,” said lead author Pieter van Dokkum of Yale University. “For decades, we thought that galaxies start their lives as blobs of dark matter. After that everything else happens: gas falls into the dark matter halos, the gas turns into stars, they slowly build up, then you end up with galaxies like the Milky Way. NGC1052-DF2 challenges the standard ideas of how we think galaxies form.”

The research, published in the March 29th issue of the journal Nature, amassed data from Gemini North and W. M. Keck Observatory, both on Maunakea, Hawaii, the Hubble Space Telescope, and other telescopes around the world.

Given its large size and faint appearance, astronomers classify NGC1052-DF2 as an ultra-diffuse galaxy, a relatively new type of galaxy that was first discovered in 2015. These barely visible galaxies are surprisingly common. However, no other galaxy of this type yet-discovered is so lacking in dark matter.

“NGC 1052-DF2 is an oddity, even among this unusual class of galaxy,” said Shany Danieli, a Yale University graduate student on the team.

Van Dokkum and his team first spotted NGC1052-DF2 with the Dragonfly Telephoto Array, a custom-built telescope in New Mexico that they designed to find these ghostly galaxies. NGC1052-DF2 stood out in stark contrast when comparisons were made between images from the Dragonfly Telephoto Array and the Sloan Digital Sky Survey (SDSS). The Dragonfly images show a faint “blob-like” object, while SDSS data reveal a collection of relatively bright point-like sources.

To get a closer look at this inconsistency, the team dissected the light from several of the bright sources within NGC1052-DF2 using Keck Observatory's Deep Imaging Multi-Object Spectrograph (DEIMOS) and Low-Resolution Imaging Spectrometer (LRIS), identifying 10 globular clusters. These clusters are large compact groups of stars that orbit the galactic core.

The spectral data obtained on the Keck telescopes revealed that the globular clusters were moving much slower than expected. The slower the objects in a system move, the less mass there is in that system. The team's calculations show that all of the mass in the galaxy could be attributed to the mass of the stars, which means there is almost no dark matter in NGC1052-DF2.

“If there is any dark matter at all, it's very little,” van Dokkum explained. “The stars in the galaxy can account for all of the mass, and there doesn't seem to be any room for dark matter.”

“Keck is in a very small group of telescopes that could even attempt these observations, because you need a large telescope to measure these accurate velocities,” van Dokkum added. “Keck also has some of the best spectrographs in the world for measuring the velocities of faint objects. We had the opportunity to check and make sure we got the same result within the uncertainties, and that gave us confidence that we were doing things right.”

To peer even deeper into this unique galaxy, the team used the Gemini-North Multi Object Spectrograph (GMOS) to capture detailed images of NGC1052-DF2, assess its structure, and confirm that the galaxy had no signs of interactions with other galaxies.

“Without the Gemini images dissecting the galaxy's morphology we would have lacked context for the rest of the data,” said Danieli. “Also, Gemini's confirmation that NGC1052-DF2 is not currently interacting with another galaxy will help us answer questions about the conditions surrounding its birth.”

The team's results demonstrate that dark matter is separable from galaxies.

“This discovery shows that dark matter is real – it has its own separate existence apart from other components of galaxies,” said van Dokkum.

NGC1052-DF2's globular clusters and atypical structure has perplexed astronomers aiming to determine the conditions this galaxy formed under.

“It's like you take a galaxy and you only have the stellar halo and globular clusters, and it somehow forgot to make everything else,” van Dokkum said. “There is no theory that predicted these types of galaxies. The galaxy is a complete mystery, as everything about it is strange. How you actually go about forming one of these things is completely unknown.”

However, researchers do have some ideas. NGC1052-DF2 resides about 65 million light years away in a collection of galaxies that is dominated by the giant elliptical galaxy NGC 1052. Galaxy formation is turbulent and violent, and van Dokkum suggests that the growth of the fledgling massive galaxy billions of years ago perhaps played a role in NGC1052-DF2's dark-matter deficiency.

Another idea is that a cataclysmic event within the oddball galaxy, such as the birth of myriad massive stars, swept out all the gas and dark matter, halting star formation.

These possibilities are speculative, however, and don't explain all of the characteristics of the observed galaxy, the researchers said.

The team continues the hunt for more dark-matter-deficient galaxies. They are analyzing Hubble images of 23 other diffuse galaxies. Three of them appear to share similarities with NGC1052-DF2, which van Dokkum plans to follow up on in the coming months at Keck Observatory.

“Every galaxy we knew about before has dark matter and they all fall in familiar categories like spiral or elliptical galaxies,” van Dokkum said. “But what would you get if there were no dark matter at all? Maybe this is what you would get.”

The DEep Imaging and Multi-Object Spectrograph (DEIMOS) boasts the largest field of view (16.7arcmin by 5 arcmin) of any of the Keck Observatory instruments, and the largest number of pixels (64 Mpix). It is used primarily in its multi-object mode, obtaining simultaneous spectra of up to 130 galaxies or stars. Astronomers study fields of distant galaxies with DEIMOS, efficiently probing the most distant corners of the universe with high sensitivity. Support for DEIMOS was generously provided by the National Science Foundation.

The Low Resolution Imaging Spectrometer (LRIS) is a faint-light instrument capable of taking spectra and images of the most distant known objects in the universe. The instrument is equipped with a red arm and a blue arm to explore stellar populations of distant galaxies, active galactic nuclei, galactic clusters, and quasars. LRIS was used in observing distant supernovae by astronomers who received the Nobel Prize in Physics in 2011 for research determining that the universe was speeding up in its expansion. Support for LRIS was generously provided by Friends of Keck, including Change Happens Foundation and Mt. Cuba Astronomical Foundation.

The W. M. Keck Observatory telescopes are among the most scientifically productive on Earth. The two, 10-meter optical/infrared telescopes on the summit of Maunakea on the Island of Hawaii feature a suite of advanced instruments including imagers, multi-object spectrographs, high-resolution spectrographs, integral-field spectrometers, and world-leading laser guide star adaptive optics systems.

Some of the data presented herein were obtained at Keck Observatory, which is a private 501(c) 3 non-profit organization operated as a scientific partnership among the California Institute of Technology, the University of California, and the National Aeronautics and Space Administration. The Observatory was made possible by the generous financial support of the W. M. Keck Foundation.

The authors wish to recognize and acknowledge the very significant cultural role and reverence that the summit of Maunakea has always had within the indigenous Hawaiian community. We are most fortunate to have the opportunity to conduct observations from this mountain.