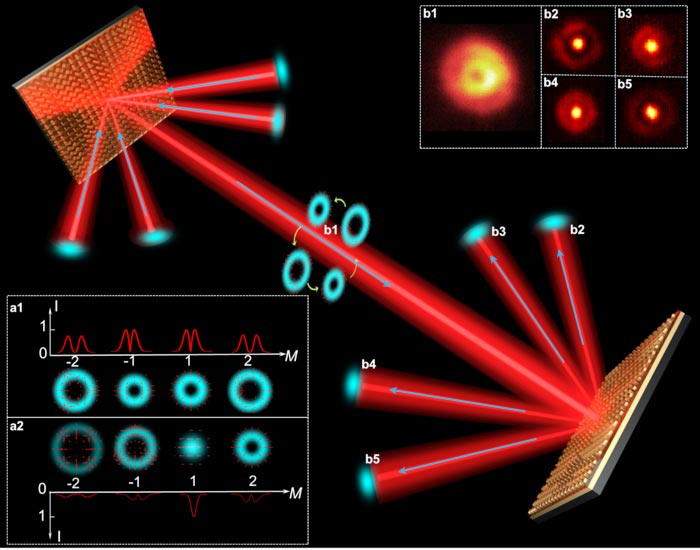 Cylindrical vector beam (CVB) multiplexing has emerged as a powerful technique to boost signal channels. Coupling and separating CVBs are two pivotal elements in CVB multiplexing communication. Although off-axis control technologies, such as miniature Dammann vortex gratings, have been investigated to couple and separate light beams, it is usually limited to light beams with homogeneous polarization due to its phase-only grating structure.

For CVBs with inhomogeneous polarization, a gradient phase device is required to create a gradient phase difference between the left- and right-handed circularly polarized (LHCP/RHCP) components, so that the CVBs with off-axis incident angles can coaxially propagate and carry different phase structures. Despite considerable efforts of off-axis control technologies, the off-axis polarization control of CVBs still remains a challenge.

According to Jones matrix analysis, CVB can be obtained by linearly superposing two orthogonal circularly polarized vortex beams with conjugate topological charges. After decomposed into LHCP and RHCP components, CVBs can be off-axis controlled by independently modulating the phase of these two components, and thus the mode coupling and separating can be achieved via introducing gradient phase changes. Optical metasurface is a kind of micro-nano optical device, which is capable of phase, amplitude, and polarization control by arranging the artificial nanoantenna. It shows that the metasurface enables circular polarization-dependent phase modulation by the spin-orbit interaction, which provides a route for independently phase control of two circularly polarized components.

Light Science & Application reports a new work from a team of scientists, led by Professors Dianyuan Fan, Xiaocong Yuan and Ying Li from Shenzhen University, China and co-workers. They have proposed an approach to realize off-axis polarization control for CVB multiplexing/demultiplexing based on a metal-dielectric-metal metasurface. The LHCP and RHCP components of CVBs were independently modulated via spin-to-orbit interactions by the properly designed metasurface, and then simultaneously multiplexed and demultiplexed due to the reversibility of light path and the conservation of vector mode.

Amplified signal and extreme sensitivity: on the trail of light dark matter particles