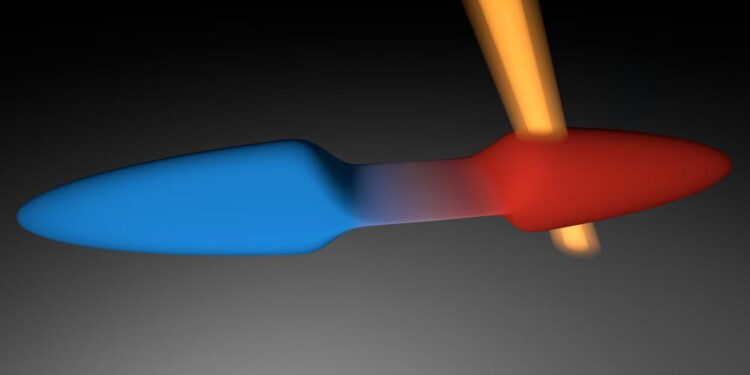 Artistic impression of the experiment in which Häusler and colleagues first heat one of two quantum-​gas clouds and then connect them with a two-​dimensional channel, such that they can equilibrate.
(Graphics: D. Husmann & S. Häusler, ETH Zurich)

Physicists at ETH Zurich demonstrate that a tiny cloud of atoms can be turned from a heat engine into a cooler by cranking up the interactions between the particles.

When a piece of conducting material is heated up at one of its ends, a voltage difference can build up across the sample, which in turn can be converted into a current. This is the so-called Seebeck effect, the cornerstone of thermoelectric effects. In particular, the effect provides a route to creating work out of a temperature difference. Such thermoelectric engines do not have any movable part and are therefore convenient power sources in various applications, including propelling NASA’s Mars rover Perseverance.

The Seebeck effect is interesting for fundamental physics, too, as the magnitude and sign of the induced thermoelectric current is characteristic of the material and indicates how entropy and charge currents are coupled. Writing in Physical Review X, the group of Prof. Tilman Esslinger at the Department of Physics of ETH Zurich now reports on the controlled reversal of such a current by changing the interaction strength among the constituents of a quantum simulator made of extremely cold atoms trapped in shaped laser fields. The capability to induce such a reversal means that the system can be turned from a thermoelectric engine into a cooler.

The experiment, conducted by doctoral researcher Samuel Häusler and co-workers in the Esslinger group, starts with a cloud of fermionic Lithium atoms that are cooled to temperatures low enough that quantum effects determine the behaviour of the ensemble. The cloud is then separated into two independent halves of equal atom number. One of them is heated, before the two reservoirs are connected by a two-dimensional channel.

The equilibrium state that thus develops is as expected: after a sufficiently long time, the two halves contain equal atom numbers at equal temperatures. More interesting is the transient behaviour. During the equilibration process, the atom number in each reservoir changes, with the atoms ebbing and flowing between them. In which direction and with what amplitude this happens depends on the thermoelectric properties of the system.

Thanks to the exquisite control over the system, the researchers were able to measure the transient behaviours for different interaction strengths and atomic densities inside the channel and compared them to a simple model. In contrast to solid-state systems, where most thermoelectric properties can be measured in simple, well-defined experiments, in these small clouds of atoms the parameters are inferred from fundamental quantities such as the atom density. Finding a procedure that properly extracts the thermoelectric quantities over a wide range of parameters was a key point of the work.

The team found that the current direction results from a competition between two effects (see the figure). On the one hand (left), the thermodynamic properties of the reservoirs favour the increase of atom number in the hot reservoir, to equilibrate the chemical potentials of the two halves. On the other hand (right), the properties of the channel typically make the transport of hot, energetic particles easier — because they have a large number of possible pathways (or, modes) available to them — leading to an increase of the atom number in the cold reservoir.

With a non-interacting gas, it is possible to compute the dominating trend between the two competing effects once the precise shape of the atom cloud is known and taken into account. In the system of Häusler et al. this can be done very accurately. Both in the computation and in the measurements, the initial atom current flows from the hot to the cold reservoir and is stronger for low atomic densities in the channel. When the interactions are tuned up to the so-called unitary regime, the behaviour of the system becomes considerably more difficult to predict. The computation becomes intractable without wide-ranging approximations, due to the strong correlations that build up in the gas.

In this regime, the quantum simulation device of the ETH researchers showed that for high-enough mean temperature and low atom density in the channel, the current also flows from the hot to the cold reservoir. However, it can be reversed when the channel density is increased using an attractive gate potential. Above a certain density threshold, the atoms in the channel undergo a phase transition where they form pairs showing superfluid behaviour. This superfluid region in the channel limits the transport of unpaired, energetic particles, favouring the transport from the cold to the hot reservoir and hence the reversal of the thermoelectric current.

Towards better thermoelectric materials thanks to interactions

Understanding the properties of matter through thermoelectric measurement improves the fundamental understanding of interacting quantum systems. Equally important is to identify new ways to design well-performing thermoelectric materials that could efficiently transform small heat differences into work or, if used in reverse mode, act as a cooling device (known as a Peltier cooler).

The efficiency of a thermoelectric material is characterized by the thermoelectric figure of merit. Häusler et al. have measured a strong enhancement of the value of this figure when cranking up the interactions. While this enhancement cannot be directly translated into material science, this excellent cooling capability could already be used to reach lower temperatures for atomic gases, which in turn might enable a broad range of novel fundamental experiments in quantum science.