Correlated magnets made out of single atoms 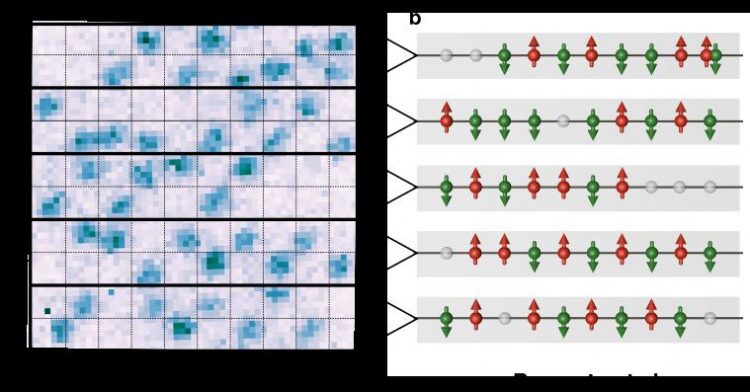 Solid state physics offers a rich variety of intriguing phenomena, several of which are not yet fully understood. Experiments with fermionic atoms in optical lattices get very close to imitating the behaviour of electrons in solid state crystals, thus forming a well-controlled quantum simulator for these systems.

Now a team of scientists around Professor Immanuel Bloch and Dr. Christian Groß at the Max Planck Institute of Quantum Optics have observed the emergence of antiferromagnetic order over a correlation length of several lattice sites in a chain of fermionic atoms. Contrary to the ferromagnetism we experience in everyday life, these antiferromagnets are characterized by an alternating alignment of the elementary magnetic moment associated with each electron or atom.

Combining their quantum gas microscope with advanced local manipulation techniques, the scientists were able to simultaneously observe the spin and the density distribution with single-site resolution and single atom sensitivity. By approaching the conditions prevailing in macroscopic crystals with fermionic quantum many-body systems, one hopes to achieve a better understanding of phenomena such as the so-called high-temperature superconductivity. (Science, 16 September 2016, DOI:10.1126/science.aag1635).

The experiment started with cooling a cloud of fermionic lithium-6 atoms down to extremely low temperatures, a millionth of a Kelvin above absolute zero. These ultracold fermions were then trapped by light fields and forced into a single plane, which in turn was further split in several one-dimensional tubes. Finally, an optical lattice was applied along the tubes mimicking the periodic potential that electrons see in a real material.

On average, the one-dimensional optical lattices were completely filled, meaning that each lattice site was occupied with exactly one atom. Two internal quantum states of the lithium atoms mimic the magnetic moment of the electrons, which can point either upwards or downwards. As long as the temperature of the system is high compared to the magnetic interaction between these spins, only the density distribution of the system shows a regular pattern dictated by the optical lattice. However, below a certain temperature the magnetic moments of neighbouring atoms are expected to anti-align, leading to antiferromagenic correlations. “These correlations arise because the system aims to lower its energy”, Martin Boll, doctoral student at the experiment, explains. “The underlying mechanism is called “superexchange” which means that the magnetic moments of neighbouring atoms exchange their directions.”

The team around Christian Groß and Immanuel Bloch had to tackle two main challenges: First, it was necessary to measure the particle density with high resolution to unambiguously identify single particles and holes on their individual lattice sites. This was achieved with the quantum gas microscope where a high resolution objective images the atoms all at once, such that a series of photographic snapshots of the atomic gas can be taken. “The second really big challenge was the separation of atoms based on their magnetic orientations”, says Martin Boll. “To this end, we combined an optical superlattice with a magnetic gradient that shifted the potential minima depending on the orientation of the magnetic moment. As a consequence, opposite magnetic moments were separated into two different sites of the local double well potential created by the superlattice. In a series of measurements we have tuned this method to such a degree that we obtained a splitting fidelity of nearly 100 percent.”

Having all these tools at hand, the team succeeded to observe the emergence of antiferromagnetic correlations that extended over three sites, well beyond nearest-neighbours (see figure 1). “Quantum simulations with fermions in optical lattices is of particular interest because it may lead to a better understanding of the so-called “high-temperature” superconductivity for which the interplay of holes and antiferromagnetic correlations is believed to be crucial.”, Dr. Christian Groß points out. “In the near future, we might be able to even prepare our samples with a certain degree of hole-doping that resembles the conditions in superconducting materials.” Olivia Meyer-Streng