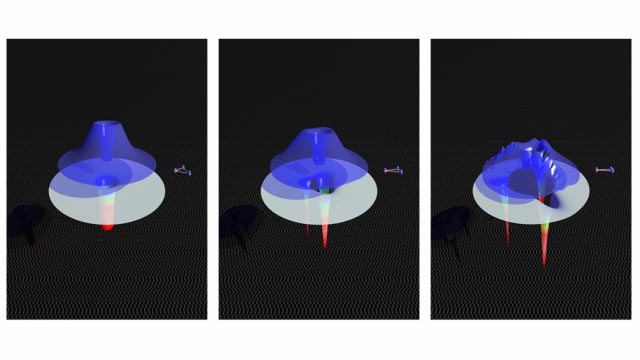 Figure 1. Three panels illustrate the condition of Efimov states (3-atom stable states). The upper, bell-shaped surface represents the probability density for each of the three geometries, while the gray surface represents the strength of the van der Waals force for that geometry. Left panel: the three interacting atoms lie in an equilateral triangle formation. Middle panel: two of the atoms are rather closer together than to the third atom. Right panel: the geometry of the middle panel but with the atoms lying farther apart from each other. The dimples in the probability density surface reflect the more complicated interaction when two of the atoms are close together.Credit JQI/Yujun

Chemical reactions drive the mechanisms of life as well as a million other natural processes on earth. These reactions occur at a wide spectrum of temperatures, from those prevailing at the chilly polar icecaps to those at work churning near the earth’s core.

At nanokelvin temperatures, by contrast, nothing was supposed to happen. Chemistry was expected to freeze up. Experiments and theoretical work have now show that this is not true. Even at conditions close to absolute zero atoms can interact and manage to form chemical bonds.

Within this science of ultracold chemistry, there is a sub-field that deals with “Efimov states,” named for Russian physicist Vitaly Efimov. In 1970 he predicted that under some conditions all two-particle bound states would be unstable while (paradoxically) some three-particle states could exist. Such states were eventually seen experimentally in 2006, among cesium atoms (see Related JQI Article below).

Two scientists at the Joint Quantum Institute have now formulated a universal theory to describe the properties of these Efimov states, a theory that, for the first time, does not need extra adjustable unknown parameters . This should allow physicists to predict the rates of chemical processes involving three atoms—or even more—using only a knowledge of the interaction forces at work.

The JQI authors, Yujun Wang and Paul Julienne, publish their results in the journal Nature Physics (see Reference Publication below).

Efimov states are fragile. They depend for their existence on quantum effects and on the subtle interplay of two phenomena: Feshbach resonance and van der Waal forces. Quantum effects are necessarily at work at ultracold temperatures in the nano-kelvin regime. Here atoms should be viewed not as hard balls, typically a few tenths of nanometers across, but as wave packets, blobs extending over hundreds of nm.

It is common, when talking about colliding particles, to see them as cars speeding toward each other, perhaps meeting head on or glancing off at a relative angle. It is more unusual to visualize the collision if the “particles” are so large as to overlap each other at relatively great distances. More strange still if three such particles are involved in an interaction whose result will be a loosely-bound confederation.

In the study of Efimov states, the primary force at work among the atoms is the van der Waals force, named for Dutch physicist Johannes Diderik van der Waals. This long-range force among atoms or molecules arises from the temporary appearance of electric dipole moments in the particles.

Even for a neutral atom, a momentary imbalance of charge—more of the atomic electrons’ negative charge might appear to the left, say, leaving a positive preponderance on the right—will constitute an electric dipole, which in turn can attract an atom with a complementary dipole orientation. This induced-dipole force varies at the inverse sixth power of the distance between the two particles.

Another way of controlling inter-particle collisions at ultracold temperatures is to turn on an external magnetic field. For certain ranges of field strength, two particles can be coaxed to form semi-stable objects called Feshbach resonances, named for US physicist Herman Feshbach. Feshbach resonances are commonly used in cold-physics to control interactions, and this is especially true in the study of Efimov states.

Often Feshbach resonances are described in terms of a parameter, a, called the scattering length, denoting the effective distance over which the interaction takes place If a is positive and large (much larger than the nominal range of the force between the atoms), weak binding of atoms can happen. If a is negative, a slight attraction of two atoms can occur but not binding. If, however, a is large and three atoms are present, then the Efimov state can appear. Indeed an infinite number of such states can occur.

In general since it allows interactions over large distances, the Feshbach effect is more important than the van der Waals force. But the JQI research has shown how the van der Waals force can be decisive in forming Efimov states, especially when the scattering length is short. Many scientists had believed that making consistent predictions of triplet-forming interactions would be difficult to make. Instead, the Wang-Julienne model successfully incorporates this short-distance regime.

Thus there should be a series of Efimov states, with various binding energies. But unlike atoms, where the quantum energy levels (denoting how much energy is needed to liberate the electron from its atomic binding) are in the electron volt (eV) range, Efimof states are typified by quantum energies of billionths of an eV or less.

Wang and Julienne build their theory of 3-body van der Waals physics around the Schrödinger equation, the equation introduced by Erwin Schrödinger in the 1920s to treat particles as waves. Only here it is three particles—viewed as three sets of waves, or rather as a complex of waves representing the three particles—carefully studied in pairwise fashion to simulate an effective composite force field in which the three particles operate.

The result is a theoretical tool that can predict the important Efimov properties, namely the energies of the Efimov states, the widths of those states (essentially the fuzziness of our knowledge of the precise energy value), and the rates at which the three-particle states will form inside a gas of ultracold atoms.

“Our theory works for a full range of scattering lengths,” said Yujun Wang describing the JQI work, “whereas the previous theories could only apply to large scattering lengths. We don't need adjustable parameters. The only inputs in our theory are the known two-body Feshbach parameters and our calculations using the Schrodinger equation. So our theory does not rely on any of the unknown three-body inputs that have been used in previous theories to fit the experimental data. In these two aspects our theory is more comprehensive and powerful. We can make quantitative predictions without relying on the unknowns, so that our results can be directly compared to experiments.”