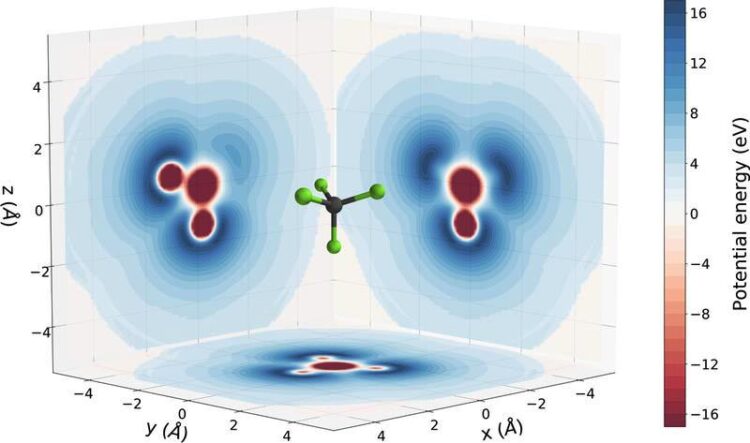 Study shows how the mechanism of photoionization can be used to gain insights into complex molecular potentials.

How can researchers use the mechanism of photoionization to gain insight into complex molecular potential? This question has now been answered by a team led by Prof. Dr. Giuseppe Sansone from the Institute of Physics at the University of Freiburg. The researchers from Freiburg, the Max Planck Institute for Nuclear Physics in Heidelberg and groups at the Universidad Autonoma in Madrid/Spain and the University of Trieste/Italy have published their results in the journal Nature Communications.

In the origin of photoionization, also called the photoelectric effect, an atom or molecule absorbs one quantum of light, usually indicated as photon, from an external field. The energy absorbed in this process is transferred to an electron, which is freed, leaving behind a singly charged ion. In several aspects and for several applications, the effect can be regarded as instantaneous, meaning that there is no significant time delay between the absorption of the photon and the instant when the electron is emitted. However, several experiments conducted in the last years have evidenced that tiny, but measurable delays lying in the attosecond range (1 as=10-18 s) occur between these two processes.

“Thanks to the advanced laser sources and specially designed spectrometers available in our laboratory, we can generate the shortest bursts of light, lasting only few hundreds of attoseconds,” Sansone explains. “Moreover, we can reconstruct the orientation of simple molecules when they absorb a photon from an external laser pulse. We have used such pulses to investigate the motion of the electrons after the absorption of a photon.”

The researchers found that on its way out from the molecule, the electron experiences a complex landscape characterized by potential peaks and valleys. These are determined by the spatial distribution of the atoms composing the system. The path followed by the electron during its motion can affect the time it takes to be freed.

In the experiment, the team measured the time delays accumulated by the electrons emitted from CF4 molecules in different spatial directions were measured using an attosecond pulse train combined with an ultrashort infrared field. “Combining this information with the characterization of the spatial orientation of the molecule, we can understand how the potential landscape and, in particular, potential peaks affect the time delay”,” says the Freiburg physicist.

The work can be extended to more complex molecular systems and to potentials changing on ultrashort timescales. In general, Sansone emphasizes, this approach could give the possibility to map complex potential landscapes from within, with unprecedented temporal resolution.

Caption:
Potential landscape of a CF4 molecule, in which a central carbon atom (gray) is surrounded by four fluorine atoms (green) positioned at the vertices of a tetrahedron. The three projections are cuts of the molecular potential, with the blue and red regions indicating points of positive and negative potential energy, respectively. Credit: AG Sansone