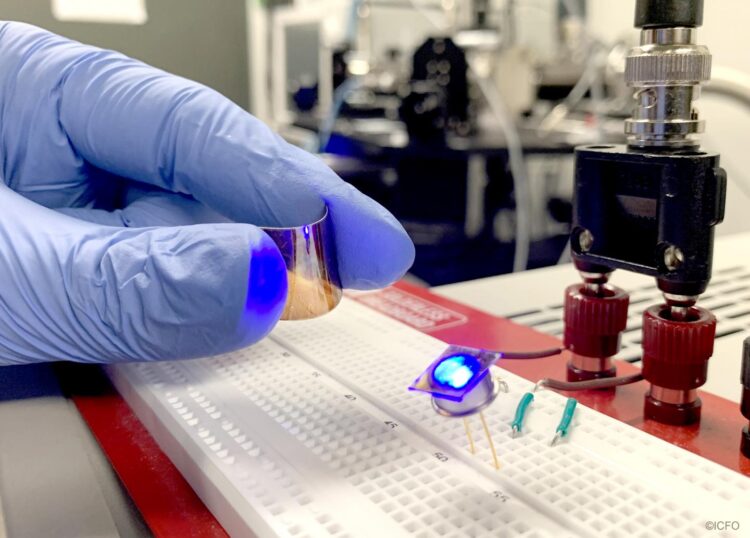 The multi-stack of CQDs of different size are built on top of a flexible plastic substrate that is later deposited onto a commercial visible LED to produce broadband IR light. Image credit: ©ICFO

Broadband light emission in the infrared has proven to be of paramount importance for a large range of applications that include food quality and product/process monitoring, recycling, environmental sensing and monitoring, multispectral imaging in automotive as well as safety and security. With the advent of IoT and the increasing demand in adding more functionalities to portable devices (such as smart watches, mobile phones etc.) the introduction of on-chip spectrometers for health monitoring, allergen detection food quality inspection, to name a few, is expected to happen soon.

But in order to have such functionalities easily integrated and implemented in mass production consumer electronics, several prerequisites need to be met. More specifically, the light source needs to be compact, highly efficient and ideally CMOS integrated to guarantee low-cost and high volume manufacturing.

So far, broadband light emitters in the shortwave infrared (a portion of the infrared spectrum between 1 – 2.5 um) range in which these aforementioned applications work, are based on previous-century technology, which is actually based on incandescent light sources, i.e. black body radiators. Even though their cost of production is low, their functionality is based on the principle of heating, which does not allow miniaturization of those sources, ending up in bulky form factors.

Furthermore heat dissipation becomes a major issue when it comes to integration in compact portable systems. What makes matters even worse is the fact that these sources are uncontrollably broadband, emitting across a spectrum that is far broader than usually needed, which means that they are highly inefficient since most of the generated light is essentially useless.

To address this challenge, ICFO researchers Dr. Santanu Pradhan and Dr. Mariona Dalmases led by ICREA Prof. at ICFO Gerasimos Konstantatos, developed a new class of broadband solid state light emitters based on colloidal quantum dot (CQD) thin film technology. The results of their study have been published in the journal Advanced Materials.

Now, CQDs offer the advantages of low-cost solution processability, easy CMOS integration and a readily tunable bandgap. By leveraging these properties, ICFO researchers designed and engineered a multi-stack of CQDs of different size, which showed to be capable of emitting light with a spectrum that depends on the size of the emitting QDs. The sequence and thickness of the layers was optimized to maximize the photoconversion efficiency of this down-converting nanophosphor type of thin film.

The stacks were built on top of a flexible plastic substrate which was then glued on top of a LED that emits in the visible range. This LED emits visible light that is then absorbed and converted by the CQDs to infrared light with a desired spectrum and, more importantly, with an outstanding photon conversion efficiency of 25%. They showed that the shape of the emission spectrum can be tuned by choosing the appropriate populations of CQD sizes. For this particular case, the researchers developed a broadband light source covering an emission range between 1100 – 1700 nm with a FWHM of 400 nm.

Then, by exploiting the conductive nature of the CQD thin films, the researchers were able to take a step further in their experiment and also construct electrically driven active broadband LEDs with a FWHM in excess of 350 nm and quantum efficiency of 5%. Such achievement represents the first monolithic electrically driven broadband Short Wave Infrared (SWIR) LED that does not need to rely on external light sources for excitation.

This is a remarkable discovery since current available technologies based on III-V semiconductors not only are CMOS incompatible, but also require the use of multiple InGaAs chips in the form of an array to deliver a broadband spectrum, which adds complexity, cost and device volume increase.

Finally, to demonstrate how suitable this technology could be for market applications based on spectroscopy techniques, the team of researchers searched for several real case examples that could be good candidates for such technology. They took their CQD light source setup and by putting it together with commercially available spectrometers, they were able to distinguish between different types of plastics, liquids and milks that have distinct spectral signatures in the SWIR. The successful results open a new realm for the field of SWIR spectroscopy since they prove that this technology could definitely be used for applications that range from plastic sorting in recycling process, to health and safety or even food inspection, to name a few.

ICFO was founded by the Government of Catalonia and the Universitat Politècnica de Catalunya (UPC), both of which are members of its board of trustees along with the Cellex and Mir-Puig Foundations, philanthropic entities that have played a critical role in the advancement of the institute. Located in the Mediterranean Technology Park in the metropolitan area of Barcelona, the institute currently hosts 400 people, organized in 25 research groups in 60 state-of-the-art research laboratories. Research lines encompass diverse areas in which photonics plays a decisive role, with an emphasis on basic and applied themes relevant to medicine and biology, advanced imaging techniques, information technologies, a range of environmental sensors, tunable and ultra-fast lasers, quantum science, photovoltaics and the properties and applications of nano-materials such as graphene, among others. In addition to three state awarded Severo Ochoa accreditations of excellence, ICFOnians have secured 15 ICREA Professorships and 37 European Research Council grants. ICFO is proactive in fostering entrepreneurial activities, spin-off creation, and creating collaborations and links between industry and ICFO researchers. To date, ICFO has helped create 8 start-up companies.