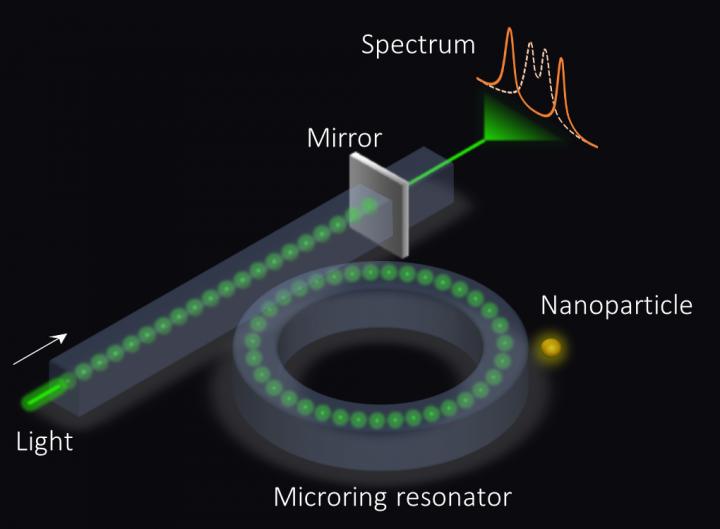 An exceptional surface-based sensor. The microring resonator is coupled to a waveguide with an end mirror that partially reflects light, which in turn enhances the sensitivity. Credit: Ramy El-Ganainy and Qi Zhong

While this works well at the macroscopic level, measuring tiny, microscopic quantities that induce weak response is a challenging task. Researchers have developed techniques to overcome this difficulty and improve the sensitivity of their devices. Some of these techniques, which rely on complex quantum optics concepts and implementations, have indeed proved useful, such as in sensing gravitational waves in the LIGO project. Others, which are based on trapping light in tiny boxes called optical resonators, have succeeded in detecting micro-particles and relatively large biological components.

Nonetheless, the ability to detect small nano-particles and eventually single molecules remains a challenge. Current attempts focus on a special type of light trapping devices called microring or microtoroid resonators — these enhance the interaction between light and the molecule to be detected. The sensitivity of these devices, however, is limited by their fundamental physics.

In their article “Sensing with Exceptional Surfaces in Order to Combine Sensitivity with Robustness” published in Physical Review Letters (DOI: https://doi.org/10.1103/PhysRevLett.122.153902), physicists and engineers from Michigan Technological University, Pennsylvania State University and the University of Central Florida propose a new type of sensor. They are based on the new notion of exceptional surfaces: surfaces that consist of exceptional points.

In order to understand the meaning of exceptional points, consider an imaginary violin with only two strings. In general, such a violin can produce just two different tones — a situation that corresponds to a conventional optical resonator. If the vibration of one string can alter the vibration of the other string in a way that the sound and the elastic oscillations create only one tone and one collective string motion, the system has an exceptional point.

A physical system that exhibits an exceptional point is very fragile. In other words, any small perturbation will dramatically alter its behavior. The feature makes the system highly sensitive to tiny signals.

“Our current proposal alleviates most of these problems by introducing a new system that has the same enhanced sensitivity reported in previous work, while at the same time robust against the majority of the uncontrivable experimental uncertainty,” said Qi Zhong, lead author on the paper and a graduate student who is currently working towards his doctorate degree at Michigan Tech.

Though the design of microring sensors continues to be refined, researchers are hopeful that by improving the devices, seemingly tiny optical observations will have large effects.