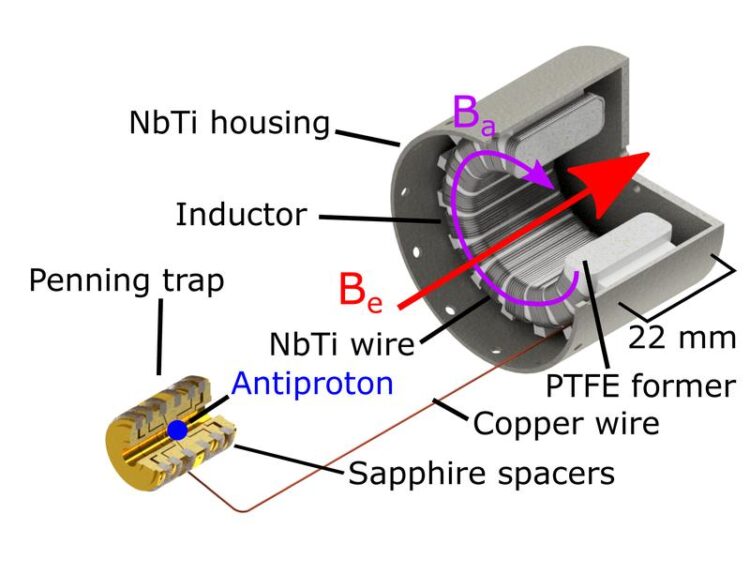 The Baryon Antibaryon Symmetry Experiment (BASE) at CERN’s Antimatter Factory has set new limits on the mass of axion-like particles – hypothetical particles that are candidates for dark matter – and constrained how easily they can turn into photons, the particles of light. This is especially significant as BASE was not designed for such studies. The experiment’s new result, published by Physical Review Letters, describes this pioneering method and opens up new experimental possibilities in the search for cold dark matter.

“BASE has extremely sensitive tuned circuit detection systems to study the properties of single trapped antiprotons. We realized that these detectors can also be used to search for signals of other particles. In this recently published work we used one of our detectors as an antenna to search for a new type of axion-like particles,” explains Jack Devlin, a CERN research fellow working on the experiment.

Axions or axion-like particles are candidates for cold dark matter. From astrophysical observations, we believe that around 26.8 percent of the matter-energy content of the Universe is made up of dark matter and only about 5 percent of ordinary – visible – matter; the remainder is the mysterious dark energy. These unknown particles feel the force of gravity, but they barely respond to the other fundamental forces, if they experience these at all. The best accepted theory of fundamental forces and particles, called the Standard Model of particle physics, does not contain any particles which have the right properties to be cold dark matter. However, since the Standard Model leaves many questions unanswered, physicists have proposed theories that go beyond, some of which explain the nature of dark matter. Among such theories are those that suggest the existence of axions or axion-like particles. These theories need to be tested and there are many experiments set up around the world to look for these particles. For the first time, the BASE experiment at CERN has turned the tools developed to detect single antiprotons to the search for dark matter.

Compared to the large detectors installed in the LHC, BASE is a much smaller experiment. It is connected to CERN’s Antiproton Decelerator, which supplies the experiment with antiprotons. BASE captures and suspends these particles in a Penning trap, a combination of electric and strong magnetic fields. To avoid collisions with ordinary matter, the trap is operated at 5 Kelvin (~−268 °C) where exceedingly low pressures, similar to those in deep space are reached (10−18 mbar). In this extremely well-isolated environment, clouds of trapped antiprotons can exist for years at a time. By carefully adjusting the electric fields, the physicists at BASE can isolate individual antiprotons and move them to a separate part of the trap. In this region, very sensitive superconducting resonant detectors can pick up the tiny electrical currents generated by single antiprotons as they move around the trap.

In the now published work, the BASE team looked for unexpected electrical signals in their sensitive antiproton detectors. At the heart of each detector is a small, approximately 4cm diameter, donut-shaped coil, which looks similar to the inductors you might find in many ordinary electronics. However, the BASE detectors are superconducting and have almost no electrical resistance, and all the surrounding components are carefully chosen so that they do not cause electrical losses. This makes the BASE detectors extremely sensitive to any small electrical fields. Physicists used the antiproton as a quantum sensor to precisely calibrate the background noise on their detector. They then began to search for unusual signals, however faint, that could hint at those induced by axion-like particles and their possible interactions with photons. Nothing was found at the frequencies that were recorded, which means that BASE succeeded in setting new limits for the mass of axion-like particles and in investigating their possible interactions with photons.

With this study, BASE opens up possibilities for other Penning trap experiments to participate in the search for dark matter. Since BASE was not built to look for these signals, several changes could be made to improve the probability of finding an axion-like particle in the future. “With this new technique, we’ve combined two previously unrelated branches of experimental physics: axion physics and high-precision Penning trap physics. Our laboratory experiment is complementary to astrophysics experiments and especially very sensitive in the low axion mass range. With a purpose-built instrument we would be able to increase the bandwidth and sensitivity to broaden the landscape of axion searches using Penning trap techniques,” says Stefan Ulmer, spokesperson for the BASE experiment collaboration.

The BASE collaboration consists of scientists from RIKEN Fundamental Symmetries Laboratory, the European Center for Nuclear Research (CERN), the Max Planck Institute for Nuclear Physics (MPIK) in Heidelberg, the Johannes Gutenberg University Mainz (JGU), the Helmholtz Institute Mainz (HIM), the University of Tokyo, the GSI Helmholtzzentrum für Schwerionenforschung in Darmstadt, the Leibniz University Hannover, and the Physikalisch-Technische Bundesanstalt (PTB) in Braunschweig. The research was performed as part of the work of the Max Planck-RIKEN-PTB Center for Time, Constants and Fundamental Symmetries, an international group established to develop high-precision measurements to better understand the physics of our Universe.