Home / Physics and Astronomy / At future Mars landing spot, scientists spy mineral that could preserve signs of past life
13.11.2019

At future Mars landing spot, scientists spy mineral that could preserve signs of past life 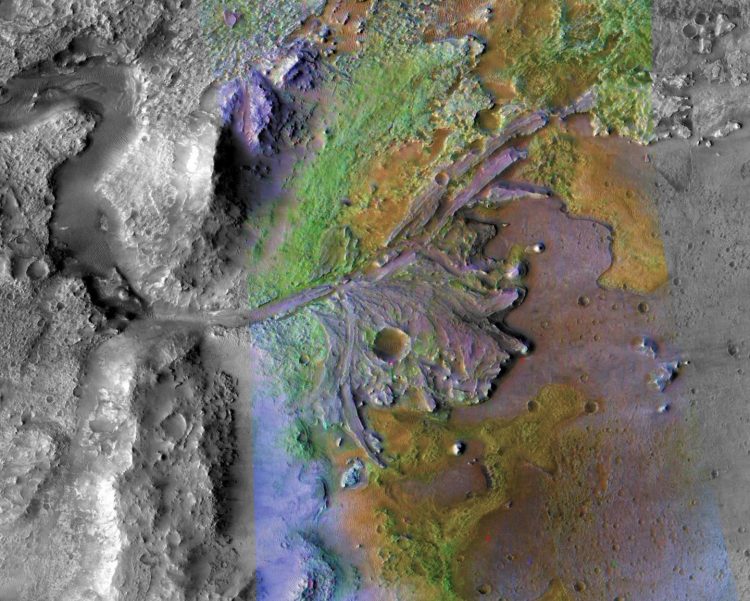 Jezero crater, where NASA plans to land a new Mars rover next year, is home to the remains of an ancient river delta. Researchers have now found deposits of hydrated silica, a mineral that's especially good at preserving microfossils and other signs of past life, near the delta. Credit: NASA/JPL/JHUAPL/MSSS/Brown University

“Using a technique we developed that helps us find rare, hard-to-detect mineral phases in data taken from orbiting spacecraft, we found two outcrops of hydrated silica within Jezero crater,” said Jesse Tarnas, a Ph.D. student at Brown University and the study's lead author.

“We know from Earth that this mineral phase is exceptional at preserving microfossils and other biosignatures, so that makes these outcrops exciting targets for the rover to explore.”

The research is published in Geophysical Research Letters.

NASA announced late last year that its Mars 2020 rover would be headed to Jezero, which appears to have been home to an ancient lake. The star attraction at Jezero is a large delta deposit formed by ancient rivers that fed the lake.

The delta would have concentrated a wealth of material from a vast watershed. Deltas on Earth are known to be good at preserving signs of life. Adding hydrated silica to the mix at Jezero increases that preservation potential, the researchers say. One of the silica deposits was found on the edge of the delta at low elevation.

It's possible that the minerals formed in place and represent the bottom layer of the delta deposit, which is a great scenario for preserving signs of life.

“The material that forms the bottom layer of a delta is sometimes the most productive in terms of preserving biosignatures,” said Jack Mustard, a professor at Brown and study co-author. “So if you can find that bottomset layer, and that layer has a lot of silica in it, that's a double bonus.”

For the study, researchers used data from the Compact Reconnaissance Imaging Spectrometer for Mars (CRISM) instrument that flies aboard NASA's Mars Reconnaissance Orbiter. The technique applied to the CRISM data used big data analysis methods to tease out the weak spectral signature of the silica deposits.

While the geologic context of the deposits suggests they could have formed at the base of the delta, it's not the only possibility, the researchers say.

The minerals could have formed upstream in the watershed that fed Jezero and been washed subsequently into the crater, by volcanic activity or later episodes of water saturation in the Jezero crater lake. The rover should be able to isolate the real source, the researchers say.

“We can get amazing high-resolution images and compositional data from orbit, but there's a limit on what we can discern in terms of how these minerals formed,” Tarnas said. “Given instruments on the rover, however, we should be able to constrain the origin of these deposits.”

The rover will be able to perform fine-scale chemical analysis of the deposits and provide a close-up view of how the deposits are situated in relation to surrounding rock units. It will also have a sensor similar to CRISM to link orbital and lander data.

That will go a long way to determining how the deposits formed. What's more, one instrument aboard the rover is able to look for complex organic material. If the silica deposits have high concentrations of organics, it would be an especially intriguing find, the researchers say.

And in addition to the work the rover does on site, it will also cache samples to be returned to Earth by future missions.

“If these deposits present themselves in the form of rocks that are big and competent enough to drill into, they could be put into the cache,” Mustard said. “This work suggests that they'd be a great sample to have.”

The research was funded in part by the NASA Mars Data Analysis Program (NNX13AK72G).