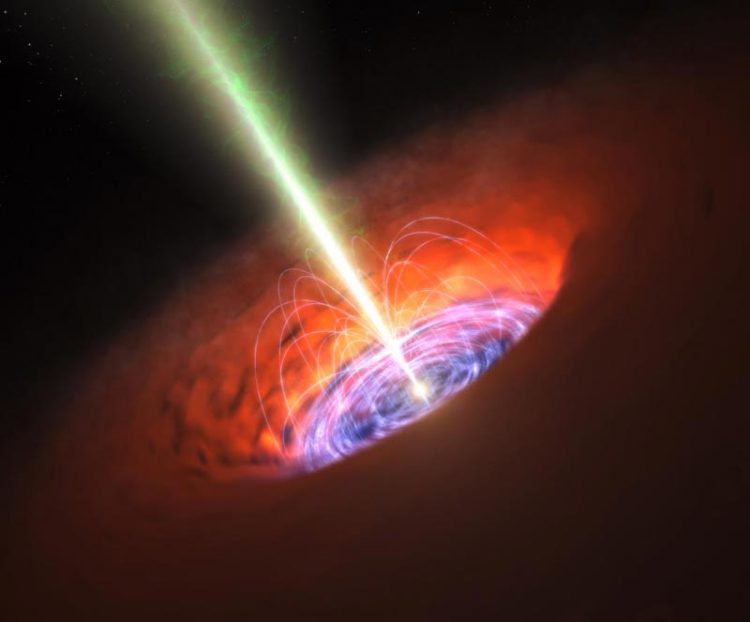 This artist's impression shows the surroundings of a supermassive black hole, typical of that found at the heart of many galaxies. The black hole itself is surrounded by a brilliant accretion disc of very hot, infalling material and, further out, a dusty torus. There are also often high-speed jets of material ejected at the black hole's poles that can extend huge distances into space. Credit: ESO/L. Calçada

Astronomers from Chalmers University of Technology have used the giant telescope Alma to reveal an extremely powerful magnetic field very close to a supermassive black hole in a distant galaxy. The results appear in the 17 April 2015 issue of the journal Science.

A team of five astronomers from Chalmers University of Technology have revealed an extremely powerful magnetic field, beyond anything previously detected in the core of a galaxy, very close to the event horizon of a supermassive black hole. This new observation helps astronomers to understand the structure and formation of these massive inhabitants of the centres of galaxies, and the twin high-speed jets of plasma they frequently eject from their poles.

Up to now only weak magnetic fields far from black holes — several light-years away — had been probed. In this study, however, astronomers from Chalmers University of Technology and Onsala Space Observatory in Sweden have now used Alma to detect signals directly related to a strong magnetic field very close to the event horizon of the supermassive black hole in a distant galaxy named PKS 1830-211. This magnetic field is located precisely at the place where matter is suddenly boosted away from the black hole in the form of a jet.

The team measured the strength of the magnetic field by studying the way in which light was polarised, as it moved away from the black hole.

“Polarisation is an important property of light and is much used in daily life, for example in sun glasses or 3D glasses at the cinema,” says Ivan Marti-Vidal, lead author of this work.

“When produced naturally, polarisation can be used to measure magnetic fields, since light changes its polarisation when it travels through a magnetised medium. In this case, the light that we detected with Alma had been travelling through material very close to the black hole, a place full of highly magnetised plasma.”

The astronomers applied a new analysis technique that they had developed to the Alma data and found that the direction of polarisation of the radiation coming from the centre of PKS 1830-211 had rotated.

Magnetic fields introduce Faraday rotation, which makes the polarisation rotate in different ways at different wavelengths. The way in which this rotation depends on the wavelength tells us about the magnetic field in the region.

“We have found clear signals of polarisation rotation that are hundreds of times higher than the highest ever found in the Universe,” says Sebastien Muller, co-author of the paper. “Our discovery is a giant leap in terms of observing frequency, thanks to the use of Alma, and in terms of distance to the black hole where the magnetic field has been probed — of the order of only a few light-days from the event horizon. These results, and future studies, will help us understand what is really going on in the immediate vicinity of supermassive black holes.”

More about the research

This research was presented in a paper entitled “A strong magnetic field in the jet base of a supermassive black hole” to appear in Science on 17 April 2015, vol 348, issue 6232.

Alma (Atacama Large Millimeter/submillimeter Array) — with its 66 gigantic 12-metre and 7-metre antennas – is an international astronomy facility located at 5000 metres altitude at Chajnantor in northern Chile. Alma is a partnership of Europe, North America and East Asia in cooperation with the Republic of Chile and is the world's largest astronomy project. Chalmers and Onsala Space Observatory have been part of Alma since its inception; receivers for the telescope are one of many contributions. Onsala Space Observatory is host to the Nordic Alma Regional Centre, which provides technical expertise to the Alma project and supports astronomers in the Nordic countries in using Alma.

Onsala Space Observatory is Sweden's national facility for radio astronomy. The observatory provides researchers with equipment for the study of the earth and the rest of the universe. In Onsala, 45 km south of Gothenburg, it operates two radio telescopes and a station in the international telescope Lofar. It also participates in several international projects. The observatory is hosted by Department of Earth and Space Sciences at Chalmers University of Technology, and is operated on behalf of the Swedish Research Council.