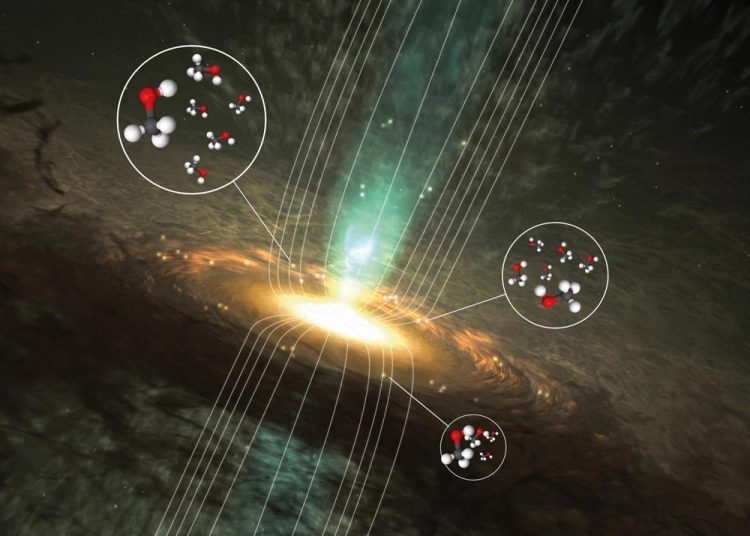 Magnetic fields play an important role in the places where most massive stars are born. This illustration shows the surroundings of a forming massive star, and the bright regions where radio signals from methanol can be found. The bright spots represent methanol masers -- natural lasers that are common in the dense environments where massive stars form -- and the curved lines represent the magnetic field. Thanks to new calculations by astrochemists, astronomers can now start to investigate magnetic fields in space by measuring the radio signals from methanol molecules in these bright sources. Credit: Wolfgang Steffen/Boy Lankhaar et al. (molecules: Wikimedia Commons/Ben Mills)

Over the last half-century, many molecules have been discovered in space. Using radio telescopes, astronomers have with the help of these molecules been able to investigate just what happens in the dark and dense clouds where new stars and planets are born.

Scientists can measure temperature, pressure and gas motions when they study the signature of molecules in the signals they detect. But especially where the most massive stars are born, there's another major player that's more difficult to measure: magnetic fields.

Boy Lankhaar at Chalmers University of Technology, who led the project, takes up the story.

“When the biggest and heaviest stars are born, we know that magnetic fields play an important role. But just how magnetic fields affect the process is a subject of debate among researchers. So we need ways of measuring magnetic fields, and that's a real challenge. Now, thanks to our new calculations, we finally know how to do it with methanol”, he says.

Using measurements of methanol (CH3OH) in space to investigate magnetic fields was suggested many decades ago. In the dense gas surrounding many newborn stars, methanol molecules shine brightly as natural microwave lasers, or masers. The signals we can measure from methanol masers are both strong and emitted at very specific frequencies.

“The maser signals also come from the regions where magnetic fields have the most to tell us about how stars form. With our new understanding of how methanol is affected by magnetic fields, we can finally start to interpret what we see”, says team member Wouter Vlemmings, Chalmers.

Earlier attempts to measure the magnetic properties of methanol in laboratory conditions have met with problems. Instead, the scientists decided to build a theoretical model, making sure it was consistent both with previous theory and with the laboratory measurements.

“We developed a model of how methanol behaves in magnetic fields, starting from the principles of quantum mechanics. Soon, we found good agreement between the theoretical calculations and the experimental data that was available. That gave us the confidence to extrapolate to conditions we expect in space”, explains Boy Lankhaar.

Still, the task turned out to be surprisingly challenging. Theoretical chemists Ad van der Avoird and Gerrit Groenenboom, both at Radboud University in the Netherlands, needed to make new calculations and correct previous work.

“Since methanol is a relatively simple molecule, we thought at first that the project would be easy. Instead, it turned out to be very complicated because we had to compute the properties of methanol in great detail”, says Ad van der Avoird.

The new results open up new possibilities for understanding magnetic fields in the universe. They also show how problems can be solved in astrochemistry – where the disciplines of astronomy and chemistry meet. Huib Jan van Langevelde, team member and astronomer at the Joint Institute for VLBI Eric and Leiden University, explains.

“It's amazing that such detailed calculations are required to reveal the molecular complexity which we need to interpret the very accurate measurements we make with today's best radio telescopes. It takes experts from both the chemistry and astrophysics disciplines to enable new discoveries in the future about molecules, magnetic fields and star formation”, he says.

Watch a video about how stars are born – and how methanol can now tell scientists more about how massive stars form.